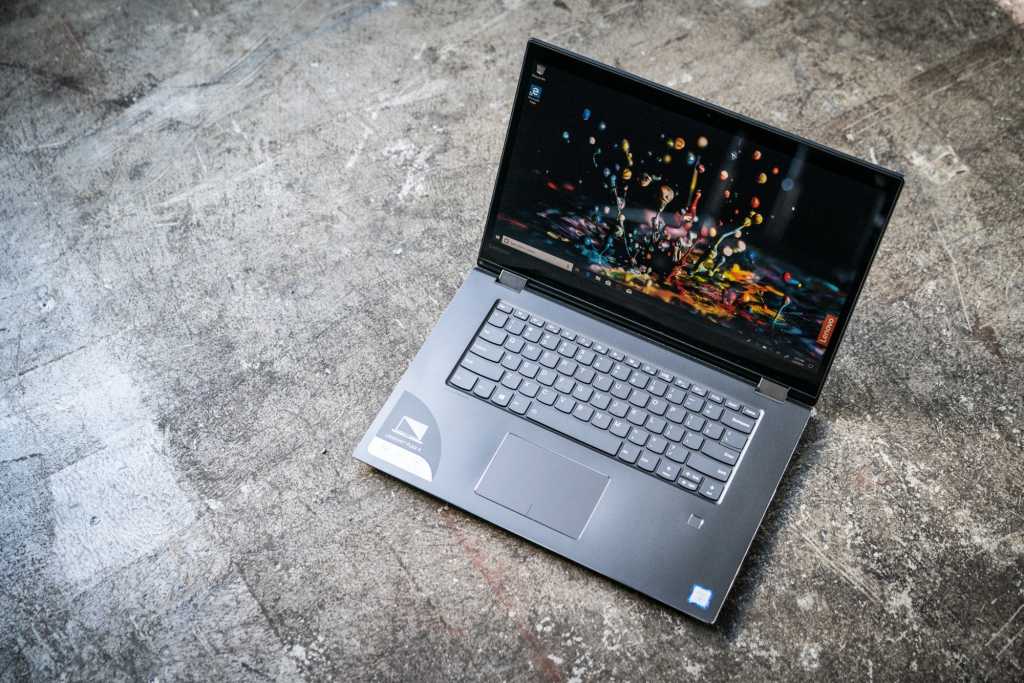 The Lenovo IdeaPad Flex 5 is a decent laptop, an overly large tablet, and a machine in desperate need of a few more fans to take full advantage of its powerful parts.

The Lenovo IdeaPad Flex 5 15 is a 2-in-1 struggling with an important question: How big is too big when it comes to one of these hybrids? Sure, it’s great to have both your tablet and laptop needs served by a single machine, but only so long as both are actually useful. With a 15.6-inch screen, the IdeaPad Flex 5 15 is an average-sized laptop, but an absolutely massive tablet.

Is it workable though? That’s what we investigated for our review.

Lenovo’s lineup of 2-in-1 devices is truly sprawling, encompassing multiple sub-brands and a broad range of prices. The IdeaPad Flex 5 15 (just Flex 5 from here on out) we reviewed falls in the middle of the spectrum, listing for a hair over $1,200 and featuring an Intel Core i7-8550U processor, integrated Intel HD 620 graphics, 16GB of DDR4 RAM, a 512GB PCIe SSD, and a 15.6-inch 1080p IPS touch display.

It’s worth noting this is the top end of the Flex line, and indeed quite a bit more expensive than the Flex 6 14 we tested last year. If you don’t mind dropping to a Core i5-8250U, 8GB of RAM, and a 5,400rpm hard drive you can get a Flex 5 for as little as $590, or less than half the price of the model we reviewed. But that’s an entirely different machine, at that point—one that, with an actual hard drive inside, is arguably less suited to the ultraportable lifestyle implied by a 2-in-1.

Hey, it happens. They’re both 15.6-inch convertibles, so of course Lenovo’s going to use the same chassis for each. It’s just…so bland. Devoid of any eye-catching design features, it’s simply a silvery-black slab of plastic with a nondescript Lenovo logo on the outside.

At least it’s inoffensive, and if we were talking about the $590 machine I’d be tempted to cut it some slack. Actually, that’s exactly what we did with last year’s Flex 6 14 review, where my colleague Ben Patterson describing it as “plain but professional.” Fair enough, but plain and professional isn’t very exciting once you leap to a $1,200 machine.

Two basic 360-degree hinges keep the Flex 5 together. They feel sturdy enough for any and all positions, but are more utilitarian than clever. Pop the lid and the quality improves ever so slightly. A metal palm rest area encompasses a decently large touchpad, a fingerprint reader, and an oversized keyboard. The latter is one of my favorite features on the Flex 5, with slightly convex keycaps and a pleasantly “chunky” feel to typing. The Flex 5 also eschews a numeric keypad, opting instead to give keys a bit of room to breathe. This is a relief for my fat fingers, even if the amount of open range on each side of the keyboard looks a bit odd.

Of course you’ll also find the Flex 5’s large 15.6-inch display. These larger 2-in-1s are neat, in theory, doubling as full-sized laptops instead of opting for a smaller screen in the name of portability. Practical, though? Not so much, in my experience. Flipping the Flex 5 into tablet mode, it feels incredibly unwieldy. And why wouldn’t it, at 0.8 inches thick and nearly 4.5 pounds? 14-inch convertibles are already a bit awkward as tablets. The Flex 5 is even bulkier, and the relatively fat bezels above and below the screen don’t help.

Thus I hesitate to recommend it as a 2-in-1. The larger screen is welcome for standard laptop use, but I think we’ve reached (and passed) the limit for convertibles. You could perhaps use it tented, perched on a desk or an airline tray while watching videos, but I’m hard-pressed to imagine using the Flex 5 as an actual tablet. It’s too thick and too heavy. And keep in mind we reviewed the SSD-equipped model. It seems ridiculous to offer the same machine with an HDD whirring away inside.

As for ports, the Flex 5 features a charging port, HDMI-out, a USB 3.0 port, USB-C, and a 3.5mm jack on the left-hand side, plus a second USB 3.0 port, an SD card slot, and the power button on the right. One oddly archaic feature: The Flex 5 draws power from a standard laptop brick with a barrel charging. That makes sense for the entry-level Flex 5, but a $1,200 convertible? That should definitely be using USB-C for power in 2019, not an inelegant cord complete with transformer wart at the halfway point.

The Flex 5’s speakers are adequate. Harman Kardon’s name lends a bit of respectability to what are fairly standard laptop speakers—shrill, with nonexistent bass and less volume output than you’d hope. They’ll work if you’re desperate, but even a budget pair of headphones would be a better choice.

The impracticality of some aspects of the Flex 5’s design shows up in its performance results. What’s interesting here is Lenovo improved the product line by stripping out hardware. The Flex 6 14  model we reviewed last year came equipped with a discrete graphics card, if you can believe it—an Nvidia GeForce MX130. Not much of a discrete graphics card, but it existed. This year’s version sticks to the aforementioned integrated graphics.

And yet as we noted last year, the MX130 actually performed significantly worse in 3DMark testing than competitors who relied on boring ol’ integrated Intel HD 620 graphics. That remains true, with our Intel HD 620-equipped Flex 5 posting a score of 4,315 in 3DMark’s Skydiver benchmark, compared to the Flex 6 14’s pallid 3,111.

It’s no gaming machine, but it’s at least on a par with other 2-in-1s in its price bracket—which is no surprise, as they all pretty much use the same HD 620 graphics.

There’s a catch, though. The lack of a discrete graphics card means more stress on the CPU, and more stress on the CPU means more heat. That, combined with the fact we’ve stepped up to a Core i7-8550U from last year’s Core i5-8250U, means our Flex 5 needed much better heat dispersion than the previous model—and it didn’t get it. Even during menial tasks, the fans (or perhaps fan, singular) whir away nonstop, and still the machine withers at the first sign of effort. Even though the Core i7-8550U is theoretically a better-performing part, the Flex 5’s scores hewed closely to those of its Flex 6 14 cousin when it came to CPU-heavy benchmarks.

For instance, PCMark 8’s Work Conventional benchmark allows us to test day-to-day web browsing, word processing, and so on. Here, the Flex 5 posted 3,230 compared to the Flex 6’s 3,291—well within the margin of error where the two machines might as well be identical.

Next we run a HandBrake test to see how the machine performs when under load for a significant period of time. This involves using HandBrake to convert a 30 GB MKV file to the Android Tablet preset, a CPU-heavy task that can really suffer from heat-related performance throttling.

The Flex 5 finished the job in an hour and 10 minutes, slightly better than last year’s model but still far slower than a Core i5-8250U with adequate cooling—to say nothing of other Core i7-8550U laptops. It’s enough to make you wonder why Lenovo opted for the more expensive part in the first place, given the Flex 5 clearly isn’t taking advantage of that power except in short bursts.

Lastly, we do a battery rundown by looping a 4K video at 250 nits’ brightness—which, as I said above, wasn’t possible with the Flex 5. Thus we looped the same video at the max brightness of 245 nits, which gave us about eight and a half hours’ runtime.

Spectacular? No, and indeed you can find comparably priced 2-in-1s with much better battery life. That said, I suspect Lenovo opted for the diminutive 52.5Wh battery to save weight, and I can’t blame them given the Flex 5’s already significant bulk.

The Lenovo IdeaPad Flex 5 isn’t a bad machine, just an awkward one. It fulfills every promise, checks every box Lenovo says it will. It is technically a 2-in-1 machine. It’s just that the laptop part of this equation works significantly better than the tablet part, even though you’re paying for the luxury of a 2-in-1. Combine that with a lackluster aesthetic and dim screen, and it’s hard to justify the Flex 5’s existence. Lenovo’s own Yoga line outclasses it in every way, for just a few dollars more. Look to the Yoga first, if you’re set on a Lenovo 2-in-1.