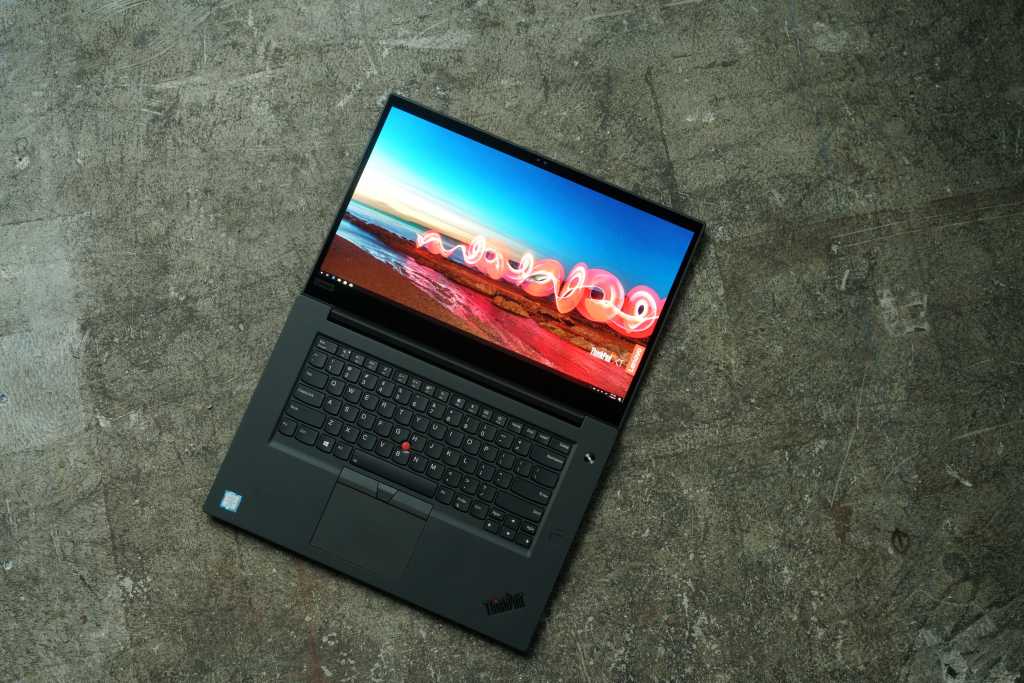 Lenovo’s Thinkpad Extreme X1 gives up some battery life with its 4K panel, but its upgrade options, built-quality and delectable 4 lbs. weight makes it hard to beat for a business workhorse laptop.

The Lenovo ThinkPad X1 Extreme is not for the avocado-toast-eating youths. You know, the ones who take a laptop clad in brushed aluminum or maybe rose gold to Starbucks so they can fill out an application for grad school.

When a real businessperson thinks about the coolest laptop they could use to put together a proposal for a hostile takeover of a multi-billion dollar competitor with 25,000 employees, they think all black and all business. And yes, Lenovo’s famous ThinkPad X1 Extreme is of the latter sort. It channels Fortune 100, a bull market, and power suits. And with its 15-inch display, it provides extra real estate for that your huge spreadsheets and slick presentations—with surprisingly little weight penalty. Just don’t expect the performance to be as extreme as its name.

What’s inside the ThinkPad X1 Extreme

The screen represents Lenovo’s first foray into a ThinkPad X1 with a 15.6-screen. The company doesn’t scrimp, either. Our review unit came with a beautiful 4K UHD touch panel with a max brightness of 400 nits. The AU Optronics IPS panel (or IPS-like anyway) is an 8-bit panel, but Lenovo’s partnership with Dolby lets the panel support Dolby Vision HDR content. So, while not a true 10-bit panel, it can look richer if the content actually supports it.

Lost in the specs might be one of the most amazing features of the ThinkPad X1 Extreme: its weight. Coming in at exactly 4 pounds with a 4K UHD touch screen (which typically adds a few ounces), it’s noticeably lighter than, say, Dell’s XPS 15 at 4.25 pounds. Add touch to the XPS 15 (most of it is the Gorilla glass in the panel) and you’re up at 4.5 pounds. Many other workhorse laptops actually push up closer to 5 pounds.

The only other laptop we can think of that’s this light and svelte is Apple’s MacBook Pro 15, also a flat four pounds. (without touch). But the MacBook Pro 15 compromises on performance for its weight and size—does the ThinkPad X1 Extreme do the same? More on that later.

The keyboard and trackpad on top of the hardware matter, too, and the ThinkPad X1 Extreme sticks with tradition. Sure, some ThinkPad aficionados will always think fondly back to a “their favorite”ThinkPad keyboard design that dates back to the George Herbert Walker Bush administration, but the company’s keyboards have always been among the best. If your Mac friends tell you something doesn’t “feel right” about the ThinkPad’s keyboard, tell them it’s the generous 1.7mm of key travel.

The trackpad is correctly and proportionately sized, without being so large that you have to pray to the palm rejection gods to keep from wiping whole sentences by accident. The surface of the trackpad has a very slightly friction to it, the usefulness of which will fall to personal preference (our fingertips prefer glass-smooth trackpads these days).

There is also, of course, the famous TrackPoint. Folks who grew up on this side of the millennium probably have no idea what that nub is or what purpose it serves, given the quality of today’s trackpads, but it’s essentially a very small joystick that acts like the mouse. The tip can be replaced with any number of nubs. While it may seem like a useless redundancy, we actually find the nub pretty comfortable to use when, say, standing above the laptop. It’s just good to have options.

As a workhorse laptop, the ThinkPad X1 Extreme has a good port selection. On the left side there’s a full-size HDMI 2.0 port, an analog headset jack, two Thunderbolt 3 ports,  and a dedicated ethernet dongle port using a proprietary connector. Don’t confuse this with a miniUSB or miniDisplayPort. It’s actually for  Lenovo’s Ethernet Extension Cable,  which supports remote management features for the laptop that can’t be done with most conventional USB ethernet adapters.

The large square plug at the end isn’t a USB Type A plug, but rather Lenovo’s proprietary square prong adapter that it’s used since 2012. Although many will groan that a proprietary plug is old-fashioned, the plug means companies with barrels of Lenovo laptop power plugs will always have a spare. The longstanding use of the plug also means aftermarket plugs are very affordable.

The stock 130-watt power brick that comes with the ThinkPad X1 Extreme is quite petite, so you shouldn’t mind keeping it with you while traveling. You could also charge using one of the Thunderbolt 3 ports, but only at very reduced rates. In our tests, we couldn’t get more than 20 watts out of a 45-watt HP USB-C charger or Innergie PowerGear USB-C 60 watt adapter.

Moving on to the right side of the ThinkPad X1 Extreme, we see two USB Type A 5Gbps ports, a Kensington lock port, and an SD card reader. The port is semi-flush, so you can leave an SD card inserted most of the time and not notice. Performance of the slot, however, was pretty lackluster: The best we could coax out of a Sandisk Extreme 256GB card was 84MBps reads and 67MB writes.

Another perk you’ll find with larger corporate laptops is generous upgradability. The available storage upgrades are plentiful and easy. Remove a set of Philips-head screws from the bottom of the laptop and carefully lift off the cover, starting from the rear of the laptop. Once the magnesium lid is if off, you have easy access to two SO-DIMM slots and two M.2 NVMe slots, as well as the wireless radio module and battery. While some might bemoan the lack of a 2.5-inch drive bay, the size and cost of M.2 SSDs have come down tremendously.

The decision to go with dual M.2 slots is probably a better option as well. Laptops that do offer 2.5-inch drive support, such as the XPS 15, do so at the cost of battery capacity. The dual M.2 setup maximizes battery potential.

With a name like ThinkPad X1 Extreme, you might understandably assume this laptop would blow everything else out of the water in our performance tests. It doesn’t, but it does hang tight with similarly configured systems.

The first test we run is Cinebench R15. It’s a popular 3D rendering benchmark that gives you an indication of how well the laptop’s CPU will perform when all of the cores are in use.

The ThinkPad X1 Extreme starts with an apparent advantage: its Core i7-8850H, which features clock speed ranges from 4.3GHz to 2.6GHz. When we compared it to laptops with Core i7-8750H chips that range from 4.1GHz to 2.2GHz, however, we didn’t see the expected gap due to clock speed differences. For example, the Dell XPS 15 9570 with the step-down Core i7-8750H actually pulls just even with the ThinkPad X1 Extreme in Cinebench multi-threaded performance.

The ThinkPad X1 Extreme also somewhat disappointed us when we set CineBench R15 to use just a single thread. Again, while it’s a 3D rendering task, it’s a decent stand-in for what you’re likely to see in single-threaded tasks such as Microsoft Office and Google Chrome. On paper, we’d expect to see a small performance bump from the faster clock speed on the ThinkPad X1 Extreme’s CPU, but once again it falls slightly behind the XPS 15 9570.

Remember: The ThinkPad Extreme X1 did not perform poorly, it just didn’t perform better than other very fast laptops. The culprit is likely the design. Laptop performance is typically dictated by choices the vendor makes to manage cooling and noise. Add in the desire to keep a laptop light or thin, and performance can be all over the place.

We should also add that under longer loads, which heat up the CPUs for a longer duration, it’s mostly a wash. This next chart shows you how the laptops performed when encoding a 30GB, 1080p file using the free HandBrake utility. The mobile 6-core chips are all about the same.

The reasons to choose the Core i7-8850H in the ThinkPad X1 Extreme go beyond performance. If you look at the CPU at Intel’s ARK CPU database, you can see three other notable features besides clock speed: VPro, Trusted Execution Technology, and Stable Image Platform Program.

All three play to the business suit corporate bonafides of the ThinkPad X1 Extreme. VPro relates to fleet management, Trusted Execution Technology addresses security, and Stable Image Platform Program means the CPU will be around and supported for at least 15 months. SIPP means companies buying laptops by the pallets can feel warm and fuzzy that the image they have for a laptop won’t change for a long, long time.

To measure the performance of the GPU, we first use 3DMark’s FireStrike test, which is a synthetic graphics load. The closest laptop with the same GPU is Dell’s XPS 15 9570, which takes a slight lead in performance.

Using a real game, Rise of the Tomb Raider, we see the graphics performance of the ThinkPad X1 Extreme come in just a hair slower than the Dell XPS 15 9570’s.

Perhaps the most important number in any laptop you’ll actually use unplugged is the battery life. To measure that, we set the screen to a relatively bright 250 nits to 260 nits and loop a 4K movie, with a set of in-ear headsets plugged in, and the radios set to airplane mode.

Battery performance of the ThinkPad X1 Extreme was fair given its specs. If you’re looking at our result charts and frowning at the mere 331 minutes it lasted, you should remember that the Lenovo ThinkPad X1 Extreme packs a 4K UHD panel. With four times the resolution of the 1080p panel of the Dell XPS 15 9570 we tested, you’re going to consume a lot more power to drive light through those smaller holes.

Although it likely won’t get the same battery life as the XPS 15 9570 (which can have a nearly 20-percent larger battery) it, we suspect you’d get another two hours at a minimum by going with the lower-res screen. If you want better battery life (at the cost of resolution, of course), skip the 4K panel.

We should also remind you that video playback is a cakewalk for modern laptops. Your mileage will vary. Hammer the CPU or GPU hard, and battery run time will drop to 90 minutes if you’re lucky.

Overall, the ThinkPad X1 Extreme is an impressive laptop, but is it a Dell XPS 15 killer? That depends. On the performance front, it tracks closely. But where it really shines is weight. While you may scoff at an 8-ounce difference (when similarly configured with touch panels), you’ll feel that in your bag and on your shoulder.

As to corporate features, the ThinkPad X1 Extreme certainly aces the XPS 15 with its support for vPro, SIPP and TXT. (Dell, of course, would like to remind you of its corporate offerings in the Precision 5530.)

Those corporate features don’t come cheap. Whether that’s worth it probably depends on your view of what a business laptop should be.