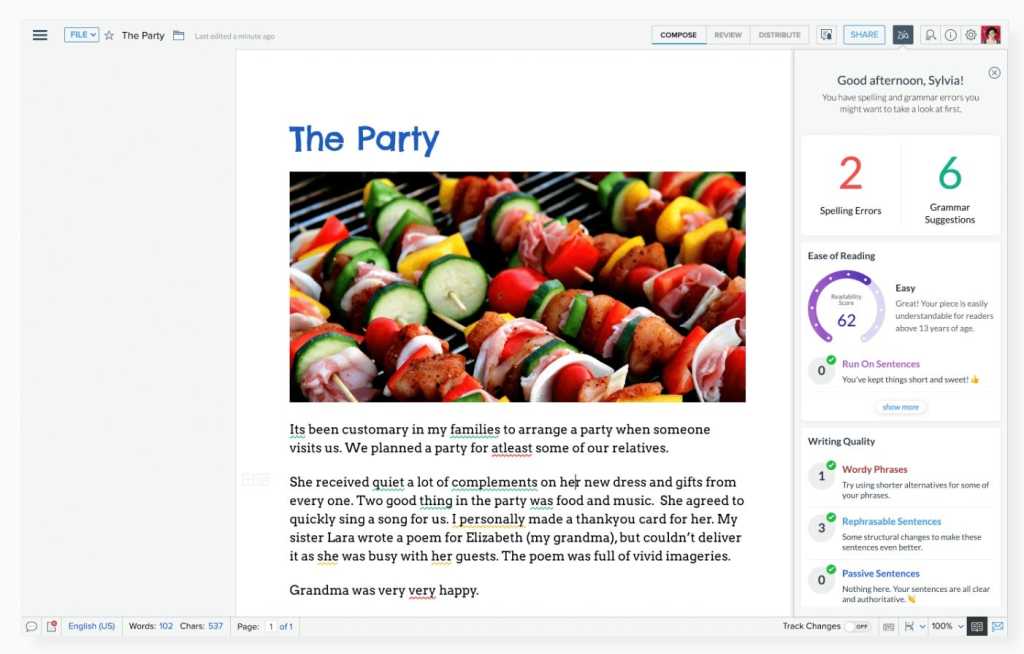 If you don’t want to pay for Microsoft’s AI-powered Microsoft Office, there are alternatives—including Zoho’s free Zoho Office Suite. Zoho’s alternatives to Word, Excel, PowerPoint, and Google Keep launch today, complete with their own intelligent features that are arguably friendlier than Microsoft’s own.

Zoho does charge $3 to SMBs to use the suite, and $6 per user for enterprises. If you’re a single home user, you pay nothing, though you’ll need to sign up for a Zoho account. All of the Zoho Office Suite apps are available on the web as well as on iOS and Android, but require an Internet connection. The exception is the new version of Writer, which is now available in an offline mode.

Writer’s new features include the Zia-powered spelling and grammar checker, which includes Flesch-Kincaid readability analysis as well as writing tips; offline mode and a dark mode; and forms and signature integration. In Sheet, Zia can automatically construct pivot tables and reply to plain-language queries, even on mobile. And in Notebook, Zoho’s Zia now constructs the sort of “cards” you might find in Twitter or Facebook, where a link will expand to show the title and any art associated with the link.

What this means to you: Microsoft’s Office suite is undoubtedly the powerhouse office suite, and as we’ve recently seen, Microsoft will do just about anything to keep you locked into an Office 365 subscription. Zoho, though, has been quietly providing a solid alternative for years. You can still import Office files (Writer, for example, accepts DOCX, DOC, DOT, TXT formats and more, and exports to DOCX, too) while keeping your files within Zoho’s workflow. Microsoft may make it a bit easier to save documents in its OneDrive cloud, but you can also connect to a cloud service within Zoho. The key point, of course, is that it’s all free to the home user.

Zoho’s apps have always catered to the business user, even if it’s an individual working at home. Many of Writer’s new features are geared toward helping automate business tasks like filling in forms, or integrating with Zoho’s other tools like Mail, Cliq, and Zoho Connect. But Zia’s Writer integration should directly appeal to the consumer.

As you type, Writer reads your text and tries to improve it, with color-coded squiggles that apply to, say, passive constructions, wordy phrases, and run-on sentences. Writer sums up all of these in a sidebar to the right of the text. (Zia doesn’t appear to be present in offline mode, however.)

It should go without saying, but Zoho says that all of your files and text will remain confidential, and will never be sold to advertisers.

Other features within Writer 5 include:

Microsoft has made AI a focus of Excel over the past few years, and the new version of Sheet is no different. Zia is designed to make it easier to parse your data, especially within the mobile version of Zoho’s Sheet.

Within Sheet, Zia will now recommend and construct specific charts, allowing you to drag and drop them within an existing spreadsheet. Zia will also scan your spreadsheet for data and then group it into pivot tables—connected charts that summarize your data, and adjust on the fly. Zia also allows you to query the data using plain English, though it’s not quite clear how deep this capability goes.

Zoho taps AI in other ways, including a new data-cleaning tool that can sift through a spreadsheet and find duplicates and errors. As you enter data, sparklines provide in-cell graphs that can give you a snapshot of trends. Finally, if the AI isn’t enough, you can apply your own with drag-and-drop custom functions, as well as new data APIs. Zoho Sheet now integrates with Zoho Flow and Zapier to provide automated workflows with third-party data.

Other new Sheet features include:

The first version of Zoho Notebook looks a lot like Google Keep, and that’s a good thing. Like Keep, the app’s mobile interface appears to be the primary form of interaction, though there’s a web interface as well. (Each syncs to the web automatically.) There are several types of Notebook notes: plain text, a checklist, audio, photo, sketch, file, and a “smart” note.

It’s the last format where Zoho intelligently applies context to a note, such as a recipe. Put a link to a recipe inside a smart note and Zoho Notebook will not only list the entire recipe with illustrations, but turn the ingredient list into a checklist as. Drop a YouTube link into a smart note, and it will open the player; drop a link to a news site and it will expand the story. More types of smart cards or notes will be added over time, Zoho said.

Zoho’s presentation app doesn’t appear to have received as many updates as the other apps, but Zoho’s touting a couple of new features. Its interface allows users to select from a variety of themes, and Show now allows users to run presentations on Apple TVs as well as Android devices, by turning the presenter’s mobile phone into a controller and using it to control the presentation on multiple TVs at once. Again, it’s all free for home use.