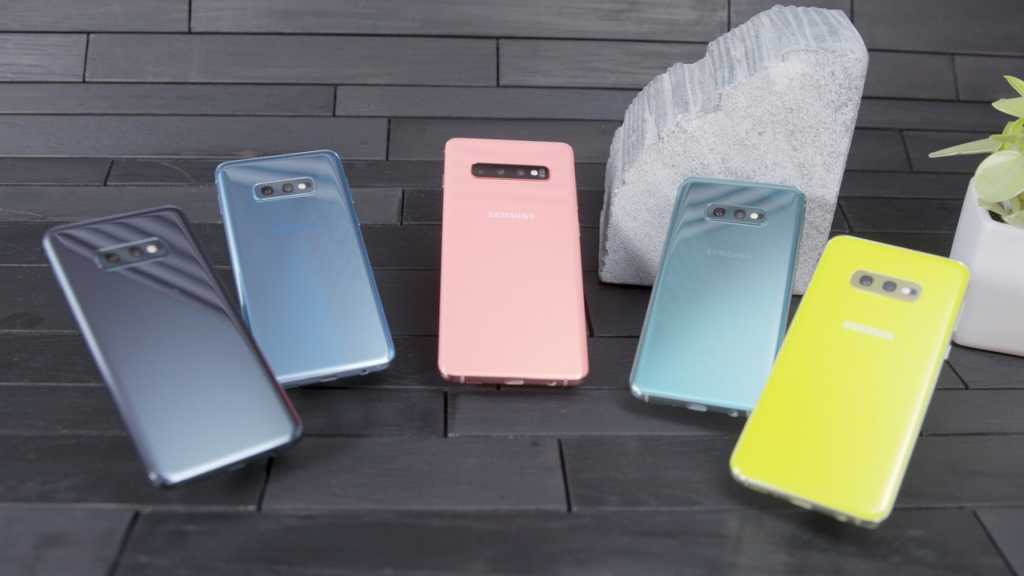 At long leak, the Samsung Galaxy S10 has arrived. And, well, it’s pretty much exactly what we thought it would be, with three sizes, a hole in the display for the front camera, and all sorts of new color options. Here’s a quick look at the specs before we start:

But even with months of leaks and rumors, there were still a few announcements during Unpacked that legitimately surprised us:

This was the big one, literally. While we fully expected the 5.8-inch S10e, the 6.2-inch S10, and the 6.4-inch S10+, Samsung also teased its first 5G phone in the form of a 6.7-inch behemoth with a 3D depth-sensing rear camera and a time-of-flight sensor on the front, along with a 4,500mAh battery, all firsts for a Galaxy phone.

While the upcoming 5G model may have a time-of-flight camera for enhanced AR and stronger facial recognition, Samsung opted not to include the next-gen sensor in any of its LTE models, even the budget-busting S10+. That means facial recognition still uses the regular camera and can be spoofed relatively easily. With the LG G8 packing one and Apple’s TrueDepth camera replicating the functionality for Face ID and portrait lighting, Samsung is going to have to play a serious game of catch-up with the S11.

The S10+ has vapor chamber cooling

While the S10 and S10e opt for standard heat pipes to keep their chips cool, the S10+ ups the ante with a new vapor chamber to keep temperatures low. It’s not something you can see, but you should be able to feel it working—especially if you’ve ever streamed music while running maps in the car. Plus it saves space and efficiency, two things you can never have enough of inside your phone.

Wireless PowerShare is on all three models

We knew from rumors and leaks that the S10 would include reverse wireless charging, and it’s just as easy and convenient as we hoped. With just a tap, you can turn your S10 into a wireless charging pad that can charge its remaining juice with any Qi-enabled phone. But we didn’t know that all three models would be receiving it. While other phone makers reserve high-end charging features for the most expensive models, Samsung hasn’t crippled the functionality on the S10e, despite its lower price tag.

You can take 4K selfies and videos

The front camera isn’t usually an area of focus, but Samsung has improved it in a big way. While the S9 included a standard 8MP HD cam, the S10 packs a 10MP UHD camera for crystal-clear selfies and video. On the S10+, you get two front cameras for better portraits. That means you won’t need to sacrifice quality when you want to use the front camera anymore.

It comes in hot pink

There were lots of crazy color rumors leading up to the launch of the S10—including a garish yellow color—but one we didn’t expect is the most interesting of all. Called flamingo pink, it’s bright, cheerful, and super-unique—and we can’t wait to get one.

When pictures started rolling in of Galaxy S10’s without a fingerprint sensor on the back, it was clear that Samsung was going the in-display route. But while other phones such as the OnePlus 6T feature an optical sensor that uses light to read your fingerprint, the S10 uses sound waves to map the whorls and loops. That allows for a wider scanning area and should result in better unlocking accuracy.

When the Note 9 released with 512GB of storage and support for a 512GB memory card, it was the world’s first phone capable of putting 1,024 gigs in your pocket. But that required the purchase of a 512GB micro SD card, which can be expensive (check out Gordon Mah Ung’s SD card shopping advice). With the S10+, you can get a terabyte of internal storage, enough space for pretty much anything. It’s not cheap, but can you really put a price on all the ribbing you can give your iPhone friends?

You can max it out with a whopping 12GB of RAM

With higher entry-level prices than ever before (yes, even counting the S10e), Samsung has packed its new Galaxy phones with some serious specs. All three handsets have the Snapdragon 855 processor, a minimum of 128GB of storage, and at least 6GB of RAM. That’s impressive enough, but the top-of-the-line S10+ goes even bigger, jumping straight past 10GB of RAM to an unheard-of 12GB, almost as much as the 15-inch MacBook Pro.

Samsung has been using premium materials in its phones for several years now, and the S10+ does it again with the introduction of a new ceramic finish in white or black. We saw it in leaked press renders ahead of the announcement and we weren’t all that impressed, especially next to the super-cool “prism” colors. But pictures don’t really do it justice. In person, the ceramic model really is every bit as luxurious as its name implies. It’ll cost you—Samsung is offering it only with the 512GB and 1TB options on the S10+—but the high-gloss, ultra-durable finish might just be worth the extra dough.