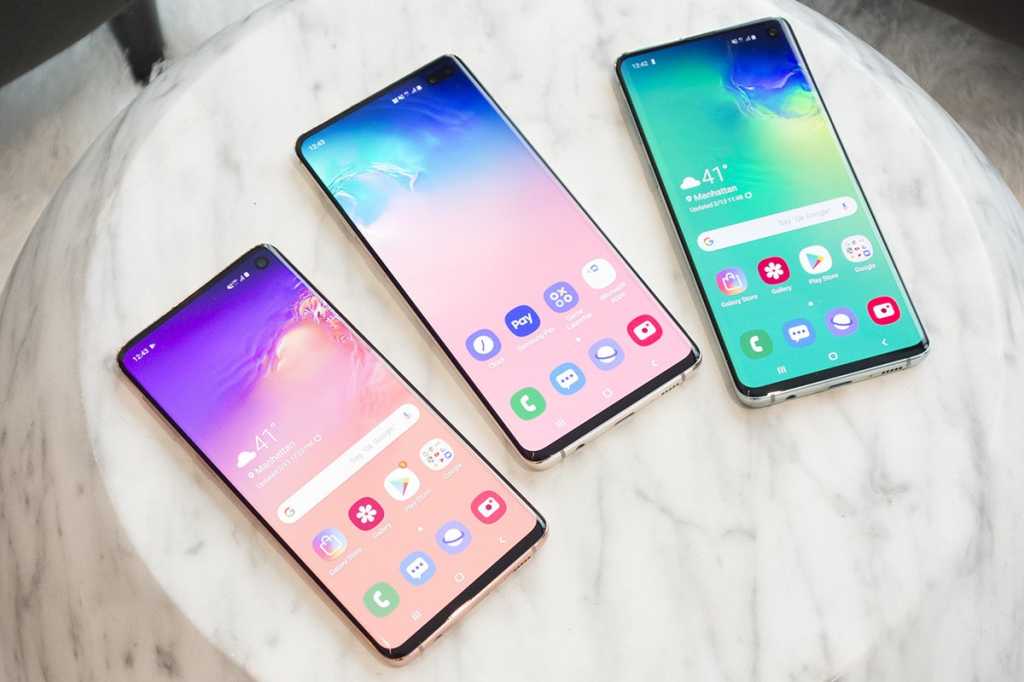 With the screen off, the Galaxy S10+ is virtually indistinguishable from the Galaxy S9+. It’s not until you turn it on that you notice just how different it is.

You’ve no doubt read about the camera hole in the Infinity-O display, Samsung’s answer to the dreaded notch. Well, it’s just as awkward in person as it is in pictures. Samsung was able to put the rest of the sensors—accelerometer, barometer, proximity, etc.—under the screen, but the camera isn’t so easy to hide. Hence it remains as an asymmetrical eyesore in the upper right corner of the screen, like so many dead pixels.

On the S10+, the double-wide hole is particularly unsightly, as Samsung needs the space for two cameras, the second being a 3D depth-sensing lens to aid with background blur and lighting for portraits.

And, really, the dual front camera is the main differentiator between the two phones. The S10 and S10+ are so similar, in fact, I had a difficult time discerning which one I was holding during my brief time with them.

Granted, this won’t be an issue for anyone who buys one, but it does speak to the redundancy of the two models: The S10 and S10+ have the same Quad HD display, the same rear triple-camera array system buoyed by a 16MP Ultra Wide lens, the same 8GB of RAM and 128GB of storage, and the same Snapdragon 855 processor.

Samsung’s flagships feel closer than ever in size and performance, and without enough time to get too deep into what they can and can’t do yet, the main difference appears to be the second front camera and the larger hole that accomodates it.

A new splash of color

With the 5.8-inch iPhone XS and 6.5-inch XS Max, or even the S9 and S9+, there’s a clear difference in pocketability. But with the S10 increasing to 6.1 inches, the three-tenths-of-an-inch difference between it and the 6.4-inch S10+ doesn’t matter nearly as much.

But that’s not to say the two S10s don’t make a strong first impression. The Infinity styling that Samsung introduced with the Galaxy S8 has been refined even further here, and it’s nearly perfect. The unequal forehead and chin remain, but they’re smaller than ever, and with a 90-plus-percent screen-to-body ratio, it almost feels like you’re holding an edge-to-edge piece of glass.

The two models share a trio of “prism” colors—black, white, and blue—that have a gorgeous iridescence. There’s also an eye-catching “flamingo” hue that’s hot-but-not-too-hot pink. And if you opt for the 512GB or over-the-top 1TB S10+, you can pick a white or black ceramic finish, each of which oozes elegance.

With very little on the back of the S10 to draw your eye, your color choice will stand out more than it ever has on an S model, and I suspect we’ll see a lot of clear cases to support this launch. The horizontal camera array gives the back a minimalist look even with a third lens. For this you can thank Samsung’s decision to dump the rear fingerprint sensor—which it never really knew where to put anyway.

Rather than the old fingerprint sensor, you get an ultrasonic sensor built into the display, and it works just like the optical ones on the OnePlus 6T and Huaewei Mate 20 Pro. The use of sound waves should make authentication speedier and more reliable in low light, and in demos it worked about as fast as the S9’s physical scanner. But this also means some screen protectors will be awkward and ugly. Expect weird circular cutouts in the center of the screen to allow the scanner to operate.

And while we’re talking about awkwardness, let’s go back to those camera holes. On the S10, the camera hole is relatively easy to overlook, but on the S10+ it’s big enough to noticeably upset the status bar, push content a couple millimeters lower than on the S9+, and force movies and videos into less-than-optimal aspect ratios. The S10+ will no doubt be the fastest, brightest, and most powerful Android phone when it launches, but also one of the most polarizing.

At the lower end of the S10 spectrum is the newest entry to Samsung’s family of phones, the S10e. Samsung’s answer to the iPhone XR, it has the same $750 price tag as Apple’s entry-level handset, and like that phone, its screen is its most notable downgrade. Here’s how the specs compare:

But while the S10e’s screen looks quite inferior on paper, in person it’s difficult to tell the difference between it and the S10, at least in terms of pixels. The design, however, is very different. Next to the other S10 models, the S10e looks like a dozen other faceless phones, with a 142.2 x 69.9 x 7.9 mm frame that feels chunkier than the S9’s 147.7 x 68.7 x 8.5 mm frame. That’s due to its “flat” design that shows off its bezels rather than draping them over the side of screen.

The other two differences in the S10e are the camera (which is dual array rather than triple) and the fingerprint sensor, which is integrated into the power button like the old Sony Xperia phones. This feels a bit retro for a 2019 Galaxy phone and requires a bit of finger finesse while scanning, but it’s still better than the camera-smudging sensor placement on the S9 and S10.

And that’s pretty much the only buying decisions you’ll need to make with the S10e. For $150 less than the S10 and $250 less than the S10+, you get a Snapdragon 855 processor, a respectable 6GB of RAM and 128GB of storage, and a 3,100mAh battery. It even has Samsung’s new reverse wireless changing PowerShare feature. Whether it struggles like the iPhone XR remains to be seen, but Samsung is definitely employing a similar strategy, creating a third tier that still plays in the premium space.

Confusion in the ranks

I walked away from my brief time with the S10 lineup with a bit of confusion. On the one hand, the launch of the S10e brings a lower-cost alternative that doesn’t skimp on the high-end specs. But on the other, the S10 and S10+ have much higher starting prices than their S9 counterparts. And with ever-increasing screen size and parity, the existence of both models is more head-scratching than ever.