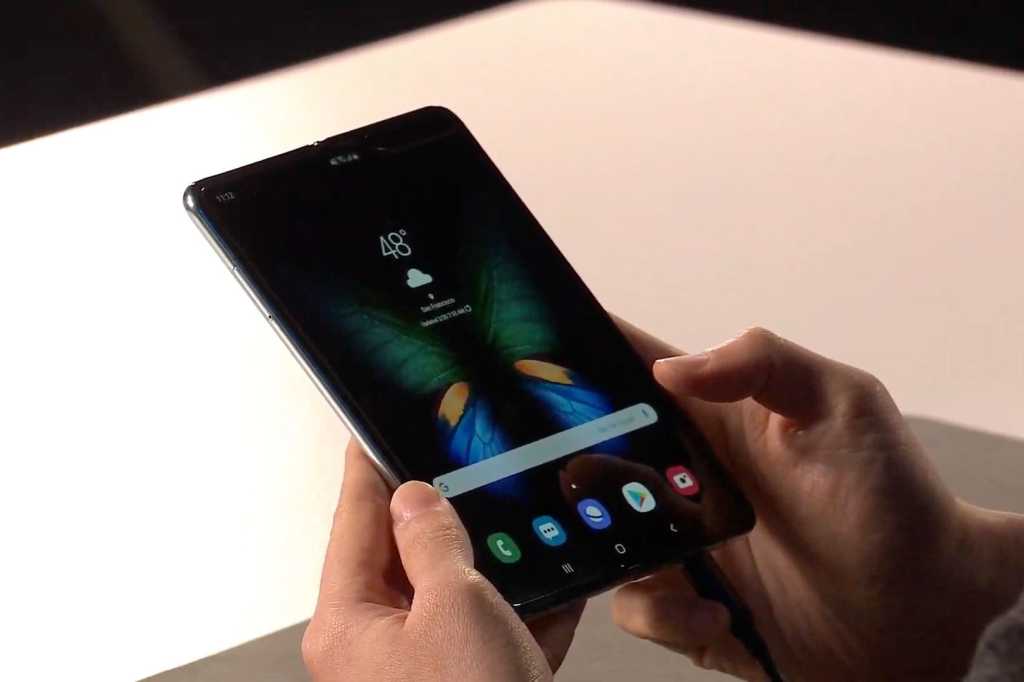 It’s been a long time coming, but now it’s here. Samsung has unveiled its first foldable smartphone that isn’t a pie-in-the-sky concept or carefully concealed prototype. In fact, you’ll be able to buy the Galaxy Fold on April 26 for the low price of $1,980.

And you thought the iPhone XS Max was expensive.

But cutting-edge technology doesn’t come cheap, and the Galaxy Fold is as cutting-edge as it gets. Built around a tablet-sized Infinity Flex display, the phone is somewhat similar to the prototype we saw at the developer’s conference last year, with a chunky frame, big bezels, and the mother of all notches. In short, the Galaxy Fold is pretty much what every first-gen technology started as: expensive, awkward, and clunky.

But the Galaxy Fold has accomplished its main task: to whet our appetites for the future.

Multi-tasking with a purpose

On the outside, the Galaxy Fold has a 4.6-inch screen, while a massive 7.3-inch QXGA+ awaits on the inside. Samsung hasn’t shared every spec, but we know it will be packed with cameras, overflowing with RAM, and filled with batteries:

Samsung has also built a “a sophisticated hinge with multiple interlocking gears” that can withstand hundreds of thousands of folds and unfolds. It’s got speakers tuned by AKG and supports universal flash storage 3.0 for super-fast file transfers. It comes in a trio of funky colors. Even the hinge is color-customizable.

But the coolest part of the Galaxy Fold is how it works. Samsung worked closely with Google on a specialized version of Android that can take advantage of the large display. It can run three apps at the same time, switch between the small and large display, and run full-screen apps alongside small-screen ones. The processor and RAM should be enough to keep everything humming along. Once all of the inevitable bugs are ironed out, the Galaxy Fold will no doubt impact how the rest of our phones and tablets operate.

The result is a true multi-tasking system on a phone-sized device, one that lets you comfortably view three apps at the same time and drag content among them. App continuity lets you jump in and out of views. When you’re looking at a map on the outside screen, for example, you can open the phone, and that map will expand to fill the inside screen. When the phone is opened, a unique side dock lets you bring up two additional windows alongside the main one. It’s multitasking like we’ve never seen on an Android device. I have to wonder why Samsung or Google never considered this for tablets before now.

Look to the future

In demos, the Galaxy Fold is very impressive. Samsung has truly considered the hows and whys of folding phones in the development of the Galaxy Fold, and the result is an impressive first attempt. But I don’t want one. I want the model that’s going to release in 2021.

Samsung billed the Galaxy Fold as a “one-of-a-kind luxury device,” and with a near-$2,000 price tag it certainly is. Few people are going to be able too afford one. Even fewer will be willing to take the plunge on such an untested piece of technology.

You can almost literally see the compromises Samsung had to make. When folded, the phone is about as thick as two Galaxy S10’s held together. There’s a huge notch on the right side of the inside display to hold the camera and other sensors. The front display has an awkwardly tall aspect ratio–apps look like they’re floating in midair, with dead space all around.

Despite all that, the Galaxy Fold is an exciting device. Five years from now, when Samsung unveils the Galaxy Fold 3 with a $1,299 price tag and a refined design like the one in its “Future” commercial, it’s going to be the gotta-have-it device that puts all other smartphones to shame.

Samsung is definitely onto something with the form factor, multitasking, and flexibility of the Galaxy Fold. It’s going to take time to get there, but it’s certainly closer than it’s ever been.