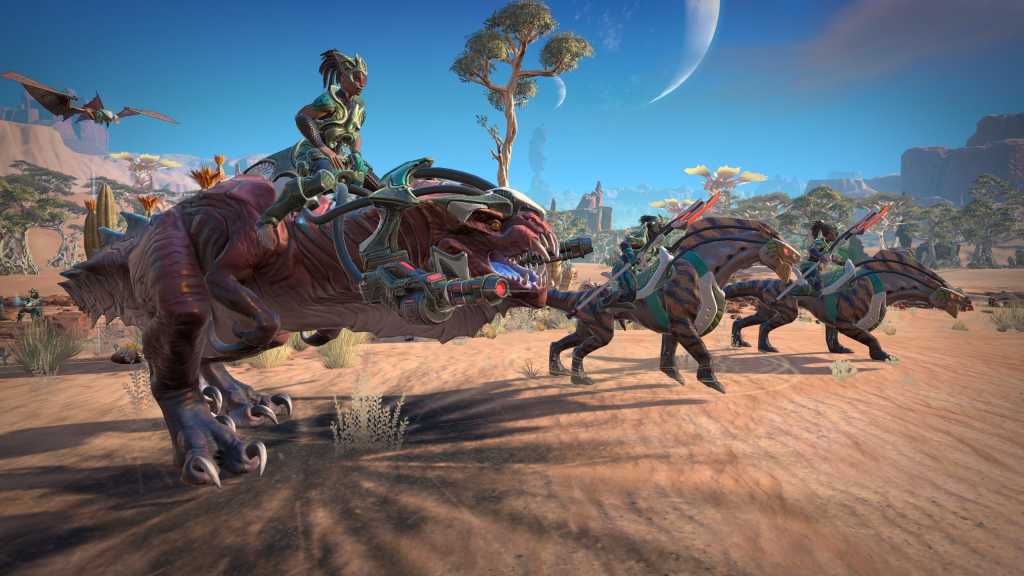 Space dinosaurs. Time travel. Cyborgs. Alien parasites. The decaying ruins of an imperial pleasure palace. Giant bugs. Even larger mushrooms. Mind-controlling jellyfish. Teleportation. And I saw all that in the span of my hour-long demo.

Age of Wonders: Planetfall certainly has capitalized on its jump to a space age setting, with a universe that draws from every corner of science fiction, pulp and cerebral alike. It’s like a sci-fi trope blender. Here, a bit of Alien. There, Starship Troopers. Add some Foundation and The Left Hand of Darkness to taste.

They’re intricate, the Age of Wonders games. Having not touched Age of Wonders III in about five years now, I’d forgotten just how intricate. But damn, there’s a lot going on here.

At its core, this is a 4X series—the ol’ explore, expand, exploit, and exterminate, a.k.a. “It’s a game like Civilization.” You’re building up your nation from scratch, investing in industry and research, keeping your cities happy, forming an army, engaging in diplomacy, and so on. But the 4X genre is so often defined by the ways games differ from Civilization, and Age of Wonders is no different. Here, the main conceit is you fight battles manually, zooming in on the action and managing your units on a tactical (albeit still turn-based) map.

Oh, and the previous Age of Wonders games built out a rich fantasy environment for these wars to take place in. Too rich, maybe—one of my complaints with Age of Wonders III was that it inundated you with lengthy text logs and called it “storytelling.”

In any case, Planetfall’s left behind the fantasy setting for the aforementioned space setting, which personally is more to my tastes. The gist: Long ago a galaxy-spanning empire fell into ruins, humanity lost the means for interstellar travel in the aftermath, new societies developed in isolation, and now those societies are starting to make contact once again, fighting over the planets (and technologies) of the old empire.

Thus we have the Amazons, women who’ve mastered genetic engineering to create an army of dinosaurs. Hell yeah. We also got a glimpse of three more factions during our demo. The Vanguard are standard “We want to reestablish the empire” folks, the Kir’Ko are a “shattered hive mind” of bug-slaves, and the Dvar are basically cyborg space-dwarves.

None of it’s particularly groundbreaking. As I said, these are all bits and pieces with obvious corollaries in science-fiction-at-large. That said, it’s an entertaining setting with outsized characters and ideas you can immediately grasp. I’d say that’s half the battle with strategy games, as evidenced by the breakout success of (relative) newcomers like Amplitude’s Endless Space and Endless Legend.

And like Amplitude’s games, Planetfall is great at delineating its factions. Each focuses on two different types of weapons, and also has a societal “Doctrine” attached to it. While not as bespoke as Total War: Warhammer’s tech trees, these three slots are enough to give Planetfall’s factions some much-needed variety. The Amazons, for instance, focus on Biochemical and Laser weapons—pterodactyls with neck-mounted lasers, bow-wielding hunters who lob acid, and so on. And as you’d expect, their doctrine is similarly nature-focused, with “Verdant Awakening” the first tech you’ll encounter.

Even more intriguing are the so-called Secret Technologies. There are six of them in the game, of which we saw three: Promethean, Xenoplague, and Voidtech. Players pick one at the start of the game, and these add a fourth variable to the tech tree—and to the end-game. Voidtech, for instance, allows you to create soldiers who manipulate space-time. The Xenoplague lets you infect enemies with a parasite that can turn them to your side. And I didn’t touch the Promethean tree, but apparently it lets you burn the entire planet to ashes.

It’s an interesting idea, giving players (and their AI-driven enemies) a secret. Typically strategy games play everything above-the-table. You look at an enemy faction, you know exactly what their capabilities are and how to respond. But in Planetfall, that’s not always true. There’s a covert element to every match, and that opens up all sorts of subversive opportunities.

I also really like Planetfall’s approach to the strategic map. It’s hex-based, as is standard with every 4X game since Civilization V, but Planetfall groups these hexes into larger provinces as well, amorphous blob-shapes with explicit boundaries. They’re named, like “Academic District” and “The Flowing Fields,” labels that indicate their role in the old empire or sometimes just refer to geographical features. Each has its own terrain, as well—mountains, forest, mushrooms, whatever. And many of them have stories to tell.

This is the biggest improvement from Age of Wonders III to Planetfall. I admittedly didn’t get too far into the campaign. With a little over an hour to play, and battles taking place on the slow-paced tactical map, I only got maybe ten (rushed) turns in. Story is now more tightly integrated with the map though, flavor text tied to specific missions or battles, or sometimes locations. I started my game next to the “Inverse Relativity Center,” for instance—an ominous name if I’ve ever heard one.

Provinces also act as a soft limitation on city-building. Territory growth is province-by-province, not hex-by-hex. When your city population goes up you can annex an adjacent province, then build an improvement in that province to “exploit” it for resources. Provinces can only be controlled by one city at a time though, as far as I can tell—meaning ideally, you want to spread your cities out a few tiles so each can maximize the number of provinces under its influence. Or at least, I think that’s the ideal scenario.

Like so much of Planetfall though, the “exploitation” system is somewhat impenetrable at first glance. Interface design and user experience is where Age of Wonders has struggled in the past, and may struggle again this time. It’s dense, in part because there’s more to learn: A strategic layer and a tactical layer, and both can be pretty unforgiving if you don’t pay attention to even the littlest details.

Planetfall makes some progress. Maybe not enough, but some. The pop-up tooltips are less intrusive and verbose than they were in Age of Wonders III, and Planetfall’s ditched the lengthy lore dumps up front—or at least they didn’t show up in our demo.

But there’s still a lot to decipher in those early turns. You can refit your units with different weapons and upgrades, and also equip and level up your faction leader. The tech tree, like any sci-fi game, is impenetrable without laboriously mousing over each and every option to see what it adds. The building menus are a bit awkward and there’s no easy way to tell what you’ve queued up. The tactical maps look great, dotted with old ruins and sci-fi factories, but without a mini-map it’s easy to get flanked because you lost enemy units in the visual clutter. Et cetera.

There are a lot of fiddly bits, in other words. I don’t necessarily want those fiddly bits gone, because they’re what make Age of Wonders unique and interesting. Heaven knows we don’t need just another ultra-polished Civilization reskin. But Planetfall doesn’t do the best job at conveying information to the player up front, or tutorializing (aside from the basics) how it differs from other strategy games. That’s the roadblock that made me bounce off Age of Wonders III a few times, and I’m curious whether Planetfall fares any better.

I do love the setting though, and perhaps that’s enough to carry people over the learning curve. I mean, space dinosaurs. Even if Age of Wonders: Planetfall ships with all its various rough edges intact, maybe space dinosaurs alone is enough to hook players. It certainly got me excited.

Still, we’ve only played the first ten turns and you know what that means—these impressions won’t be worth the digital paper they’re printed on when it comes release time. There’s a lot left to discover about this universe, most of which will take hours and hours of painstaking troop maneuvers to reveal. And for that, you’ll have to wait until the official release on August 6. Be sure to check back in on me and my beloved space dinosaur army then.