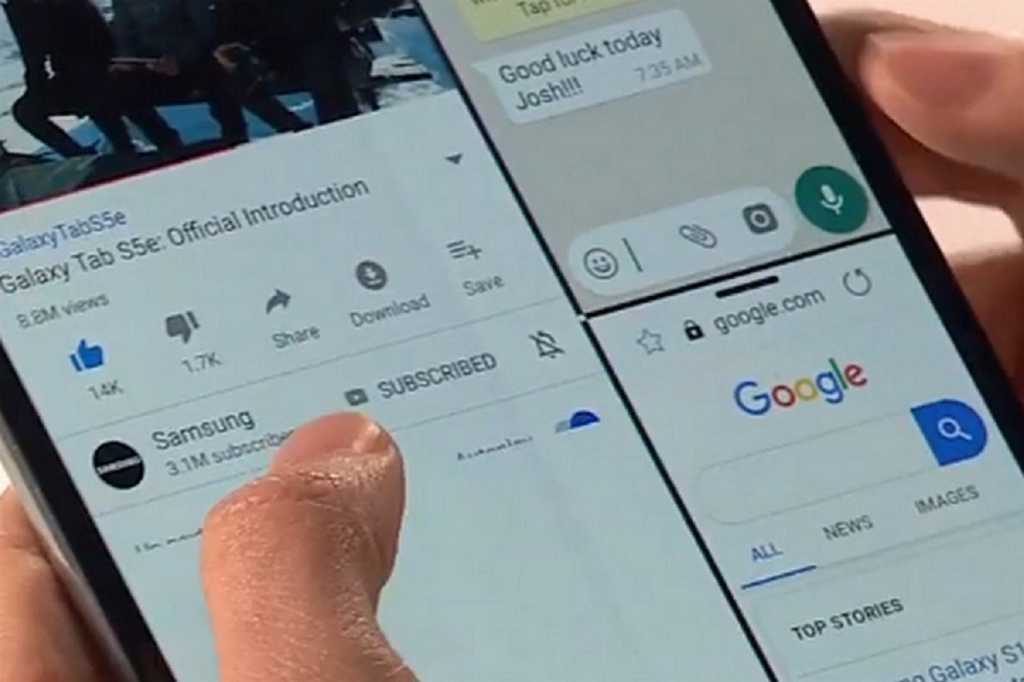 I attended Samsung Unpacked with a singular mission: to go hands-on with Samsung’s Galaxy Fold. With a 4.6-inch display on the front, and a 7.3-inch display tucked inside, it looks to be a revolutionary smartphone—assuming the phone is as elegant in the hand as it was during Samsung’s scripted dog-and-pony show.

But, alas, while Samsung’s demo space was packed silly with Galaxy S10s, the Galaxy Fold wasn’t available. There wasn’t even a Galaxy Fold entombed in a glass display case. So I’m left with only unanswered questions—like whether the $1,980 Fold will have a visible seam running down its unfolded display like the seam I spied during the live Unpacked demo. Check out the seam at the 42:59 mark in Samsung’s official demo video, or just look below.

So what’s causing the seam? Is it simply a transient ghost that quickly goes away, or does it remain onscreen permanently? Does it appear only over white content? Does it only appear at certain angles, or under certain lighting? For what it’s worth, the seam didn’t appear throughout most of the Galaxy Unfold demo—but when it did appear, it was obvious. The journalist sitting next to me noticed it too.

Do I even care? We’ll see. Hands-on time will answer that question. But I can’t help but think we’re on the doorstep of a “seam controversy,” much like the Google Pixel 2 was marred by a burn-in controversy, and the Google Pixel 3 remains blighted by a notch controversy. Mind you, I think the notch complaints are overblown, and while I noticed a slight amount of Pixel 2 burn-in, it never diminished my largely positive opinions of the phone. Time will tell if the Galaxy Fold withers under fanboyjournalistic scrutiny… or really has any seam at all.

Will the Galaxy Fold fit in my pocket?

Samsung has yet to publish official dimensions for the Galaxy Fold, but come on, look at it. When fully closed, it will be about as thick as two premium smartphones sandwiched back to back, and that’s a porky package for modern denim pockets. I can barely bend down when I’ve pocketed the Pixel 3 in my semi-skinny jeans, so how exactly will the Galaxy Fold perform?

Maybe it’s time to bring back phone holsters. Or dad jeans for all. The Fold’s thickness could be a major usability issue, and a deal-breaker for many.

What’s up with the weird floaty front display?

The Galaxy Fold has a tablet-like 7.3-inch display when unfolded, but the 4.6-inch display on the front looks underwhelming. That’s not a generous screen size compared to what we find in even the smallest premium smart phones. For context, the iPhone Xs is 5.8-inch and the new Galaxy S10 is 6.1-inch. The 4.6-inch Fold display actually brings us back to iPhone 7 territory—and that’s too small.

Worse yet, the Galaxy Fold’s 4.6-inch display essentially floats in the middle of a much larger physical chassis. Can we even call these bezels?

The dead space top and bottom, left and right, looks sad. Samsung clearly had to make some compromises on the front display, and I’m interested to know whether:

Just how useful are continuity and multi-window on Galaxy Fold?

Unsheathe your Galaxy Fold at a party, and you’ll have an awesome parlor trick. Everyone wants to see Samsung’s impossibly cool folding phone. But what happens when everyone leaves, the empty beer bottles are staring you in the face, and you’re left holding your strangely shaped, $1,980 phone?

One of the Fold’s most wowing features is continuity, where open apps on the front display magically transfer to, and expand on, the larger interior display. Is the segue always as quick and seamless as what we saw in the Unpacked demo? And how many apps will really be optimized for the behavior? Most importantly, will we actually embrace the use case?

For example, when I run Google Maps, it’s almost always in my car for succinct driving directions. I’m not sure I’ll ever need to expand Maps to a tablet interface as illustrated in the Unpacked demo. Then we have the Unfold’s three-app multi-window. Looks cool, but will I use it? I have two-app multi-window on my Pixel 3 XL and Galaxy Tab S3 tablet, but never use it. I doubt my behavior on the Galaxy Fold would be any different.

Questions aside, the Fold has obvious upsides

Clearly I’m a skeptic, but this doesn’t mean I don’t see clear promise and utility in the Galaxy Fold. I use my phone constantly throughout the day, but then spend a fair amount of time on my tablet at night and on weekends. So I would love for my phone to expand into a tablet for Netflix, as Samsung demoed at Unpacked. And I would love to have a full-screen Chrome experience for when I’m looking up trivia, sports scores and sundry other unimportant things when kicking back on the couch.

A phone and tablet in a single device? Count me in. Now we wait to see if Samsung has actually pulled off this impossible dream—without any deal-breaking flaws, niggling usability issues, or features left unused.