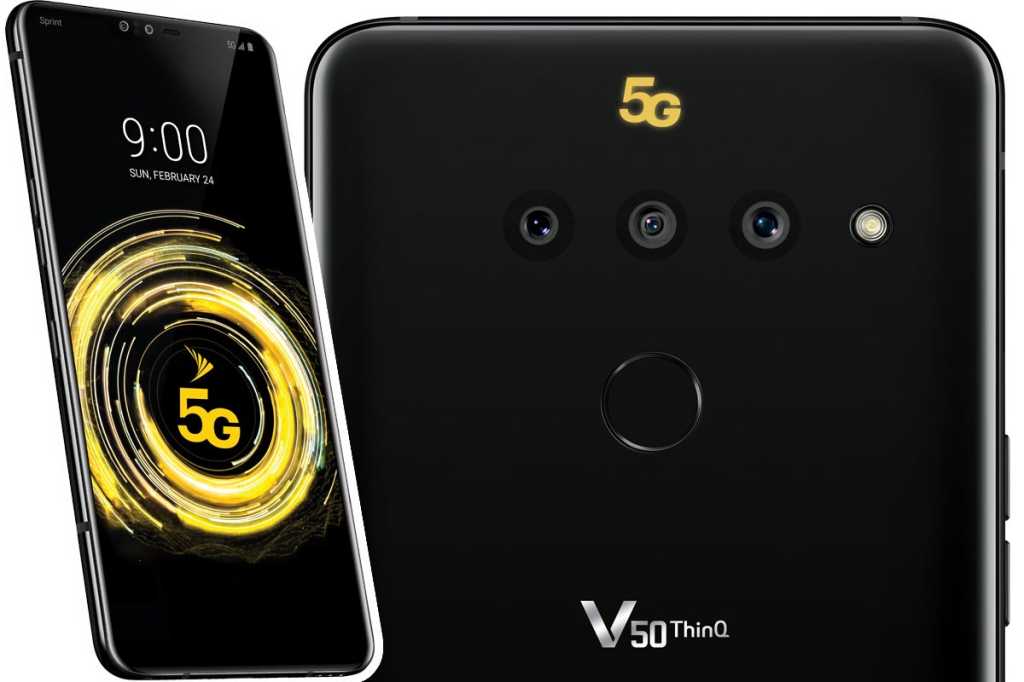 LG has introduced its first 5G phone and, well, in terms of upgrades it’s a far cry from the Samsung S10 5G. Basically, the LG V50 ThinQ is a V40 with a 5G chip in it, and that’s of dubious benefit to consumers because 5G networks won’t materialize in any significant way until 2020.

OK, there are a couple other changes: The V50 has a Snapdragon 855 processor, which is a prerequisite for use of the X50 modem. And at 8.3mm, it’s a little thicker than the V40 to accommodate the modem and handle the vapor-cooling chamber that’s needed to keep the heat down. The V50 also has a larger 4,000mAh battery (versus 3,300mAh on the V40) to offset what LG estimates is a 20 percent hit in battery life when using 5G compared to LTE.

Oh, one more thing: The V50’s camera is entirely under glass now like LG’s G8, which is a nice touch. And of course it’ll be more expensive than the V40. Otherwise, it’s the exact same phone. Check out the specs:

With the G8’s time-of-flight sensor, the V50 could have been a fun phone with AirMotion and Hand ID, and at least give people a reason to buy it other than the dubious promise of 5G. As it stands, LG will market the V50 as an entirely new phone, but really the only thing new about it is the modem.

LG let me play with the V50 for a few minutes, but I wasn’t allowed to take pictures. Nor was I able to test 5G speeds since they weren’t able to set up a micro cell. So what was the point of this demo, you ask? To be among the first smartphone companies to roll out support for 5G. Samsung announced the S10 5G last week and Motorola beat everyone with the Verizon 5G mod for Moto Z last year. So LG had to get on board, lest anyone think LG wasn’t on the cutting edge.

But aside from making 5G headlines, the V50 is kind of pointless. Like the rest of the 5G handsets, it uses Qualcomm’s x50 modem, which has already been overshadowed by its successor, the X55. This newer modem promises faster speeds, combines a 4G LTE modem in a thinner package, and supports T-Mobile’s Frequency Division Duplex (FDD) network.

But modem generations aside, there are no networks to take advantage of 5G. Sprint was the first to announce support for the LG V50, with the promise of “consistent connection and lower latency with virtually buffer-less streaming, which is ideal for videos, music and gaming.” When you’ll be able to get that, I don’t know, but Sprint has assured us that nine cities will be getting 5G in the first half of 2019. If that’s anything like Verizon’s rollout, it won’t be a seamless transition.

So if you plan on buying the V50, proceed with caution. You’re essentially getting an old phone, and more than likely won’t be able to take advantage of its headline feature this year.

And even if you happen to live in one of the first 5G cities, you won’t be getting anything near the promised super-fast all-over speeds that 5G will deliver with the X50 modem. 5G is in the very early stages of its rollout, and it’s going to take years before it’s anywhere near as ubiquitous as 4G.

I don’t blame LG for the V50. 5G is the buzzword of the moment, and phone makers want, nay need, to get on board as soon as possible. Carrier hype has turned 5G from a next-gen evolution into a life-saving proposition, and phone makers have fallen for it, hook, line and sinker. Frankly, this phone should have been named the V40 ThinQ 5G, which would have given customers a proper understanding of what it is.