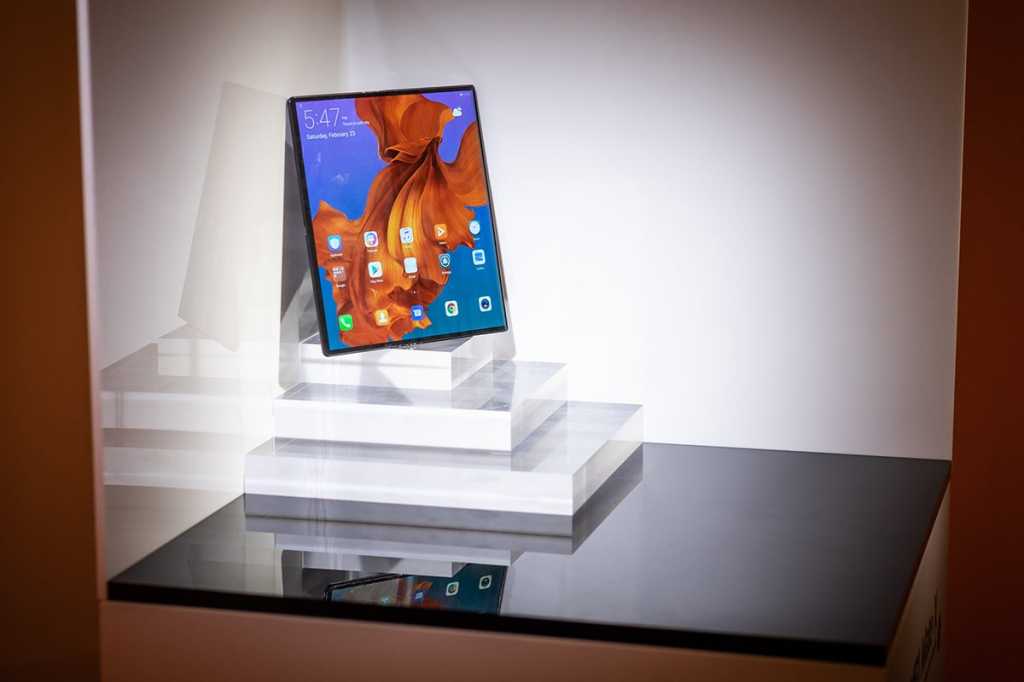 The folding phone war has officially begun. Just days after Samsung showed off its Galaxy Fold, Huawei took the wraps off the Mate X, which it is calling the world’s fastest and thinnest folding phone. It comes in a different shades of blue. And it has 5G.

Huawei’s spin on the folding phone is quite a bit different than Samsung’s. Unlike the Galaxy Fold, the Mate X folds outward, so the outside screen is the same as the inside one. When opened, it measures a full 8 inches with an impressive 2480×2200 resolution, versus 7.3 inches and an unknown number of pixels on the Galaxy Fold.

The main outside screen—which Huawei calls the “daily driver” display—measures 6.6 inches (2480×1148) and has extremely slim, uniform bezels all around, while the secondary rear display is 6.38 inches (2480×892). The ratios of all three screens are a little funky—19.5:9 for the main display, 25:9 for the rear one, and 8:7.1 for the tablet, but that’s to be expected in the early rounds of the folding phone revolution.

The difference in screen size is due to a stationary and quite bulbous bar at the end of the phone that acts as both a handle and a housing for a trio of Leica-branded cameras, an LED flash, a power button (which also doubles as a fingerprint sensor), and a USB-C charging port. That eliminates the need for a notch like on the Galaxy Fold and gives the tablet a very attractive look with slim bezels all around, but it also means you can’t take selfies or video chat on the Mate X when it’s open. In fact, selfies are only possible using the rear display, since that’s where the cameras are.

Since the handset folds outwardly and not like a book, the display has a “falcon wing” hinge that connects the two pieces. It’s similar to the Surface Book’s dynamic fulcrum hinge in that it folds over itself to create a near-gapless seam that measures just 11mm when closed. Samsung hasn’t shared the thickness of its Galaxy Fold, but in pictures it seems to be much thicker than that. When opened, the full Mate X tablet has a thickness of 5.4mm (not counting the bar), slightly thinner than the 5.9mm iPad Pro.

As far as how long the Mate X will last, Huawei says it has a 4,500mAh dual battery system that fills both sides of the phone but didn’t give any usage estimates. Also under the hood is Huawei’s own Kirin 980 chip and Balong 5000 5G modem. The company says the Mate X will deliver speeds of up to 4.6Gbps, quicker than even the theoretical 2.5Gbps peak of the Qualcomm X50 modem in the Galaxy S10 and LG V50 ThinQ.

For those skeptical, it does appear as though the Mate X is an actual product. Huawei wouldn’t let me touch the device, but unlike Samsung, I did get to see it up close. It was all very choreographed—the person holding it opened and closed it a few times, and held it in several flattering poses—but it was plenty convincing.

Granted, the presenter opened and closed it somewhat gingerly and made sure to hold it and show it off at strategic angles, but it seemed sturdy enough when opened. I noticed a visible center seam in the screen at certain angles and there was some slight rippling at the hinge, and it was tough to tell how much heavier it is at the bar end. The hinge presumably locks when in tablet mode to stay flat and enable normal gestures, but Huawei didn’t answer that or any other questions during my briefing.

To that end, what we don’t know about the Mate X can fill its spacious 8-inch screen. Huawei didn’t give us pricing or availability for the phone, and for another, it didn’t offer any clues as to how long battery life would be in typical usage, let alone under the strains of 5G. It does, however, have a crazy-fast 55W Super Charge that will fill 85 percent of the Mate X’s battery in just 30 minutes.

Among the other things Huawei didn’t tell us: RAM, storage, OS version, and weight. Nor did they tell us the specs of the cameras, other than to point out that you can enable the rear screen to show a mirrored viewfinder when snapping a pic so your subject can see how they look.

We also don’t really know how apps work. Huawei said the Mate X would run split-screen apps like a normal Android tablet, while Samsung showed off next-generation triple-app multitasking. But beyond that, Samsung made a point to discuss app continuity in a live demonstration on stage, but Huawei didn’t offer much in the way of operation or navigation of the Mate X. In fact, the closest I got to seeing how the Mate X worked was when the presenter accidentally launched a music app. (It filled the screen at least.)

Given the lack of information, it’s doubtful that the Mate X will officially launch before Samsung’s folding phone, which is slated to go on sale April 26. Even more doubtful is that it will be sold in the U.S., given the government’s active campaign against the company. It will have at least one accessory, however, in the form of a full-cover case that lets you use the front screen when protected but forces you to slide it out of its sheath to open it.

But consider the folding phone war official. Inside vs outside curvature. Single screen vs dual screen. Full screen vs notch. 4G vs 5G. Interstellar Blue vs Astro Blue. Not since Betamax vs VHS has a matchup mattered more to the future of consumer electronics.

And who knows, maybe one day I’ll get to actually touch one and experience it for myself.