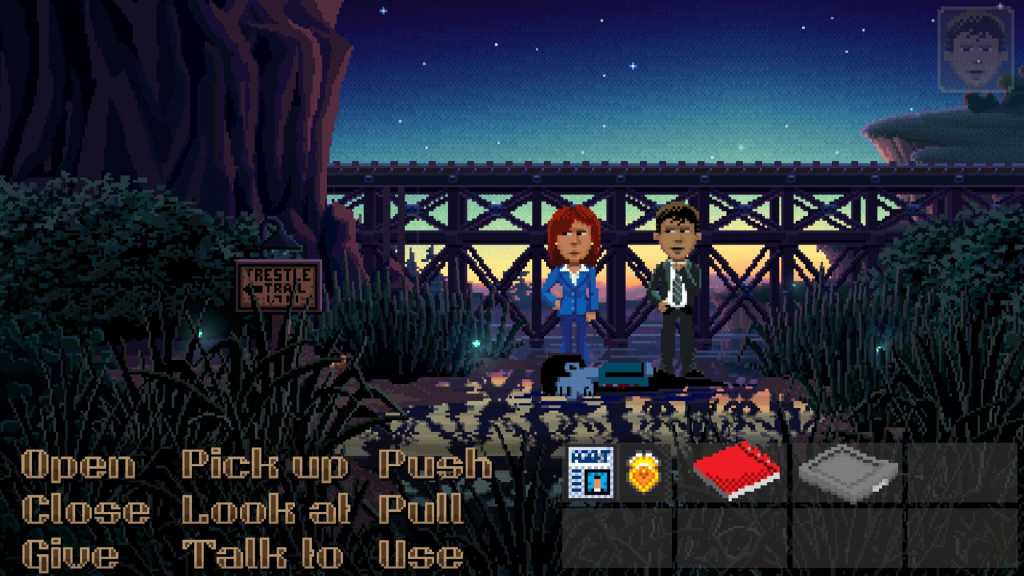 We made it, everyone. The busiest February in recent memory is now essentially over, with Anthem’s “official” release today. Hopefully you found a new game to love. Me? I’ll be abandoning my PC for a few days to play Tetris 99. It’s really, really good, so congrats to Nintendo for locking that down.

But before I go, time to recap the news. This week we have free copies of Thimbleweed Park, major changes coming to The Bard’s Tale IV and Fallout 76, Wadjet Eye publishing its first 3D game, and (unfortunately) more layoffs.

Free for the taking

As always, we start with the freebies. The Epic Games Store giveaways continued this week with Thimbleweed Park, the SCUMM-esque throwback adventure game from Ron Gilbert and Co. We quite liked it when it released back in 2017, so it’s well worth picking up if you don’t already own a copy. Yeah, yeah, I know, you hate the Epic Games Store. Feel free to spend $20 on a Steam copy, in that case. I won’t stop you.

Mech strategy game Battletech is also free this weekend, though that’s on a trial basis only. You can play it for free through Monday. The recent Steam reviews are “Mixed,” though that seems to result from people who download the trial, realize Battletech is a reeeeaaally slow burn, and then lose patience. Fair enough, but I still enjoyed my time with it.

Hunt: Showdown continues to be the multiplayer experience I wish I had more time for, this week unveiling the Immolator—a burning skeleton-monster who manages to look much scarier than the cheesy Ghost Rider ripoff I expected. He’s not live yet (to my knowledge) but should hit the test servers soon.

We joke about THQ Nordic acquiring the entire games industry, but to be honest I’m surprised at the warpath they’ve been on these past few years. Circa 2013 this was a publisher that mainly put out small adventure games. Now THQ owns Deep Silver, owns Timesplitters, owns Kingdoms of Amalur, ownss Alone in the Dark, own Carmaggedon, owns Warhorse Studios—not to mention all the THQ stuff.

You can expect the buying spree to continue. This week GamesIndustry.biz reported that THQ Nordic raised an additional $225 million for “further acquisitions.” Keep an eye out.

The Division 2 already gave beta testers a glimpse of its endgame content, but now there’s a trailer for the rest of you. Within, you’ll find a glimpse of the decaying Capitol Building, as well as the heavily armored Black Tusk mercenaries who populate the game’s toughest challenges. Personally I found them a bit too bullet-spongy in our recent demo, but it does make them a fierce foe. And for those who haven’t had a chance to try The Division 2, there’s an open beta running next weekend, from March 1 to 4.

I started reviewing The Bard’s Tale IV last year and then, uh, never finished it. I guess that’s review enough, right? I liked it in theory, but abysmal performance, lengthy load times, and bugs eventually drove me away. The good-ish news: InXile is working on a “Director’s Cut,” due to release in June, incorporating an engine upgrade, improved level art, a new dungeon, new enemies, new items, inventory filtering, and more. InXile chalks it up to the recent Microsoft acquisition, implying they’re in a better position to deliver these improvements now—which is great, except that it would’ve been nice for some of these aspects to be in the game as it released last fall.

Ah well, hopefully save progress will carry over so I can finally go back and finish it.

Then there’s the other throwback RPG from 2018, Underworld Ascendant, which was so rough I didn’t get far enough in to put together impressions. It’s also received a stream of updates since release, with another major overhaul pushed this week. Via the Steam update:

“The world is now a series of interconnected levels, accessible through The Grand Staircase. Updated quest flow now focuses on important narrative quests that highlight both new and refined story and content, while allowing the player to freely explore the environment and optional side-quests.”

Pretty sizable changes, though I’m not sure it’ll be enough to save it.

Wadjet Eye is pretty much synonymous with Adventure Game Studio. What started as Dave Gilbert making AGS projects (Blackwell) then turned into Wadjet Eye publishing pretty much every major AGS release in the past decade or so, including one called Technobabylon.

But surprise! Technobabylon’s getting a sequel, titled Technobabylon: Birthright, and it’s in 3D. Dave Gilbert tweeted some screenshots this week, and I’m getting Dreamfall vibes I think.

Total War: Three Kingdoms was delayed last week, pushed back from early March to May 23. The marketing effort continues apace though, and this week Creative Assembly showed off “Records Mode,” the more traditional (read: realistic) Total War experience. This mostly means fragile generals, as opposed to the superhuman warriors you control in the more idealized “Romance Mode.” You can check out 20-plus minutes of footage below.

Fallout 76 had a rough launch, but to its credit Bethesda’s not abandoning the game yet. This week the developers released a roadmap that stretches all the way through the end of 2019, detailing what’s to come. Updates include the less restrictive “Survival Mode,” a “Shear Terror” questline involving cryptids, a sparsely detailed mode called “Nuclear Winter,” new Vaults, and a story update due to arrive next fall. I guess I’ll be checking back next November to see how the game’s improved. Hopefully the answer is “Substantially.”

I continue to be excited by the idea of BioShock-alikes, even though most of them haven’t panned out. Thus you can trust I’m intrigued by Close to the Sun, wherein Nikola Tesla invites all the world’s scientists to live on a big boat, apparently, and do science, except of course it all goes horribly wrong and you’re trapped onboard. Yeah, that’s my kind of setup. 2019’s shaping up to be quite a year for boat-based horror as well, with this, Layers of Fear 2, and Man of Medan.

We’ll end the same way we’ve ended too many weeks in recent memory: with layoffs. Lots of them. This week it’s both Guild Wars developer ArenaNet and EA’s Australian studio FireMonkeys. Kotaku had the scoop on both, reporting that ArenaNet is “planning big layoffs,” while FireMonkey laid off approximately 50 people. A source at the latter said people are operating under the assumption the studio will be shuttered entirely in the near future.

Best of luck (again) to everyone involved. It feels like we’re having these conversations too often lately, but you know.