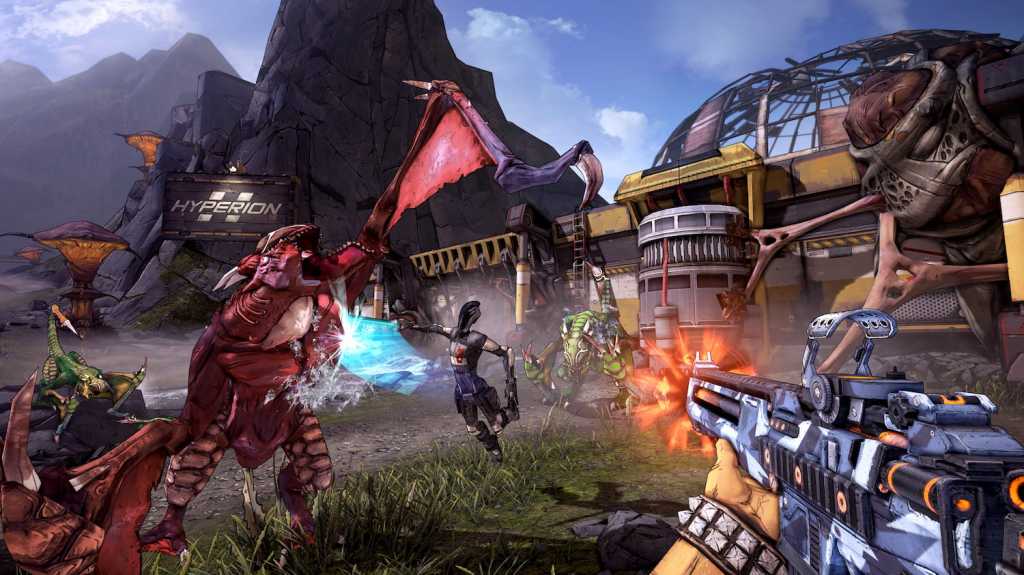 Time marches on. Get it? Okay, that’s about the best I can do for an intro this week. Luckily the news speaks for itself, as Funcom signs a deal for three new Dune games, Capcom brings Phoenix Wright to PC, Cyberpunk and Borderlands and Respawn all tease future game footage, Noclip.website makes it easy to explore old video game maps, and Johnny Cage gets blood on his Oscar.

This is gaming news for February 25 to March 1.

Per usual, there are plenty of free games to go around this weekend. First up, Space Engineers…finally emerged from Early Access? Am I reading this right? I first played Space Engineers in 2013 and would’ve sworn it was finished years ago, but apparently it just got the 1.0 treatment this week—and to celebrate, it’s currently free-to-try. It’s very good, assuming you didn’t play it sometime in the last six years.

Your other options are demos. Hitman 2‘s “Starter Pack” is a free demo that lets you play the first mission in the game, the fairly small tutorial level Hawke’s Bay. It’s a great place to start with one of our favorite games of 2018. And then there’s Mutant Year Zero, also a 2018 favorite, which now has a demo that could (if you explore and take it slowly) last you upwards of an hour or so, covering the beginning of the game. If you love tactics games, I highly recommend checking it out.

Johnny Cage is back! Of all the Mortal Kombat XI reveals so far, this one’s my favorite. Cage and his dumb Hollywood one-liners are in full form here, as he bludgeons opponents with pseudo-Oscars, plays with an action figure of himself, and does multiple takes punching Kabal’s head off. Best fatality so far? Yeah, best fatality so far.

Capcom’s done a great job of catering to the PC lately by bringing over games that skipped the platform once upon a time—Okami, Dragon’s Dogma, et cetera. Now another conspicuously absent series is making its way over, as Capcom plans to release the Phoenix Wright: Ace Attorney Trilogy in April. I’m pretty excited to play lawyer-detective.

Speaking of non-traditional detectives, Frogwares’ The Sinking City is due out soon, and it’s looking a lot like the company’s Sherlock Holmes games with cosmic horror elements—a.k.a. a lot like the official Call of Cthulhu game Frogwares was making once upon a time before Cyanide took over.

A lot of the finer details sound intriguing though. “We put the detective experience first. This means zero hand-holding. There are no straightforward tasks, and no objectives on the map to follow. We will never tell you how to approach a quest, where you should go, what you should look for, who you should accuse.” That sounds extremely up my alley, and I hope Frogwares can pull it off.

April the 13th be with you

Respawn “announced” Star Wars Jedi: Fallen Order at E3 last year, insofar as Vince Zampella said “Yeah we’re making a Star Wars game and here’s the title.” We haven’t actually seen it though, despite the fact it’s supposed to release this fall, so it’s a relief to hear Fallen Order will show up at this year’s Star Wars Celebration on April 13. Maybe we’ll even see a trailer. That’d be nice.

Another “Yes, we’ll be at an event” announcement this week, CD Projekt Red confirmed in a tweet that we’ll see more Cyberpunk 2077 at E3 2019. Hopefully it can impress us as much as last year’s demo did. (And hey, what the hell, might as well embed footage of that demo below.)

Borderlands, is that you?

It’s been seven years since Borderlands 2, five years since the Pre-Sequel, and three years since Gearbox confirmed it was working on Borderlands 3…so where is it? Nobody knows—but we might hear more at PAX East. As spotted by PC Gamer, Gearbox is hosting a panel at PAX East promising “never-before-seen reveals, exclusives, and surprises.” And given 2K has a history of announcing games at PAX East panels, it seems safe to assume it’s Borderlands. I mean, it has to be, right?

The spice must flow

Dune used to be a mainstay in video games, with 1992’s Dune II even considered the first modern real-time strategy game. It’s been almost two decades since we’ve had a Dune game though, so I’m pretty excited to hear Funcom’s penned a deal for the rights, guaranteeing a minimum of three Dune games in the next six years, at least one of which will be an “open world multiplayer” game, a.k.a. an MMO. Given that Funcom and Petroglyph partnered on a Conan RTS last year, it seems safe to assume a Dune RTS could follow as well.

Lest we forget: Fortnite used to be a very different game. Before it became the biggest battle royale game in the world, it was a horde mode where you built and defended your own forts. Then Epic “borrowed” some ideas from PlayerUnknown’s Battlegrounds, the original horde mode got shunted off to the sides, and the rest is history.

It was a pretty brazen move, cloning PUBG, and it looks like Epic’s back at it again. EA’s Apex Legends released beginning of February and was lauded for two new features: A pinging system that lets you wordlessly call out weapons and enemies to your fellow players, and a respawn system that lets teams come back from near-death. Fortnite ‘s Season 8 update added a pinging system of its own this week, and enterprising data miners have already found evidence of a respawn system potentially in the works. That was fast.

If you’ve ever been interested in how video game maps are constructed, Noclip.website is bound to consume hours of your life. Someone who goes by Jasper has dumped a bunch of game maps from Dark Souls, Psychonauts, various Zeldas and Marios, Banjo-Kazooie, Tony Hawk, and more, and made them all freely explorable in a browser window with WASD and your mouse. There are no enemies and no collision, so you can fly around and get a good look at the actual level geometry, and poke around for secrets. I hope Nintendo doesn’t shut it down, but you’d better check it out soon just in case.

I’m finding it hard to keep up with Destiny 2 news these days without the big tentpole expansions to draw me back in, but apparently the “Season of the Drifter” is about to start, bringing with it a new co-op mode called “Reckoning,” an expanded Gambit Mode as well, plus the requisite new guns, new maps, and so on.

Starbreeze’s troubles continue. Its game Overkill’s The Walking Dead was panned at release last year, and now Skybound has stepped in to officially terminate its licensing agreement—thus removing the game from sale, and prematurely ending any post-release content plans. In a statement, Skybound said “We did our best to work with Starbreeze and resolve many issues that we saw with the game, but ultimately Overkill’s The Walking Dead did not meet our standards nor is it the quality that we were promised.”

Why the game was allowed to be sold at all, who knows? But in any case, it’s gone now, another blow to Starbreeze in a year that’s also included insider trading allegations and a CEO who by all accounts has disappeared off the face of the earth.