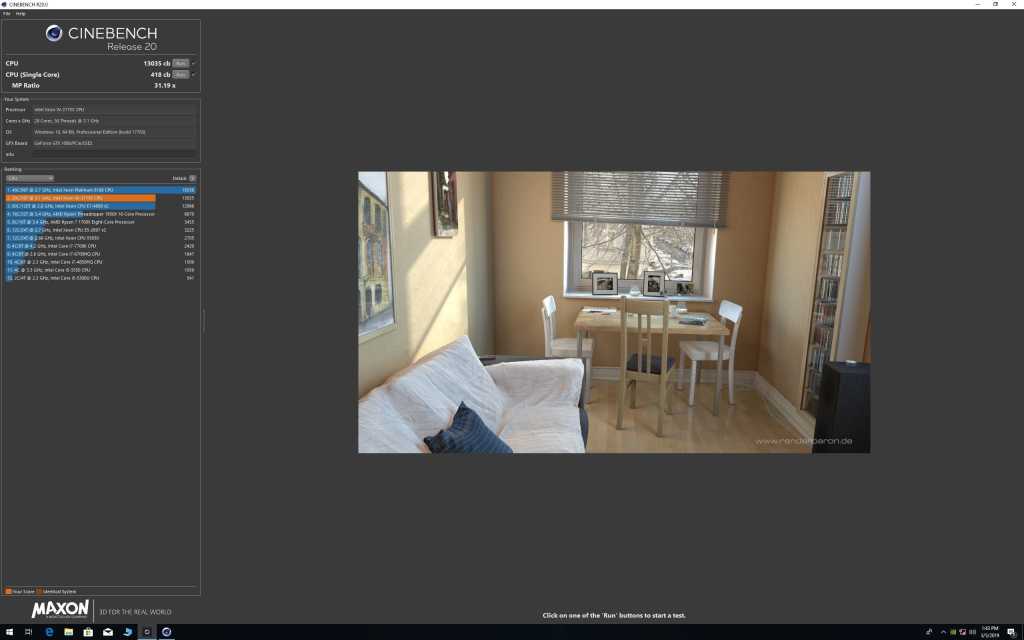 Maxon’s popular Cinebench CPU benchmarking program just got a long-overdue update to bring it up to parity with modern PCs. We’ve already tried it, on two of the most powerful CPUs you can buy today, and have results to share, along with some historical context and tips for using it with your own CPU.

The free Cinebench R20 app is intended to replace Cinebench R15, which first saw service in 2013. To give you an idea of how far we’ve come in hardware, the top-end desktop CPU in 2013 was a quad-core, 4th-gen Haswell Core i7, while an enthusiast-level chip was a six-core 3rd-gen Ivy Bridge-E Core i7.

Today, Intel’s top-cat consumer CPU is the Core i9-9980XE (available on Amazon) with 18 cores. And although not really intended for consumers without the bank account of Bill Gates, the company also just pushed a 28-core Xeon W-3175X.

AMD, meanwhile, is making 8-core CPUs rain and offers a 32-core Threadripper 2990WX for high-end consumers at a crazy-reasonable price.

To keep Cinebench R20 more relevant, the company has increased the workload complexity, increased memory use, and adopted the latest rendering engine from the product it’s based on: Cinema 4D R20. The engine itself features support for Intel’s Embree raytracing technology, which has also been adopted by Valve, AutoDesk, UbiSoft, V-ray, Blender, and Corona, among others. Under the hood, the R20 engine supports AVX, AVX2, and AVX512 instruction sets. Because we can never have enough, the benchmark now supports up to 256 render threads.

Maxon’s Cinebench refresh arrives with some historical baggage. At one point, previous versions of Cinebench had been tainted by accusations that it hobbled AMD performance by using the Intel compiler, which favored Intel’s CPUs over AMD’s. Maxon, however, denied this and told PCWorld in 2017 that despite what the FTC maintained, it didn’t use the infamous “CPU ID” options that favored Intel chips.

It’s all water under the bridge now, as AMD itself used Cinebench R15 to demonstrate just how fast its Ryzen CPUs were. Maxon claims all is peace and harmony. “Maxon also works very closely with Intel and AMD to test Cinebench on not only the most recent CPUs but the next generation as well. This allows Maxon and Cinema 4D to stay on the cutting edge and deliver the performance required to satisfy the top production companies,” Maxon officials told us.

Windows Store only (no more)

Maxon originally offered PC users Cinebench R20 on the Windows store only which raised hackles across the Internet. The company went so far as to force third-party sites from hosting stand alone versions they had extracted.

Company officials even told PCWorld: “It’s doubtful Maxon will be releasing a standalone Win32 installer version at this time. Cineware is a derivative of Maxon’s flagship product Cinema 4D, used to create ‘high-end’ 3D animation,” Maxon officials told PCWorld. “Cineware is meant to test the hardware and OS artists will actually be using in production. Creatives are constantly pushing the boundaries of hardware and OS performance. Therefore, Cinebench too must push those boundaries in order to provide accurate comparisons.”

Apparently you can push boundaries too far, as the company will offer Cinebench R20 on the Windows Store, Apple Store (for MacOS users), and as a standalone available here.  Still, props should go to Maxon for making it available rather than digging in.

Make no mistake, Cinebench R20 is a big change–a tougher test for today’s faster CPUs. To see how big a difference it makes, we fired up a 28-core Xeon W-3175X and a 32-core Threadripper 2990WX to test on both Cinebench R15 and Cinebench R20.

That’s just the default test, using all of the CPU cores available. We also ran the test’s optional single-threaded test. Cinebench R20 surprisingly puts the Threadripper 2990WX slightly ahead by about 2 percent—which again—is well within the margin of error, and what we’d consider a tie. Still, that’s a decent swing from Cinebench R15, which put the Xeon W-3175X ahead by just under 10 percent.

We’re actually surprised by the score here, as we thought the higher clock speeds of the Xeon W-3175X would easily put it ahead. It’s possible the Xeon’s performance actually loses some ground in single-threaded tests when AVX, AVX2 or AVX512 is used, as Intel allows the CPU to shift down for the more difficult AVX workloads.

Update: After running our original story, Intel officials contacted us about our oddly low single-threaded scores from the Xeon W-3175X as the company’s own scores for the CPU were higher.

We went ahead and reset our system’s UEFI and let the thermal paste set longer (we had removed the cold plate for photography at the end of our review of the chip). Our results after the reset actually made more sense, as the score went from 418 to 444. That’s only about a 6 percent swing from the old score to the new score, but enough to put the Xeon W-3175X where we originally expected it: slightly faster than the Ryzen Threadripper 2990WX.

Maxon said the test increases the computational workload eight fold. In casual observation, we noted about 5GB of RAM being used during runs on both machines. Power consumption didn’t seem to change much: Both systems hit similar peaks between Cinebench R15 and Cinebench R20.

Total time to run on the 28-core Xeon W-3175X was about 29 seconds, while the 32-core Threadripper 2990WX took about 32 seconds. For comparison, Cinebench R15 runs on the Xeon and Threadripper took about 9 seconds, respectively.

One last thing we should note is how the new version jettisons OpenGL performance testing. That’s a small loss, as OpenGL on consumer-level graphics cards in Windows has always been lackluster. For those who want to measure OpenGL GPU performance, other tests will do a better job.

How to run Cinebench R20

If you’re ready to dip your toes into the testing waters, Cinebench R20 is a great start. To install it, simply go to the Windows Store and search for “Cinebench,” and install it.

Once installed, you should reboot your machine, and disconnect it from the network to prevent it from updating in the background. It’s also recommended that you disable or pause virus testing, and shut down other applications to prevent them from influencing the score.

When ready, fire up Cinebench from the Start menu and push the Run button. You should run the test at least three times and average all three if you’re looking for more reliable results. If you’re looking for pure performance runs, give the machine a minute or two between runs (consider even longer rest periods on a laptop.)

To stress-test your system, go into File > Preferences and set a Minimum Test Duration. Set, say, 3,600 seconds, and Cinebench R20 will loop the workload on the given amount of threads for an hour.

When talking about the results you get from a 3D rendering test, you should put it in the proper perspective. Cinebench R20 is a test to measure how a computer (Windows 10 or MacOS) renders 3D using the latest CPU instruction sets. It’s not a GPU test. It’s not an SSD test. It’s almost purely a CPU test that tells you how a PC will perform rendering 3D models.

That doesn’t necessarily tell you how a PC will operate in Microsoft Office or Google Chrome or even Photoshop, because very few consumer-level applications will actually scale to the number of cores available today.

Still, as a tool to measure approximate levels of performance under multi-threaded loads (and single-threaded loads) it’s a repeatable, reliable test and a welcome update from Cinebench R15.