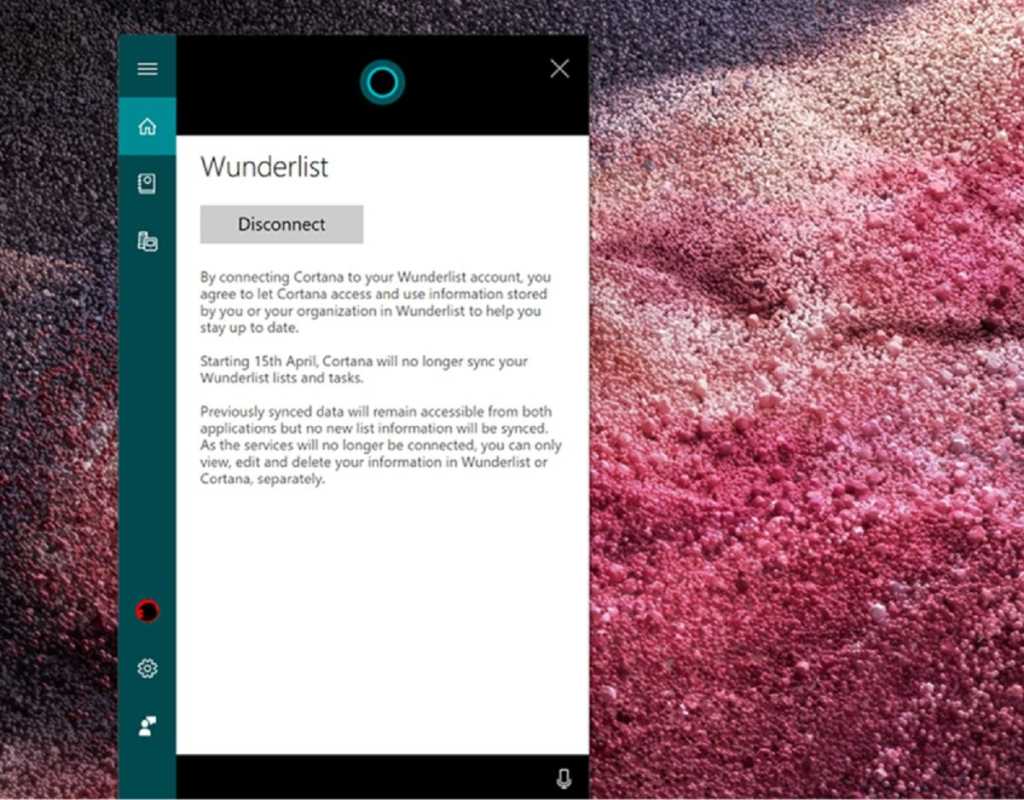 The slow death of Wunderlist continues. Beginning April 15, Microsoft will disconnect Cortana and Wunderlist, so that you won’t be able to issue oral reminders via Cortana any more.

It’s a consequence of Microsoft’s move away from the Wunderlist app, and toward its own Microsoft To-Do.  As of January, Cortana integrates with Microsoft To-Do, though you’ll need to be running a Windows Insider version of the Windows 10 April 2019 Update and follow some convoluted setup instructions to enable it.

In the meantime, though, Microsoft is obliquely notifying customers that Wunderlist is being de-prioritized. That’s because you’ll have to click on the Cortana/search field, navigate to the Notebook, then to Connected Services, and finally to the Wunderlist button. Clicking that produces the following message:

“Starting 15th April, Cortana will no longer sync your Wunderlist lists and tasks,” the message reads. “Previously synced data will remain accessible from both applications but no new list information will be synced. As the services will no longer be connected, you can only view, edit, and delete your information in Wunderlist or Cortana, separately.”

Microsoft reportedly spent between $100 million and $200 million to acquire 6Wunderkinder GmbH in 2015, then left it alone until 2017, when Microsoft launched a pale shadow of the app called To-Do. Microsoft then announced it would retire Wunderlist, but gave no timetable for doing so—leaving Microsoft with two note-taking apps, one with far fewer capabilities than the other. Microsoft’s said since then that it still plans to retire Wunderlist, though for now the service lives on.

“We’re not currently working on new features for Wunderlist as we’re concentrating on our new app, Microsoft To-Do,” a Microsoft spokeswoman said in a statement. “Once we are confident that we have incorporated the best of Wunderlist into Microsoft To-Do, we will retire Wunderlist.”

What this means for you: To its credit, Microsoft has addressed several of the shortcomings my colleague Jared Newman addressed in his 2017 critique of To-Do’s shortcomings. To-Do now ties into the Windows 10 Mail and Calendar apps, you can share lists (via an emailed link), and there are some other integrations here and there. It still feels awfully bare-bones, however. Meanwhile, since Microsoft pulled out of mobile phones, native Android and iOS apps have commanded the spotlight. For my money, neither Wunderlist nor To-Do can challenge the basic effectiveness of Google Keep at the moment.