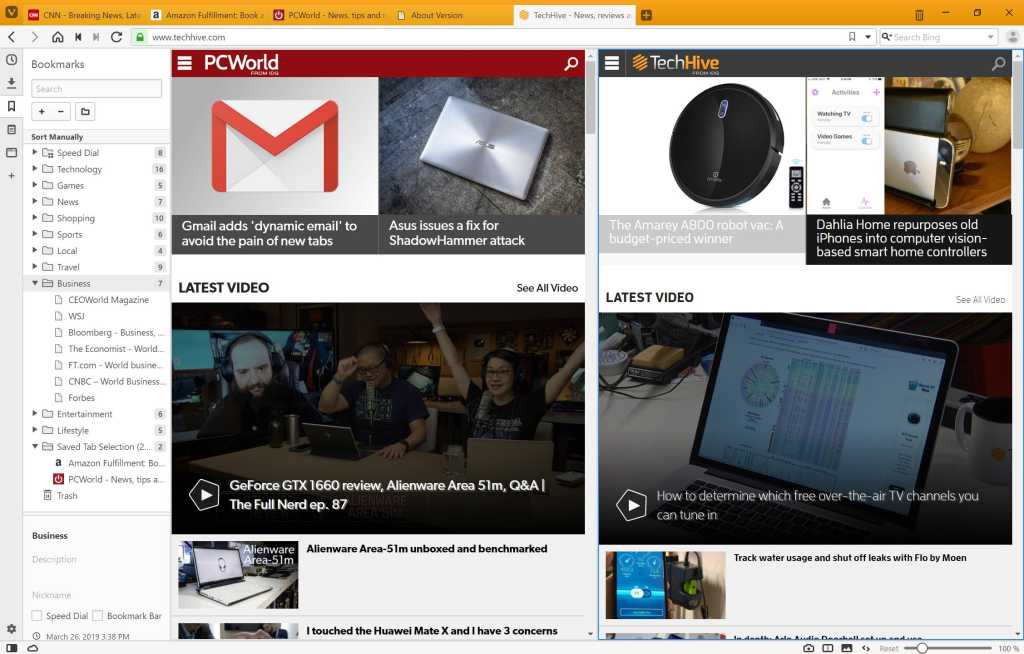 Vivaldi’s latest iteration of its eponymous web browser has added even more drag-and-drop flexibility, allowing you to rearrange tabs and icons (mostly) to your heart’s content.

The Chromium-based Vivaldi officially released version 2.4 of the browser on Wednesday, emphasizing the way in which users can adjust the visual and navigation elements. Vivaldi issued its first major release in 2016, when we praised it for its configurability.

Since then, Vivaldi has gained a reputation for being friendly to power users that like to tweak things, though its market share remains tiny: just 0.11 percent, according to NetMarketShare. By comparison, Firefox has 9.72 percent as of February 2019, while Opera has 1.57 percent.

You can do even more with tabs in the new release: highlight one or several, save them for another session, bookmark them, create a new tab stack, or more. You can even create another “user,” with an entirely separate set of bookmarks, gestures and the works, if you want to keep your work and social life distinct.

To be fair, you can select tabs in Chrome in much the same way as in the Vivaldi browser, by individually selecting one or more using the CTRL key, or a range using the SHIFT command. In Chrome, though, your options are somewhat limited: closing them or bookmarking them are about your only options.

In Vivaldi, your choices go on and on, as seen here:

The new iteration of the Vivaldi browser also boasts a second new feature, though you may find this one less useful. You can now rearrange icons on the same taskbar as they’re already on. If you’d like the home icon to live all the way to the left, you can. Or you can remove it from the toolbar entirely. You can also restore things to the way they were.

The new browser also adds a calculator function to its built-in Quick Commands (accessed by the F2 key). Those provide quick, task-oriented shortcuts to dozens of functions, such as pinning or unpinning tabs, going back and forth in the history, and so on.

What this means for you: If there’s any implicit weakness in Vivaldi’s browser, it’s that some of the more interesting features are buried behind absolutely tiny icons scattered around the periphery of the browser, which can make them difficult to find.  Still, it’s worth checking out. Most browsers offer one-click importing features that easily bring over your saved list of favorites/bookmarks, passwords and more. Needless to say, Vivaldi is free, which means that your investment really is the time you take to explore it. Granted, Vivaldi doesn’t have quite all the features that Chrome has, though Chrome doesn’t offer all the configurability that Vivaldi does. Give it a try!