Razer finally adds media keys to its flagship BlackWidow keyboard line, bringing it up to par with the competition and making it an easier device to recommend, though it’s not without faults.

At some point we gave up reviewing every BlackWidow keyboard to come along. It’s not that the BlackWidow was bad or anything, but Razer was content with the design and…well, there’s only so many times you can review what’s basically the exact same device. I don’t know how phone reviewers do it, honestly, and I say that as someone who’s paid to find minute distinctions among different PC peripherals. Even by my standards, Razer was resting on its laurels.

Take this line I wrote in 2017, for instance: “Not much has changed about the Razer BlackWidow Chroma’s design. This is essentially the same keyboard I reviewed nearly three years ago.” Yes, I was referring to a model I had reviewed in 2014—now five years ago. In all that time, practically nothing changed.

And then, everything changed at once, which is why we’re here now. Razer finally, with the BlackWidow Elite, redesigned its flagship in significant ways—or at least in one very significant way: media keys.

I’m a sucker for media keys.

Okay, if I’m completely honest, not that much has changed besides the addition of media keys. Great, we’re a handful of paragraphs in and this is already feeling like a retread of that 2017 review. But Razer is consistent. It creates a design, and sticks with it.

Sometimes that works out. After all, Razer’s DeathAdder is still one of the top-selling mice on the planet, a decade after its arrival. Other times, it’s a detriment, as when literally everyone knew that Razer’s Kraken headset needed an aesthetics refresh and it still took the company two or three years to bring one to market.

And then there’s the BlackWidow, which is somewhere in the middle. Again, it’s not a bad keyboard. It’s just an expensive keyboard, and that expense has been harder to justify as the market expanded. Razer was one of the first to go RGB, and that saved it for a while, but it’s been woefully late to other trends.

The wrist rest, for instance. Razer just added one of those to the BlackWidow in 2017, long after the likes of Corsair. When Razer finally did it, it was great. The BlackWidow’s plush leatherette wrist rest is so comfortable I’ve even used it at times when reviewing other keyboards. Hell, it’s so good I even paused writing this to see if you can buy one on its own. You can’t buy the exact model that comes with the BlackWidow Elite, but you can buy something similar (for just $19.99 or $26.77, depending on size)—and maybe you should.

Razer was behind the curve though, especially given the BlackWidow’s $170 premium price tag. And there’s been one other pain point that’s bothered me for years, and which I’ve brought up in review after review of the BlackWidow: the aforementioned media keys, or lack thereof.

In the $170 gaming keyboard space, Razer’s only real competitors are Logitech and Corsair, and both have excellent media-key solutions. Corsair mostly sticks with the volume roller and four discrete buttons below that, while Logitech has tried rollers on some models and rockers on others, with slightly different media-key arrangements each time. 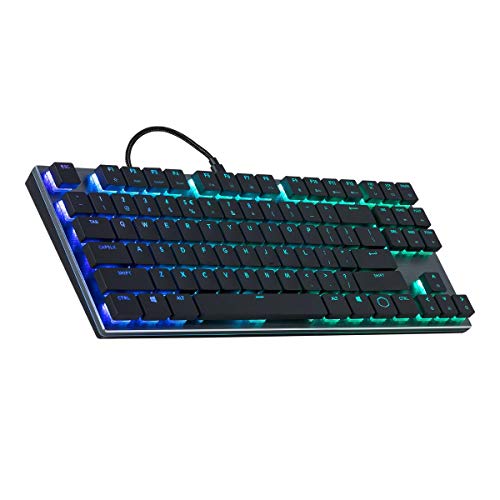 Razer? Razer’s stuck with volume and media playback controls double-mapped to the Function keys, for years. It’s not the end of the world, nor is it unique to Razer. The Cooler Master SK630 we looked at this month uses the Function button as well, for instance.

But the SK630 also doesn’t cost $170, and therein lies the problem. Like the wrist rest, media keys aren’t necessarily a problematic omission unless you’re selling an ultra-premium product, and the BlackWidow has traditionally been pushed as Razer’s flagship keyboard.

All that to say: Razer’s finally added media keys to the BlackWidow Elite. They’re the same circular media keys included on the Huntsman Elite, and I can’t say I love the design. It’s eye-catching but not entirely intuitive, especially the volume wheel—as I noted my Huntsman Elite review from last August:

“It’s not a very ergonomic design, and I’ve found it particularly hard to operate when I can’t take my eyes off the screen. Trying to reach over the keyboard and grab it is a nonstarter. The only reliable way to use the wheel is to run your hand up the right edge of the Huntsman until you find it, then rotate.”

The same holds true of the BlackWidow Elite, where I found myself using the same hand-up-the-side maneuver. It’s not perfect. But you know what? It’s a huge improvement over holding down the Function key, then scanning to try and find the Volume Up/Down indicators, and then stretching your hand across to reach one or the other. I’ll take a dedicated volume wheel over that charade, any day of the week.

Anyway, the rest of the BlackWidow Elite is standard Razer fare. It’s a black rectangular slab with angled edges, beautiful RGB lighting, and that aforementioned wrist rest. Razer’s kept the elements that worked and fixed (to an extent) what didn’t, which is basically all I could ask for.

Razer’s switches are also some of the better Cherry knockoffs in the business, in my opinion. Our model came with Razer’s MX Greens, which are a loud Cherry MX Blue facsimile, meaning they have the “tactile click” at the actuation point. My favorite Razer switch for gaming is the ultra-lightweight Yellows introduced in 2017 (or last year’s purple Opto-Mechanical switches), and I’d rather have an actual MX Blue than Razer’s Greens, but they get the job done.

Really it’s all about those media keys. In our 2017 BlackWidow review, I wrote, “It does feel somewhat like Razer’s falling behind the competition, or rather that the competition’s caught up,” and noted that media keys would be a good place for the next flagship to focus. It took a little bit more time, but Razer finally delivered and the BlackWidow Elite feels like it’s earned the name—and, more importantly, the price tag.

Sure, there are perfectly competent keyboards with similar features for less money, like the Fnatic Streak RGB. But at least Razer’s reached feature parity with other leading flagships from Corsair and Logitech. The market’s crowded as ever, but the BlackWidow Elite’s one of the few keyboards that can boast every feature you might want, and that’s always a good place to be.