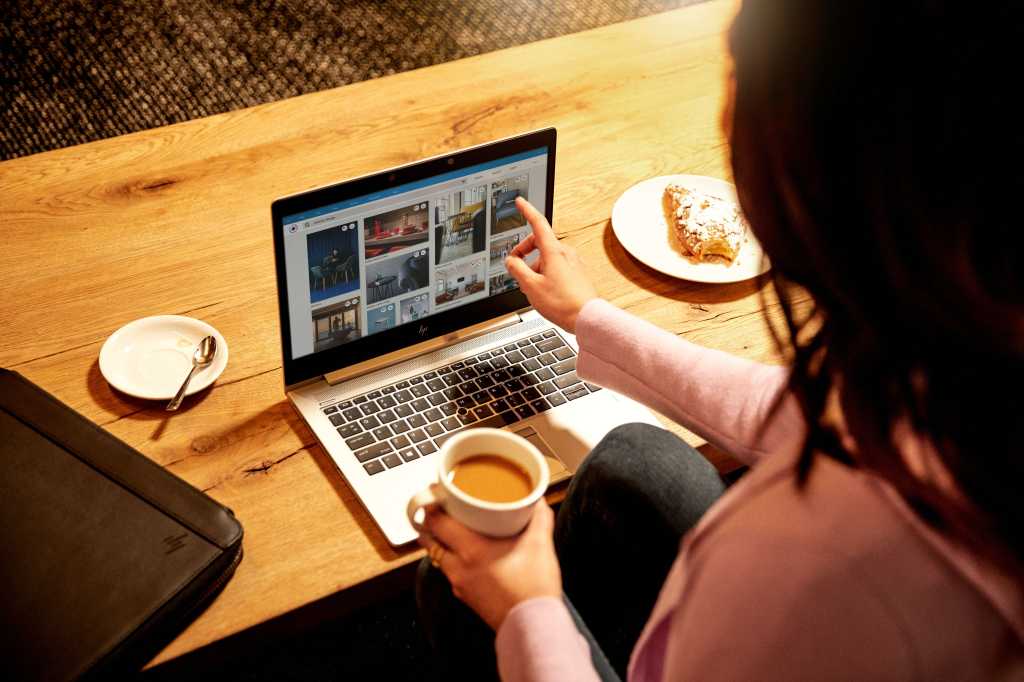 HP’s new models—the EliteBook 830 G6, HP EliteBook 840 G6, and HP EliteBook 850 G6, plus the HP EliteBook x360 830 G6—offer up to 18 hours of battery life, a behind-the-glass privacy shutter, and options for a 1,000-nit screen that can be used outdoors. HP said it will ship most of the models in May, while the x360 model is expected to ship in June. Prices have not been announced.

According to specifications provided to PCWorld, all four notebooks will share common Core i5-8265U and Core i7-8565 Whiskey Lake processors from Intel, while the Elitebook 830 G6 and EliteBook x360 830 G6 will offer a Core i3-8145U option as well. Wi-Fi 6 and Bluetooth 5.0 also appear for the first time in this generation, HP said.

New for 2019: The Sure Sense security agent

As many business notebooks do, HP has innovated on two axes: improving the hardware, as well as building in additional software and services. The company seems especially proud of the latter, specifically what it calls Sure Sense. The technology will be included on all of the newly announced EliteBook PCs.

With Sure Sense, the company believes the lightweight software agent can react in real time to unknown threats, intelligently deciding whether they represent a risk to the system. (HP still recommends that users install antivirus software for comprehensive protection.) The idea, HP said, is to provide an additional layer of security against so-called “zero-day” attacks that may come out of the blue and install ransomware or worse on corporate machines.

HP will not charge for Sure Sense as a service, instead building protection into the price of the machine. (HP told reporters that it is working with an unnamed partner to create Sure Sense, and that more details would be available in the future.)

HP sees Sure Sense working with its established defenses inside the EliteBook line: Sure Click, which sandboxes browser tabs for increased security, and the HP endpoint security controller, with a new, protected 5th-gen Sure Start startup and Sure Recover backups.

Some of HP’s new hardware features also lend themselves to increased security and privacy. The most noteworthy are a 3rd-generation Sure View display option (available only on the 830 G6 and x360 830 G6, at least for now), which HP executives said performed more comparably to a physical privacy film on the machine. When activated, the Sure View technology dramatically reduces the viewing angle, helping prevent wandering eyes from snooping on your PC.

Likewise, the new 8-series EliteBooks include a physical privacy shutter—though it’s mounted behind the glass. Presumably that will reassure users who are concerned that hackers may be spying on them using the camera, and that also assumes that users will be able to see that the shutter is in fact physically covering the camera sensor. HP says that it’s also combined the HD user-facing video sensor with the IR depth camera. Unfortunately, HP (as well as its rivals) still haven’t announced technologies to disable the microphone, preventing remote users from listening in your conversation. The notebooks do include HP’s third, “world-facing” mic, which the company included to filter out background conversations that could impede a video conference call.

For those who aren’t concerned about anyone peeping over their shoulder, the EliteBook 830 G6 comes with an optional 1,000-nit display, specifically for working outdoors. We generally consider 260 nits to be sufficient luminosity for working indoors, so a full 1,000 nits should be appropriate for direct sunlight. There’s no indication what effect that 1000-nit setting will have on battery life.

It’s not quite clear how HP is justifying its claim of 18-hour battery life, but we’ve noticed the HP Spectre x360 make similar claims. Some competing Whiskey Lake notebooks are shipping with a battery-plus mode that extends life even longer than normal. One other feature that we like is a keyboard that features a full 1.5mm of key travel and 18.7 mm of pitch. Underneath are top-firing speakers.

Because of the varied options HP allows to business customers, we’ve used the 840 G6 as a representative summary of the available options: