Intel’s Optane Memory H10 SSD is one of those enigmas of PC hardware that can drive reviewers crazy. It is—simply put—a storage technology that is more responsive in some cases, but slower in others.

It’s also a technology you can’t choose for yourself. Currently, Optane Memory H10 is being sold only to PC OEMs, who will integrate it into space-limited laptops and eventually full-on gaming laptops.

Because it’s Intel technology, it’s not going work with platforms it’s not approved for (read AMD). As you start seeing it in new laptops, this review will help you decide whether it’s a feature worth seeking out.

What is Intel’s Optane Memory H10?

Intel officially names this device “Optane memory H10 with solid state storage.” It’s much easier to think of it as a hybrid drive, or two drives in one. On one half of the M.2 stick, Intel has shoved 32GB of Optane memory. The rest of the M.2 is used to house a 512GB QLC-based NAND.

The idea behind Optane Memory H10 is to use Optane Memory technology to accelerate performance of a slower drive by storing frequently-used files on the Optane memory. The concept is already in place for traditional hard drives, but it’s new for an SSD.

What’s not clear is whether it makes sense. When we first reviewed Optane Memory two years ago, we found it to be pretty impressive for accelerating dog-slow hard drives. It also seemed pretty promising against dog-slow TLC (triple level cell)-based SSDs.

A lot has changed with SSDs, though. TLC drives have gotten a lot faster. The other big change is that denser QLC (quad-level cell) drives have stormed the PC. QLC packs more data into each chip, which generally means a sacrifice in performance. With the Optane Memory H10, Intel is hoping to boost the performance of QLC-NAND SSDs.

Typical storage tests rely on synthetic benchmarks to measure a drive’s ability at various tasks. Optane’s unique properties make it harder to gauge, however. When originally released, 3D XPoint memory, created by Micron and Intel, promised “1,000X” the switching performance of the fastest NAND drives. With 3D XPoint in Optane, the promise has been low-latency performance that improves responsiveness but may not necessarily, say, blow away sequential writes or reads (file copying) or other tasks.

For example, synthetic tests such as Crystal Disk Mark will show Optane with much higher small file read performance than a comparable drive, but in other metrics such as sequential, high-queue depth reads, it can be slower.

Intel has pushed a message of real-world advantage rather than synthetic tests, however, so we decided to go along. We used a pair of -matching HP Spectre x360 13 laptops. Both featured Intel “Whiskey Lake” Core i7-8565U CPUs and 16GB of dual-channel RAM. Both laptops featured identical UEFI versions and identical versions of Windows 10.

The only difference was the drive. One laptop featured the Optane Memory H10 SSD with 32GB of Optane and 512GB of QLC NAND. The other featured Intel’s SSD 7-series 760P, which is built on 512GB of TLC NAND. It’s an acceptable NVME-based SSD, better than, well, SATA SSDs. The 512GB drive retails for about $118 on Amazon currently. Its score was about the same as Intel’s QLC-based 660P drive. Because the Optane Memory H10’s NAND side is essentially a somewhat slower 660P, it’s probably a fair comparison. 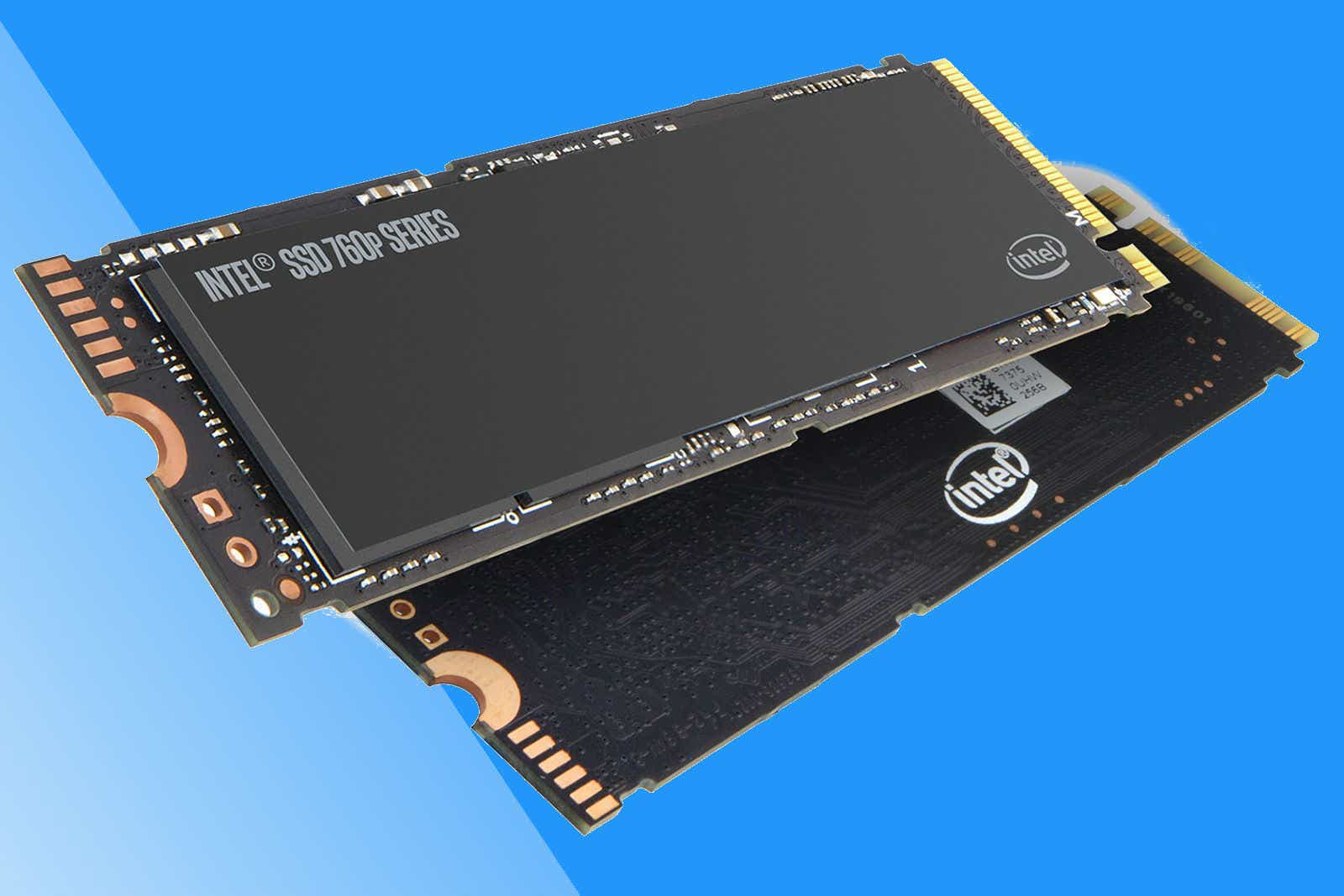 As we said earlier, synthetic benchmarks put the Optane H10’s 660P half in “adequate” range, with the Intel 760P SSD outpacing it in most tests. To see what Optane Memory acceleration tied to the 660P we skipped straight to the real-world tests.

We installed the latest version of Google Chrome, Microsoft Word, Excel, PowerPoint and Adobe Acrobat Reader on both laptops. We compared how long it took to launch the apps and open documents on both laptops.

Because this kind of organic testing can be really, really unreliable and difficult to measure as well as difficult to repeat, we decided record the laptops in action with both being controlled by the same mouse and keyboard. To do this, we used a Huintech Sync-Monster KMS-200. It’s essentially a reverse KVM that lets you mouse and keyboard around on multiple devices.

Intel said the Optane Memory H10 shines under heavy real-world loads, so we tried to simulate tasks such as copying a video file on each laptop while opening various documents in Word, Excel, PowerPoint, and Acrobat. We also launched Google Chrome. While this may not be something you do every day, it’s realistic that you might do this occasionally. You can’t ignore the results: We actually saw pretty much a 3X performance advantage in responsiveness during that task.

We decided to push it a little harder by copying the same video file while also decompressing a file using 7-Zip and then opening a Microsoft Word 365 document. Again, it’s a pretty harsh task, though realistic. While the Optane Memory H10 got us into our Word document in about 5 seconds, the TLC-based 760P took 29 seconds to open the file. In fact, we waited so long that near the end of the run, we went ahead and also launched Google Chrome with it preset to open four websites.

Because storage tests can often be dismissed without visual evidence, we also recorded it so you can see the side-by-side results yourself.

When and why it’s slower sometimes

It’s important to point out that in a lot of use cases the Optane Memory H10 was basically as fast as, or a hair slower, than the TLC 760P. For light-duty tasks, there wasn’t much of a difference at all.

That’s the real conundrum of Optane Memory H10: It definitely keeps you productive with what you’re doing right now, but at the expense of background-task performance. The question is one of priorities: opening a foreground app and doing other work without missing a beat, or waiting for those background tasks?

Intel’s guidance is that these situations can occur depending on the tasks. The Optane Memory H10 is still just two seperate x2 PCIe NVMe drives, while most NVMe SSDs will operate in x4. There can be times when the greater bandwidth of the x4 interface is an advantage.

We also noticed a very small CPU hit. The Optane Memory H10 typically worked the CPU a  little harder, or took a few seconds longer for the drive activity to clear. It’s not enough to care much, but there is a cost to having the CPU play traffic cop for a hybrid SSD.

Because you can’t actually buy Optane Memory H10 on its own today, we’re not rendering a verdict on the product. However, we can recommend whether you should seek this out in your next laptop.

It very much depends on the kinds of things that tick you off when computing. If, for example, you like to copy gigabytes of data to your laptop from a very fast external drive (think Thunderbolt 3 SSD), or make local copies of your files in your workflow and can’t start your work until it’s copied over, Optane Memory H10 might tick you off a little. That’s probably especially so if you tend to decompress files and wait for them to finish before moving on.

However, if your work flow is copying files and decompressing files while launching multiple apps until the system just stops responding—Optane Memory H10 is going to be a nice step up. Overall, it’s probably better for most people.