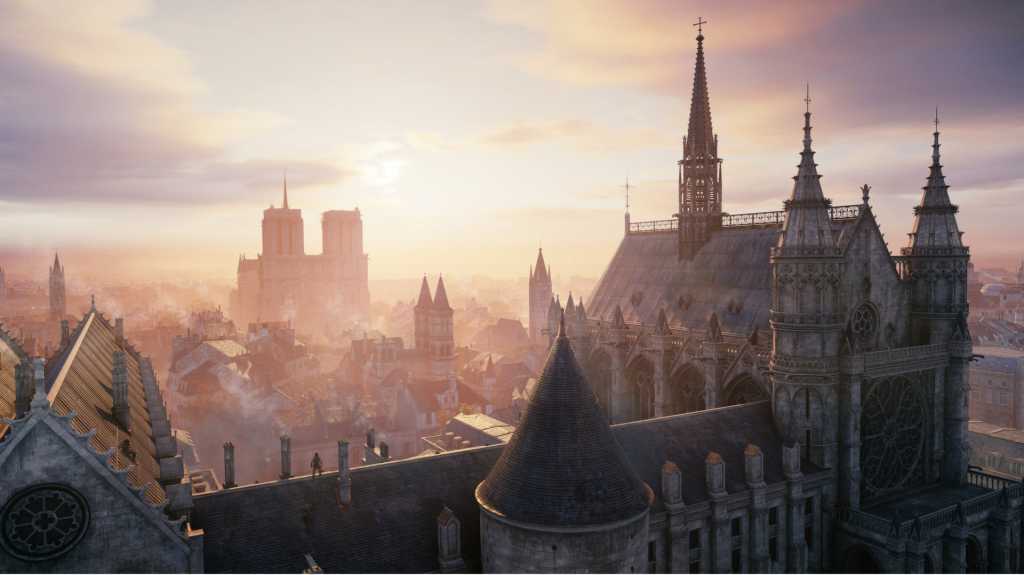 I’ve said for years that Assassin’s Creed is more impressive for its art nowadays than the games themselves, but still, who would’ve guessed that one day Assassin’s Creed would be used to restore a priceless piece of architectural history?

That news, plus a new Lego Star Wars, an Old Republic expansion and potential film adaptation, details for Netflix’s Witcher series, a remake of cult classic shooter XIII, and more.

This week’s first freebie is a big one, relatively speaking. You probably heard that Cathédrale Notre-Dame de Paris caught on fire this week. In the wake of that fire you maybe remembered that one Ubisoft designer spent two years of her life creating the Notre Dame model for Assassin’s Creed: Unity. Turns out that Notre Dame model might now be used in reverse, helping guide restoration efforts on the actual church. As some sort of weird (but nice) gesture, Ubisoft is now giving away copies of Unity through April 25.

We’ve also hit the two-week changeover on the Epic Games Store, which means yet another free game. This time around it’s Transistor, Supergiant’s cyberpunk tactics-lite game. It’ll be free through May 2, at which point the offer will change over to the oft-given-away World of Goo, for the five people who still don’t own it.

See you in Hades

As you might surmise from the title, this is the more high-concept of the two expansions, taking players to the Greek afterlife to meet up with Cerberus, Ares, Venus, and other mythological figures. Given how much I loved Origins’s similarly themed Curse of the Pharaohs, I have high hopes.

One definite delay and one “maybe” delay this week. First up, Steel Division 2. Originally set for a May 2 release date, Eugen Systems has now pushed the World War II tactics game back to June 20 (or June 18, if you buy the Digital Deluxe Edition), saying that “Army General, the single player campaign mode, is an entire new game within the game and it wouldn’t be polished enough to be released on May 2nd.”

Then there’s Halo: The Master Chief Collection. Originally we’d heard that the first game, Halo Reach, would be on PC sometime in April. Now…well, it’s April 19, and in case you haven’t noticed there’s no Halo on PC yet. The 343 publishing team’s noticed, at least, and put out a statement this week saying it might slip to next month. The exact wording is, “Previously I’ve said that ‘If things go according to plan, flighting should begin this month.’ As we’re now in the back half of April, I’m still optimistic this will be the case but it’s also possible those plans may not fully land as we initially hoped.” According to 343, “PC is considerably more complicated [than the Xbox One] and requires a lot more work.” I’d wager a May release at this point, but we’ll see.

We’re less than a week away from the release of Mortal Kombat 11, which means the deluge of trailers is aaaaaalmost over. Netherrealm’s saved the best for last: Those who preorder the game will get access to the ex-Emperor of Outworld, Shao Kahn himself. This week’s character trailer is happy to show him stomping on some skulls and thwacking people with his hammer.

There’s also a story trailer, though I’ll admit I’m not watching this one. I feel like plenty of great moments have already been shown, and I’d like to keep at least a few for the game itself.

It’s been almost three years since the last Star Wars: The Old Republic expansion, and I’d kind of assumed there just wouldn’t be another. In this era of games-as-a-service, three years is a millennia. That’s like, what, fifty Fortnite seasons? But I was wrong, and 2019 will see the release of a new Onslaught expansion, featuring two new planets, a new Flashpoint, a new Operation, an increased level cap, new abilities, and a story that pits the Sith Empire against the Galactic Republic on the planet of Corellia. You can find more details here, if you want ‘em. Otherwise, look for it in September—free for subscribers.

Revan? Is that you?

And speaking of the Old Republic era, Lucasfilm president Kathleen Kennedy dropped some tantalizing info at the recent Star Wars Celebration. MTV asked about the potential for a Knights of the Old Republic adaptation, to which Kennedy said “You know, we talk about that all the time. Yes, we are developing something to look at.”

Doesn’t mean it’ll happen, but keep your fingers crossed and you might see Darth Revan on the big screen someday.

Lego Star Wars still might be my favorite Lego game. It isn’t the best, nor the most ambitious, but it did the whole formula first—and given how formulaic those games were, that means a lot. But there’s been a lot more Star Wars in the years since, so it might not surprise you to hear there’s a new Lego Star Wars game…maybe in the works? And maybe releasing this year?

Again, this comes courtesy of an interview at Star Wars Celebration, this one with Skywalker Sound’s Matthew Wood, who seemingly revealed the game’s existence in an offhand comment. For what it’s worth, Eurogamer then confirmed the project later in the week, saying it will span all nine films, “the ‘ultimate’ Lego Star Wars game,” as Eurogamer puts it.

Of all the remasters and remakes this generation, I’ll admit: I didn’t expect to see XIII among them. The shooter was generally well-regarded at the time, sure, but mostly for its comic book art style and neo-noir trappings. It’s not necessarily a game you’d expect to get cleaned up and re-released 15 years later. And yet that’s what PlayMagic has done, with a new XIII release set for—appropriately—November 13. Check out the trailer below, though it doesn’t show much.

Witcher on the way

That Witcher adaptation at Netflix is a lot closer than I anticipated. Seems like just yesterday we saw Henry Cavill in a terrible wig, and now Deadline’s reporting that it will launch in the fourth quarter of 2019. That’s just six months away! As for what it covers, let’s turn to Deadline: “The series…follows a solitary monster hunter struggling to find his place in a world…” Sounds like a Lifetime TV movie, no? A pleasant coming-of-age tale, with the occasional striga to fight.

Last but not least, Square Enix confirmed Octopath Traveler will make its way off the Nintendo Switch this year, arriving on PC on June 7. It’s not necessarily the type of game I’d want to play on PC, but I’m all for games coming to PC regardless. Check out the trailer below, or just go watch someone’s Switch run-through if you want a better idea how it plays.