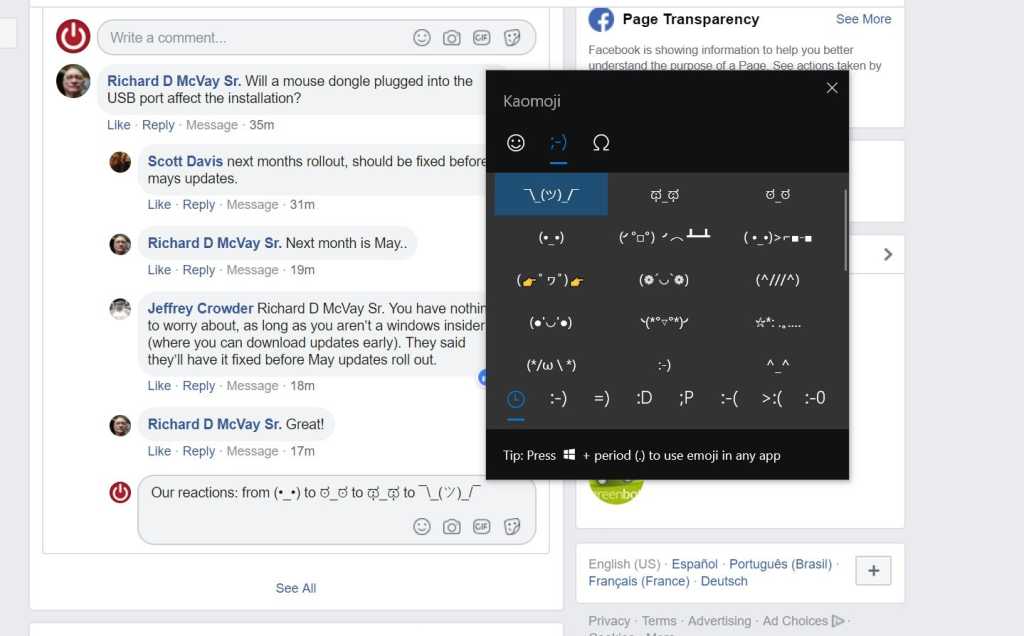 How can I type kaomoji on my PC? And what are kaomoji, anyway? Fortunately, the answers to both questions are simple, and easily accessible within Windows 10’s May 2019 Update. The familiar emoji keyboard within Windows has been expanded to include both kaomoji and symbols, and adding them to Facebook, Twitter, and other social media apps is extremely easy.

What’s a kaomoji? A kaomoji is simply a more complex emoticon, the predecessor to the emoji. You’re probably familiar with the smiley 🙂 or winky 😉 which consist of familiar punctuation symbols combined to form an expression.That’s an emoticon. Emoji are simply pictorial representations of emoticons, so that a winky symbol is represented as a 😉.

A kaomoji, meanwhile, is to an emoticon like a finished painting is to a rough sketch: a complex arrangement of symbols that approaches art. With a kaomoji, you can express a complex idea that an emoji or emoticon simply can’t: flipping a table in anger (╯°□°）╯︵ ┻━┻, a double finger-pistol gesture (☞ﾟヮﾟ)☞, or even the obscure meme where CSI Miami’s David Caruso takes off (or puts on) his sunglasses before saying something profound ( •_•)>⌐■-■.

How do you access emoji, or kaomoji, or symbols within Windows 10? You can do it all with the same Windows shortcut: the WIN + ; shortcut (or WIN + .), where you hold down the Windows key, then type a semicolon. You can even access the new Emoji 12 emoji, which include representations of things like diving masks and flamingoes, from the same keyboard. Alternatively, you can right-click a text box, and you should see an emoji option pop up.

There’s just one catch: You’ll need the Windows 10 May 2019 Update to access the new kaomoji, also known as version 1903. If you’re having trouble accessing these new emoji and kaomoji, type winver into the Windows search bar, then make sure the second line says “Version 1903.” The May 2019 update started rolling out May 21, and users will receive the upgrade in waves. (If you want the May 2019 update right away, here’s how to get it.)

How to type kaomoji under Windows 10

There are some subtleties to typing kaomoji under Windows 10, however. For one thing, they’re confusingly organized.

The emoji keyboard contains three tabs: emoji, kaomoji, and lastly symbols of all types. The emoji tab is well organized, with a search function at the very top: type in “lips,” for example, and the “kiss” 💋 and “mouth” 👄 emoji will appear. For each emoji you’ll also receive some explanatory text describing each one.

Tab over to the kaomoji keyboard, and there’s nothing like that—yet. Hopefully you’ll have a rudimentary knowledge of what symbol means what, or that they’re detailed enough to figure out on your own. Yes, there’s a nav bar of sorts on the bottom, a “I didn’t even see that” way to navigate between happy, sad, silly, and other kaomoji—but the nav bar itself is also done in emoji, which seems a little much. Pop-up text provides some rudimentary explanation. This is a largely self-guided tour.

(That same odd, bottom-row nav bar applies to the symbols menu, too. At least there’s some explanatory text when you hover your cursor over the navigation bar, with categories that include “general punctuation,” “currency symbols,” “Latin symbols,” and more.)

Remember that emoji are single symbols, so that you won’t have to worry about line breaks. Kaomoji and emoticons are not so lucky, and a long, complex cluster of symbols may end up broken over two lines by an app. You’ll need to plan accordingly. Fortunately, whether they be emoji or kaomoji or ordinary symbols, they’re all supported by Microsoft apps like Word, Edge, and even Notepad, so you should be able to type them within any app you choose. Just make sure you have the window or app in focus or active, open the emoji keyboard, and type away. While an early implementation of the emoji keyboard allowed only one character per instance of the keyboard, that’s a bug that’s been fixed. Type as many as you want!

Because you’ll be using this keyboard to type emoji as well as kaomoji, there’s one change worth noting: the location of the “swatch” drop-down menu, a key feature in the emoji keyboard we introduced you to two years ago. Instead of putting it under the “most recently used” tab of the emoji keyboard—the one you’ll see first every time you open it—Microsoft has moved it to the fourth emoji tab on the bottom. (It’s there in the third tab if you’re viewing this on something earlier than the May 2019 Update.) Regardless, if you hover over it, you’ll see it labeled as People. Only emoji have various color options.

Microsoft could benefit from some improvement in the overall emoji keyboard experience: for example, a clearer signal, via color or delineation, that a search box is actually present. Asking someone familiar with kaomoji to add some brief explanatory text that would display while your cursor hovered over it would provider a gentler entrance for those who have never used them before. A resizable window? Yes, please. You can’t type kaomoji, then text, then another kaomoji while the keyboard remains open. And Microsoft really needs to fix the bug that causes the emoji keyboard to move slooooowly across your screen when you reposition it.

Otherwise, though, it couldn’t be simpler: the WIN + ; opens the door to a new way of expressing yourself. Welcome to kaomoji!╰(*°▽°*)╯

This article originally published May 17, 2019.