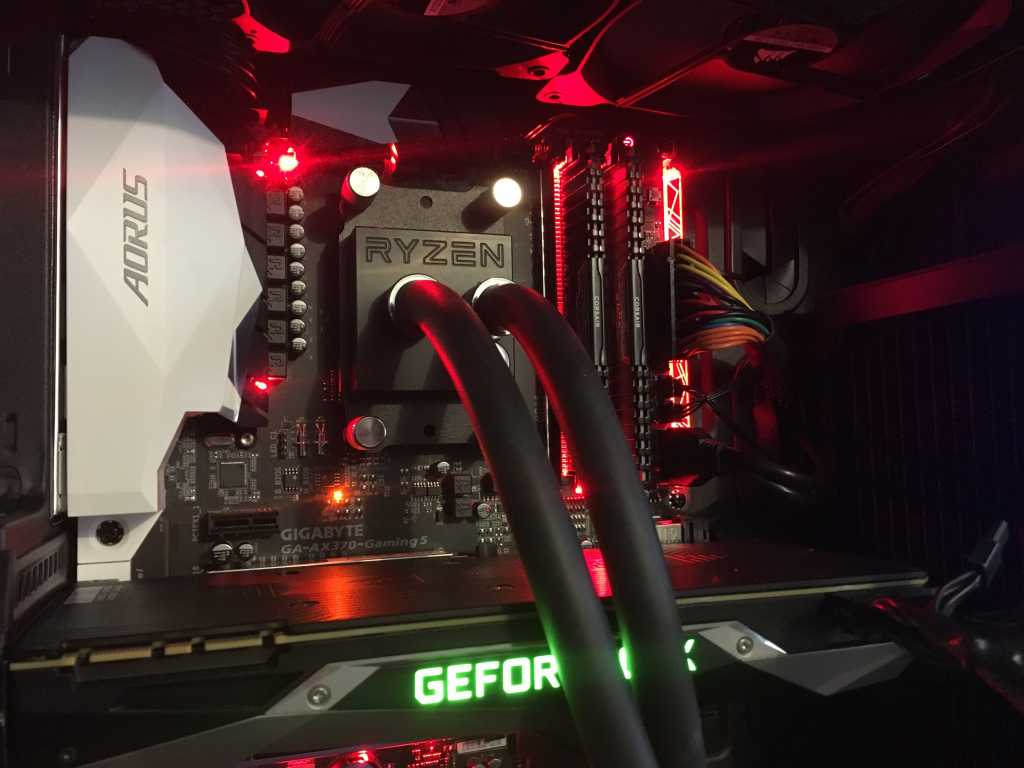 No, Ryzen chips don’t offer the same raw gaming performance as Intel’s quad-core chips. That’s indisputable. But neither do the high-end Intel Extreme Edition processors that are Ryzen’s true peers. While comparing Ryzen against Intel quad-cores is illuminating for potential upgraders focused solely on gaming, it’s not quite apples-to-apples. A more realistic way to look at it: Intel’s quad-core Core i5 and Core i7 chips are excellent gaming chips with decent productivity chops, while Ryzen and Intel’s Extreme Edition CPUs are killer productivity and content-creation processors that are decent in gaming.

Ryzen’s damned affordable pricing, however, goes a long way toward bridging the gap.

Yes, you read that right. For the same price as Intel’s cheapest 8-core processor, you can pick up a competitive 8-core AMD chip and the most powerful graphics card ever released. That’s an eye-opener.

In response to criticism over Ryzen’s gaming performance, AMD noted that the performance gap shrinks when your pair the processor with a potent graphics card and game at 4K resolution. That’s true! While doing so doesn’t reflect the pure gaming potential of a CPU (which is why in our Ryzen review we tested at 1080p), strenuous 4K gaming shifts the system bottleneck from the processor to the graphics card instead, which can even out the real-world playing field between CPUs of varying gaming-performance chops.

With a Ryzen chip and Nvidia’s monster graphics card in hand, it’s time to put that theory to the test. Here are some brief benchmarks showing how the dynamic duo fares in a handful of games at 4K and 1440p resolutions—for less than the cost of Intel’s cheapest 8-core chip alone.

First, a quick refresher on the hardware we’re using, followed by some test results, before finishing with caveats and the future!

The $330 Ryzen 7 1700 is AMD’s most affordable high-end Ryzen chip, but it still packs 8 cores and 16 threads of power, with a 3GHz base clock speed and 3.7GHz maximum boost clock speed out of the box. You can see its performance in PCWorld’s Ryzen review. Nvidia’s $700 GeForce GTX 1080 Ti, on the other hand, is the most ferocious graphics card ever, with even more performance than the mighty $1,200 Titan X.

The rest of the system is identical to my ultimate AMD gaming PC build. I just swapped out the processor and graphics card. Since I’m trying to keep this as close to an out-of-the-box experience as possible, I haven’t tinkered with RAM speeds or done any of the other tricks AMD suggests to improve gaming performance. (More on that later.) I am running the latest stable BIOS, however, and switched Windows from its default Balanced power plan to High Performance to allow Ryzen’s on-CPU management technology to operate correctly.

Illustrating how the Ryzen 7 1700 and GTX 1080 Ti perform in tandem at 4K resolution games is the main goal of this article. That said, for reference I’m also going to include GTX 1080 Ti performance results from PCWorld’s Intel Core i7-5960X-based GPU testing system in these charts. It’s not quite the controlled apples-to-apples comparison you’d find in a formal review, but the 5960X is also an 8-core, 16-thread part, and the Core i7-6900K’s direct predecessor. It’s also paired with 16GB of DDR4 memory, just like the Ryzen rig.

As always, I benchmarked every game using the default graphics settings unless otherwise noted, with all vendor-specific special features—such as Nvidia’s GameWorks effects, AMD’s TressFX, and FreeSync/G-Sync—as well as VSync and frame-rate caps disabled. These four games are among the ones we regularly use for GPU benchmarking, not ones specifically picked to highlight Ryzen strong points. Each was tested until Ryzen’s weaker-than-Intel-CPU gaming performance was revealed.

Got it? Good. Let’s start with The Division, a game that AMD highlighted to the press as having solid performance with Ryzen chips.

Next up: Far Cry Primal.

Finally, let’s take a peek at Rise of the Tomb Raider and Ashes of the Singularity at 4K resolution. Ashes was tested in both DirectX 11 and DirectX 12 modes.

The frame rates are still nothing to sneeze at here. These games hit 60fps or more on Ryzen at 4K resolution! Yet even with the brute force of Nvidia’s monster, Intel’s older 8-core Haswell-based chip clearly delivers more.

All about the Benjamins

Again: This Ryzen system delivers damned fine gaming performance even if it isn’t best in class.

Again: The Ryzen 7 1700 and GTX 1080 Ti combo costs less than the Core i7-6900K alone. Pairing a 6900K with Nvidia’s beast would add a whopping $720 dollars to the cost of a build like this. That’s more than the cost of many complete gaming-dedicated PCs.

These charts and comparisons are invaluable, but you can’t take those real-world considerations out of Ryzen’s performance story. If you need the best of the all worlds, Intel’s Extreme Edition chips can deliver that at a far higher cost. If you need a pure gaming rig, Intel’s quad-core chips clearly offer the best price-to-performance value. But if you’re looking for a great productivity machine with good gaming chops, Ryzen offers that for far less than 8-core Intel processors, even if there is some potential compromise in raw frame rates.

There’s no getting around the fact that Ryzen isn’t as strong as Intel chips at gaming. That was revealed in extensive Ryzen review testing and confirmed in critiques by other publications. While AMD says the deficit is reduced at higher resolutions, the mammoth power of the GTX 1080 Ti shows the gap clearly at 1440p in Division and Far Cry, and even at 4K with Tomb Raider and Ashes of the Singularity—though again, all of those games are eminently playable on Ryzen.

The million dollar question: How will Ryzen processors behave in tomorrow’s games?

AMD says it has nowhere to go but up.

“CPU benchmarking deficits to the competition in certain games at 1080p resolution can be attributed to the development and optimization of the game uniquely to Intel platforms–until now,” AMD corporate vice president John Taylor told PCWorld just before Ryzen’s launch. Most games simply haven’t been designed to work around 8-core, 16-thread processors—even AMD stalwarts like Ashes of the Singularity.

Taylor provided quotes from the developers of both Ashes and Total War: Warhammer stating they’re seeing performance upticks with early Ryzen optimization efforts, and emphasized that AMD’s on pace to deliver over 1,000 Ryzen kits to developers by the end of 2017. The company also just signed an unprecedented multi-game, multi-series technological partnership with Bethesda to implement core-hungry Vulkan tech in its games after Doom’s spectacular success.

Ryzen’s a young platform with plenty of room for polish. Intel’s high-end X99 platform suffered from growing pains too, remember. Theories about Ryzen’s gaming performance are everywhere you look in online forums, but it certainly seems possible that a mixture of Windows updates, BIOS revisions, and other optimizations could push Ryzen’s gaming performance even higher in the future. Not that you can bank on that today.

That said, if you’re looking to speed up your Ryzen PC’s gaming right now, there are several steps you can take to potentially do so. We covered most of them at the end of PCWorld’s Ryzen overview, from enabling Windows’ High Performance mode to disabling Ryzen’s vaunted simultaneous multithreading. I have a few more tips, though.

The first ties directly into the Ryzen 7 1700 used today. Buy a third-party CPU cooler and overclock it! Early shipments of the chip have had no problem overclocking to the 3.8GHz to 3.9GHz range, with some hitting 4GHz and a select few managing to reach 4.1GHz. At that point, it essentially equals or beats the $500 Ryzen 7 1800X in performance, and benchmarks from PC Perspective and Gamers Nexus reveal that doing so can provide a solid boost in gaming frame rates. AMD’s new Ryzen Master overclocking tool makes it easy— see PCWorld’s guide to Ryzen overclocking for details.

Ryzen Master also provides the ability to disable some of Ryzen’s CPU cores, a pair at a time. Having fewer cores active could theoretically allow you to push overclocks even further, so play around with that. Creating separate Ryzen Master profiles for work and play could help you optimize each scenario, switching between profiles on-the-fly for maximum performance.

Ryzen also performs better if you increase RAM speeds. While I stuck to an out-of-the-box experience for this testing—which dropped my 3,000MHz Corsair Vengeance LPX RAM to 2,133MHz, ugh—you could see yet more uplift if you’re able to push memory speeds further. This is highly motherboard-dependent, though.

But really, just be realistic about what you’re getting with Ryzen—and what its true competition is. Octo-core chips will never compete with quad-core parts in sheer clock speed. Ryzen isn’t a mythological unicorn that excels in all situations. What it is is a damned good productivity and content-creation chip with damned competitive pricing and pretty good—though not best-in-class—gaming capabilities.