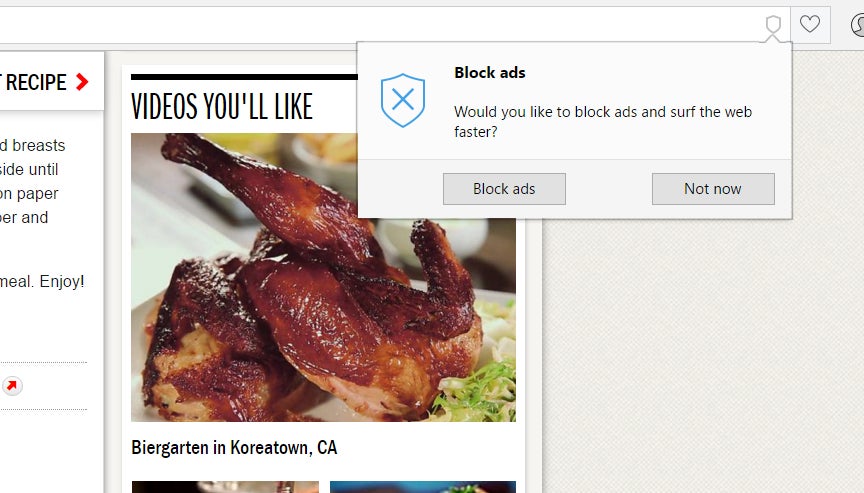 Two-thirds of Opera users still don’t use native ad blocking, according to the browser developer—so the company may turn on the feature by default.

A year ago, Opera announced that it was testing a browser with ad blocking built in, rather than relying on the plugins that other browser makers use. That version went into general release last May—and yet, only a minority of users actually enabled the feature.

Opera, though, remains committed to a faster web, which to its mind means disabling ads that continue to slow down the load times of webpages. “We will continue this mission by making our native ad blocking feature even better this year,” the company said in a statement Wednesday. “You can expect to see the first steps in this process this spring. Stay tuned for more speed and a more user-friendly experience.

“As for now, we only provide native ad blocking as a preference,” Opera added. “This may change, as we are currently evaluating whether we should help people be more active in blocking ads going forward.”

Opera said it believes that its browser, with ad blocking built in, is substantially faster than competing browsers like Chrome or Edge. Opera’s existing browser even includes a built-in “speed test” to compare the time it takes to load webpages, with or without ads.

According to the Http Archive, an ongoing archive of web performance data, the average size of a webpage has grown from 702KB in 2010 to 2,232KB in 2016. Opera blames the increase on the number of ads inside those pages, not on other factors like plugins. Standards like the lighter ad formats proposed by the Interactive Advertising Bureau don’t go far enough, according to the company, nor is a switch to lighter ads happening fast enough.

Opera, then, plans to keep on pushing ad blocking. “And we’ll do it until the problem is solved,” the company said. “The change must happen.”

Why this matters: It’s fair to say that Opera is a niche browser. NetApplications tracks Opera 42 at less than 1 percent of all browsers downloaded (native ad blocking first appeared in Opera 40). Still, the company has latched on to a populist movement: We all hate ads, even though they *ahem* pay for our groceries. For now, it seems like Opera is going to keep riding this horse as far as it will go.