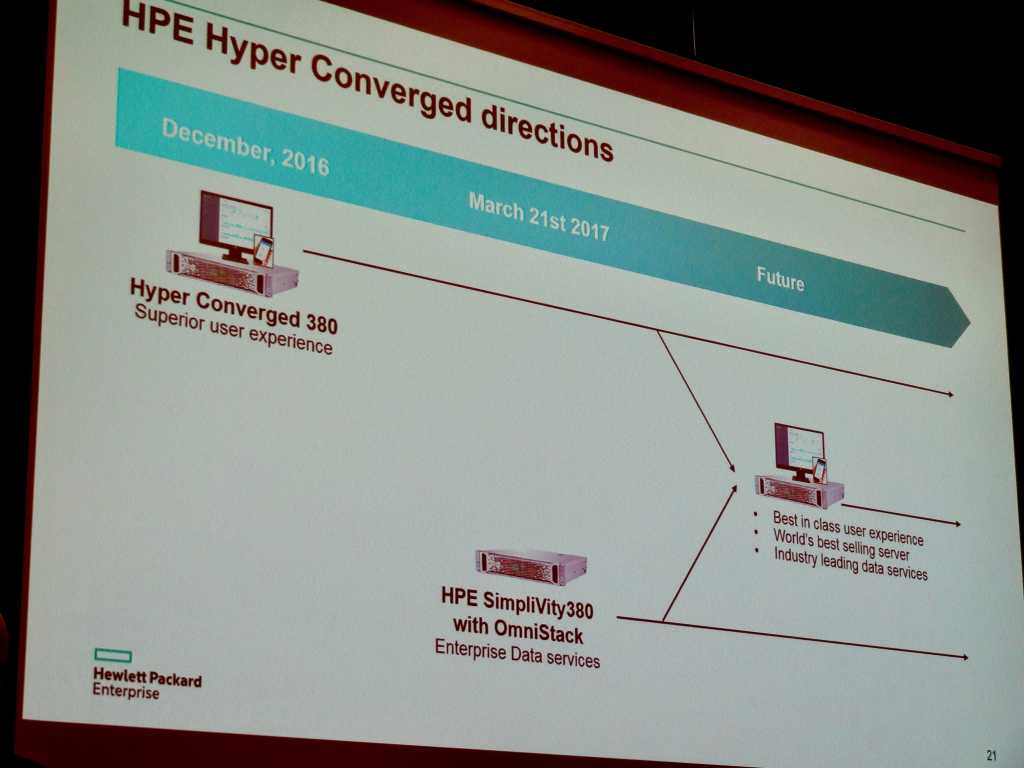 Two months after acquiring SimpliVity for US$650 million, Hewlett Packard Enterprise is beginning to reshape the company’s converged infrastructure offering in its own image.

Now HPE has qualified that software on its workhorse ProLiant DL380 server and will sell it as the snappily titled HPE SimpliVity 380 with OmniStack, Mark Linesch, the vice president for global strategy and operations of HPE’s enterprise group, said Tuesday at the Cebit trade show in Hanover, Germany.

SimpliVity’s website already lists the 380 among the product options, alongside versions of OmniStack tailored for Dell PowerEdge, Lenovo System x, and Cisco UCS servers for which it provided first-line support, handing off hardware matters to the vendors.

The website still lists the OmniCube for sale, too.

Linesch said HPE will continue to provide the same support for that hardware as SimpliVity did, although going forward, it hopes to see more customers on the ProLiant version.

SimpliVity used to guarantee that the OmniCube would offer a 90 percent capacity saving across production and backup storage while improving application performance, and HPE will offer the same guarantee for the SimpliVity 380, Linesch said.

Three versions of the SimpliVity 380 are available, with five, nine or 12 SSDs of a capacity of 1.9 terabytes each. The servers have dual Intel E5-2600 v4 (Broadwell) processors, and customers can configure them with up to 44 cores. Depending on how much RAM is ordered, usable memory will range from about 140 GB to 1.4 TB. Depending on the configuration requested by the customer, the total cost will vary between $26,000 and $100,000, an HPE spokesman said.

Last November, HPE released a software update for another converged appliance built on the ProLiant 380, the Hyper Converged 380. Building on the existing stack of VMware virtualization software and HPE management tools, the update added integrated analytics and multi-tenant workspaces to simplify the management of servers as a single resource pool.

HPE’s two hyperconvergence product lines will undergo some convergence of their own at some point in the future, combining the best features of the SimpliVity 380 and theHyper Converged 380 into a new product line, Linesch said. However, HPE will continue to sell the existing products, at least according to the slide he showed.

This story has been corrected to give the correct capacity for the SSDs in the eighth paragraph.