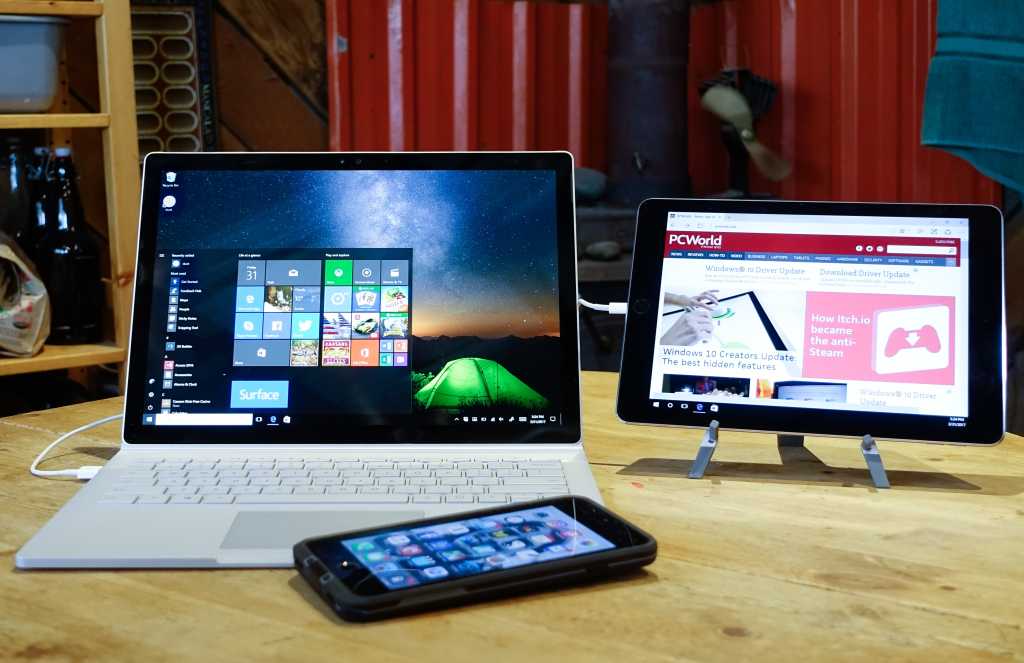 After close to 20 years of owning a Mac, I’m switching to a Windows PC and bringing you along for the ride. And what a ride it is—we’ve explored every angle:

This time, I want to talk about about how your iPhone and iPad can fit into your new Windows-enabled life.

Let me emphasize: It’s OK to stick with iOS. Just because you’ve had your fill of how your Mac operates is no reason to rid yourself of your iPhone or iPad. iOS is a stable, secure operating system with a vast number of apps that’ll meet the needs of most users. They’re self-contained devices, capable of working great all on their own. But a few tips will make using them in harmony with your new Windows 10 PC a cinch.

iTunes for Windows keeps you in sync

You could just download all of your music, movies and apps over Wi-Fi, but that eats up the gigabytes available for use on most monthly broadband plans faster than poop moves through a goose. Instead, use iTunes for Windows to store and shuttle content from your computer to your iOS devices. After transferring all the music, videos and podcasts you’ve downloaded from the iTunes Store during your years as a Mac user to your new laptop, you’ll be able to enjoy it all on your Windows 10 PC or transfer it to your iPad, iPhone or iPod.

While the app looks pretty much the same on Windows as it does in MacOS, recent Apple escapees may discover some UI differences that will give them pause. The File and Edit menus are located in the app window instead of in a menu bar at the top of your screen, for example. But once you get past this, it’s smooth sailing…as much as it ever is with iTunes.

With the app on your computer, you’ll be able to keep up with all of your TV season passes, and enjoy your Apple Music subscription as well as all of the movie rentals and podcasts that iTunes has to offer. Best of all, just like on MacOS, iTunes for Windows is free.

Here’s an unexpected bonus: All you need is an iOS device and a Lightning or 30-pin connector cable, and you have a second display for your Windows PC.

Duet Display is a $15 app that turns your iPad or iPhone into a high-resolution auxiliary monitor for your Windows 10 or Mac laptop. Setting it up is easy: Purchase and download the app from the iTunes App Store, then install Duet’s free companion software on your PC. Boom: You’re ready to roll with two displays.

Unlike similar apps, which connect to your computer via Wi-Fi, Duet uses your iOS device’s USB cable to push data back and forth, providing speedy 60-frame-per-second performance. Once you’re up and running, you’ll be able to treat your iOS device as you would any other external monitor, using it to view multiple windows at once, mirror your desktop, or go full-screen with a single app.

If you’re an iPad Pro user, Duet has the potential to be even more useful. For an annual $20 subscription fee, you’ll be able to use your Apple Pencil and pressure-sensitive iPad Pro display to work with your Windows applications.

If you’re an Adobe Photoshop or Illustrator aficionado, having Duet and an iPad Pro means there’s no need to fork over cash for an expensive Wacom drawing tablet. That’s a huge win, considering how much money you just spent on a new laptop.

Remember when we talked about Microsoft Office? It’s not just for your Windows 10 PC—a whole suite of the company’s apps are available to download from the iTunes App Store. The iOS versions of Microsoft Word, PowerPoint and Excel are all free to download and can be used to view any compatible documents, slideshows or spreadsheets. However, if you want to create new projects or edit files on the go using the apps, an Office 365 subscription is required.

Microsoft offers a 30-day Office 365 trial period, with access to the apps’ full capabilities. My take is that a subscription is a good investment. You’ll gain access to Microsoft’s apps on your laptop, iPhone and iPad, as well as a limited number of licenses you can pass along to other members of your family. Any Microsoft Office files you create using your iPad or computer can be uploaded to Dropbox or Microsoft OneDrive (there’s an iOS app for that too.)

But it’s not all gimme-money with Microsoft—the company offers some great free-to-use apps as well. The OneDrive app syncs seamlessly with the data on your Windows 10 PC, making it possible to access documents, photos, music—any kind of file you drop into it, really—on your tablet or phone. The tubes work in reverse, too: Many popular iOS apps made by Apple and third-party developers will allow you to send content from your iOS devices to your OneDrive account.

Microsoft Outlook and OneNote are both free to download and use as well. A desktop-class email/calendar app and note-taking whiz, respectively, both apps have become an important part of how I conduct my business, plan meetings, take notes, rough out story ideas, and generally get stuff done on a daily basis.

It’s time to play a game

In our next installment on switching from Mac to PC, we’ll talk about Windows gaming. Be prepared to be overwhelmed by choice!