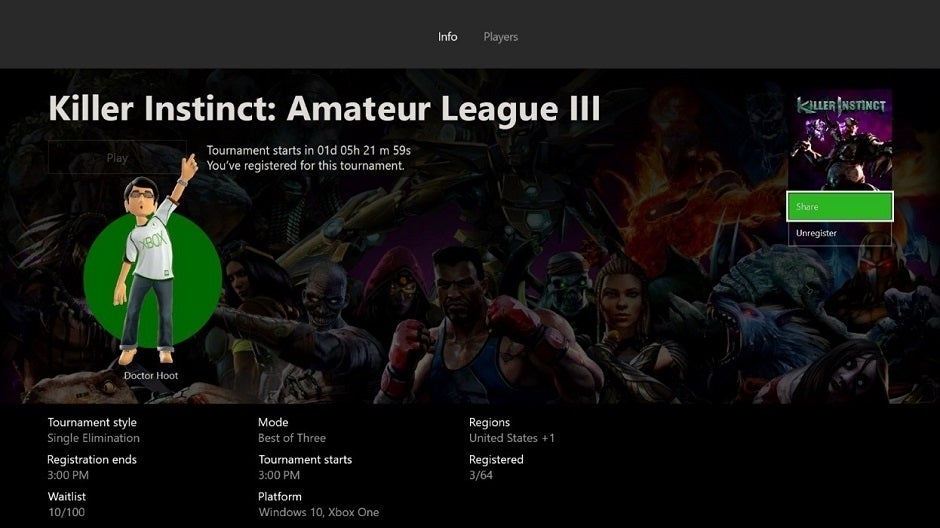 One of the features promised for the Xbox One Creators Update is slowly making its way in: player-generated Arena tournaments. That, plus a handy “who’s speaking” overlay, will be rolling out soon to members of the Xbox One Insiders program.

Microsoft rolled out the Arena feature for the Xbox One last fall, allowing users to participate in Microsoft-organized tournaments for an Xbox One game, Killer Instinct. But the new update allows players to participate in those hosted tournaments as well as those that players organize themselves—the feature Microsoft originally promised would sell the platform. Players will be able to organize those tournaments via Clubs, essentially clans of players who share the same interest.

According to Microsoft, though, the new player tournaments have two requirements: first, you’ll need to be part of the Xbox Insider program. You’ll also require the use of a Windows 10 PC to organize them.

To set up a tournament, users will have to go into the beta Xbox app on Windows 10, go to the Club tab, then click Create tournament. Once the tournament is published, then players on either the Xbox One or the PC can join. (Note that the Xbox app in question is the beta app, an app that must be separately downloaded from the Windows Store.)

Hey, who said that?

While player-generated Arena tournaments may be the highlight of the new Xbox Insider release, another feature will probably prove to be more useful: Party Overlay, which identifies the speaker in Party chat via an overlay message.

When you think about it, this is a pretty handy feature. Usually, raids and other group activities between a group of online gamers either feature its own dedicated text chat or VoIP server, using a third-party app like Ventrilo. That’s a problem for a platform like the Xbox, which favors voice communication but doesn’t allow those third-party plugins. Instead, Microsoft encourages users to band together using Clubs or the related Looking for Group tool, which seeks out random strangers who may be interested in helping out. Since you’ve never met them before, however, chances are you’ll have no idea who’s talking. Party Overlay works like the Achievement Tracker, popping up a small overlay to identify who it is that’s screaming for help.

Other random improvements are coming to Xbox Insiders in the coming weeks, Microsoft said, including:

Why this matters: Fulfilling a promise made last fall with player-generated tournaments is a step forward, though users would probably like to see this feature extended to other games. What this and Party Overlay demonstrate, though, is that Microsoft continues to thoughtfully improve the Xbox One platform.