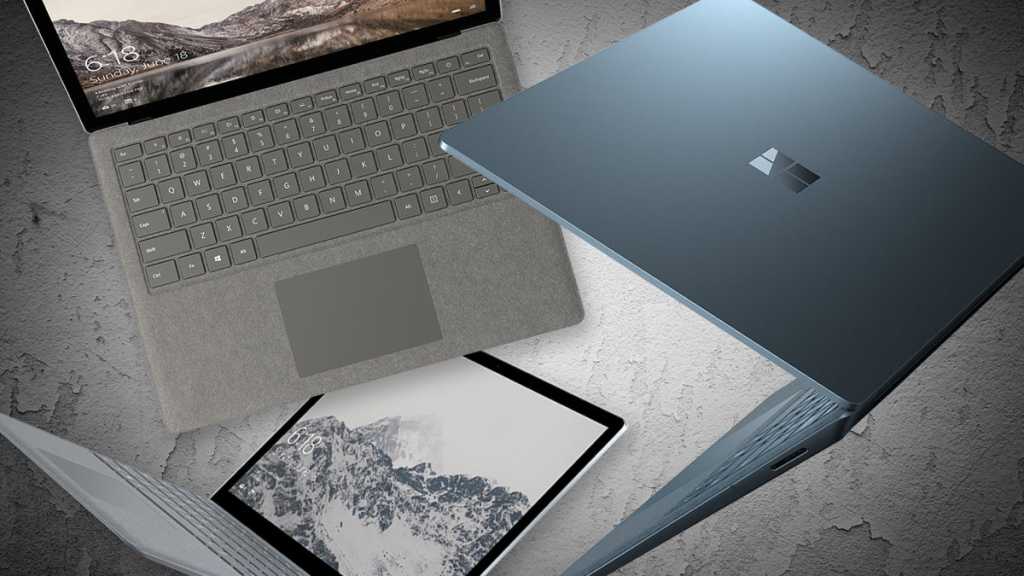 Updated Oct. 31, 2017 with additional data on the Surface Laptop, including updated color options and a Core i7 with a 1TB SSD.

Microsoft’s Surface Laptop is aimed at supplanting the MacBook Air as a college-student favorite. The svelte, stylish clamshell also fills a middle ground between its cousins, the Surface Pro 4 tablet and Surface Book powerhouse 2-in-1, providing a third option that could appeal to many regular consumers.

We got a good first impression of the Surface Laptop after going hands-on in advance of its June launch. Now that we’ve reviewed it, we can help you decide whether it’s a better choice than the Surface Pro 4, with its promise of a tablet that can be a full-fledged computer. Let’s dig in!

Price: Beyond many students’ budgets

Neither the Surface Pro 4 nor the Surface Laptop is especially cheap, as the prices above indicate. Selecting the right Surface Laptop comes with a caveat: It’s aimed at education, where you’ll be subject to the whims of professors who dictate what software to buy. The entry-level models with 4GB of RAM may struggle if burdened with demanding applications. The models with 8GB of RAM or more will have better staying power.

Buying a Surface Pro 4 is a bit more straightforward. Note that these prices do not include a Type Cover attachable keyboard, which costs an additional $130 to $160 depending on the model. While you could theoretically do without one, you’ll make your life a lot easier if you add a Type Cover to your shopping list.

The hinge and display mechanisms

Because the Surface Pro 4 is a traditional 2-in-1, it lacks a traditional hinge. Instead, a magnetic strip runs the length of the Type Cover, folding back over itself to allow the keyboard to lie at a slight angle. A pop-out kickstand panel supports the tablet from the rear, allowing it to recline from 90 degrees to about 15 degrees.

Don’t think for a second, though, of holding the Surface Pro 4 by the Type Cover. If you do so, or forget to support the tablet with the kickstand, it will flop over and rip free of its magnetic restraints.

The Surface Laptop has enough structural integrity that you can wave the Laptop around by the base, and it will recline to about 60 degrees without the need for external kickstand support.

Unlike convertible laptops, though, the Surface Laptop lacks a 360-degree hinge. While Microsoft made the hinge an important design element of the chunkier Surface Book, the Laptop’s hinge is virtually invisible unless you open the device and squint.

Of course, there’s one advantage the Laptop boasts, and that’s “lapability:” it feels natural and comfortable while on your lap. You can use the Surface Pro 4 on your lap in a pinch, though it’s just not in the same league as a traditional notebook like the Laptop.

Windows 10 S does allow you to upgrade to Windows 10 Pro, however, right from the Windows Store. From now until the end of 2017, that upgrade is free; after that, Microsoft may charge you $49 for the privilege.

The Laptop uses a more modern 7th-generation (Kaby Lake) Intel Core chip, specifically the 2.5-GHz Core i5-7200U, versus the 6th-generation (Skylake) 2.4-GHz Core i5-6300U found inside the Surface Pro 4. Based on our CPU tests, Kaby Lake gives a small advantage—but still a plus.

If you want to save some money, consider the Surface Pro 4 and its Core m options. Intel’s Core m may be slower than a full-fledged Core chip, but it provides sufficient performance for mainstream tasks.

Do keep in mind, though, that the lower-end offerings of both the Surface Laptop and Surface Pro 4 ship with 4GB of memory, which can be a bit painful to use with demanding applications or stacks of browser tabs.

Neither machine offers a discrete graphics option, though, so your performance will be somewhat limited compared to, say, the Surface Book.

Display: The proof’s in the pixels

Both the Surface Laptop ad Surface Pro 4 use Microsoft’s PixelSense IPS technology, offering 10-point multitouch displays. Both screens have the same 3:2 aspect ratio, too. Beyond that, they head in different directions.

The Surface Pro 4’s 12.3-inch display is small, but its 2,736×1,824 resolution looks very sharp. If you favor larger displays and can tolerate some compromise in resolution, choose the Surface Laptop. Its 13.5-inch screen has a resolution of 2,256×1,504 (201 PPI)—somewhat fewer pixels than the Surface Pro 4’s, spread across a wider field.

One of my strongest first impressions of the Surface Laptop was that its keyboard was a stiffened, rigid version of the Surface Pro 4’s Signature Type Cover: same touchpad, same keys, same Alcantara fabric. They’re both very good, though not quite as good as a traditional laptop’s keyboard, or the Surface Book’s.

Nevertheless, the keyboard is where buyers of each device will be able to express their personality. When you buy a particular color of Surface Laptop, you’re choosing the particular Alcantara fabric on the keyboard. Likewise, Surface Pro 4 buyers have a choice of the traditional $130 Type Cover (in bright blue, blue, black, red, and teal); a $160 black Type Cover with an integrated fingerprint reader for additional Windows Hello functionality; the Alcantara-covered $160 Signature Type Cover; and finally, a line of $160 NFL Type Covers emblazoned with the logo of your favorite team.

The Surface Laptop’s single 720p front-facing camera was designed for students who don’t especially care how they look while chatting with one another. The Surface Pro 4’s front-facing 1080p 5MP camera places a bit more emphasis on professional Skype calls. The Surface Pro 4 also includes an 8MP rear camera to compete with the hordes of iPad owners who inexplicably choose to take digital pictures with a tablet.

While the Surface Pro 4’s speakers are behind the tablet display (after frequent use, the right speaker on my unit is inoperable) the Surface Laptop puts its “omnisonic” speakers directly under the keyboard’s Alcantara fabric. They offer a decided volume advantage over the Surface Pro 4, with a richer audio experience. I tend to use tablets and laptops on a keyboard drawer, and the Laptop’s omnisonic speakers delivered a pleasing, slight reverb effect while playing back tracks with a strong bass line. While audiophiles will probably turn up their noses at both machines, the Laptop has a clear advantage here.

I always thought that the Surface Pro 4’s choice of a single USB 3.0 Type A port on the side of the display was sufficient, especially when connected to the $200 Surface Dock, which adds an additional four connectors. But two years on, the Surface Pro 4’s port contingent (1 USB 3.0, microSD slot, miniDisplayPort, 3.5-mm headset jack, and Surface Connector) looks a little slim. The world’s moving on to USB-C.

Unfortunately, that same argument can be leveled at the Surface Laptop, which also has but a single USB 3.0 Type A port, along with miniDP, 3.5mm headset jack. and Surface Connector. It ditched the SD card slot for cost savings. Both devices use 802.11ac for wireless connectivity, as well as Bluetooth. The Laptop uses the slightly more advanced Bluetooth 4.0 LE.

If you’re looking for a clear indicator of which device to buy, our performance benchmarks should provide it. The Surface Pro 4 simply can’t keep up with the Laptop in nearly all areas.

Consider the PCMark benchmarks, which measure everything from general office-suite performance (Work) to light browsing and photo editing (Home) to more intensive photo and video editing, plus more intensive gaming (Creative). Here, the Surface Laptop has the clear edge.

If you move on to the Cinebench benchmark, which stresses all of the processor cores and threads by rendering a 2D, computer-generated image, the Laptop comes out on top again, but by a narrower margin, showing how close the Skylake and Kaby Lake chips are in terms of performance.

Ditto for the Handbrake benchmark, which takes an open-source video transcoding tool and applies it to a top-tier Hollywood movie that we convert for use with an Android tablet. Again, there’s hardly any difference—less than a minute.

As we noted above, the real differentiator is battery lifel You may opt for the svelte thinness of a tablet, but the Surface Laptop provides truly all-day battery life. The Surface Pro 4 is nowhere close.

It depends on how you slice it, but the Surface Laptop weights just six ounces more, and (with the Core i5/4GB/128GB model) costs an additional $150 in price. If you’re not a heavy tablet user, that helps justify the price of the newer Surface Laptop and its vast improvements in battery life.

Between the Surface Laptop and the Surface Pro 4, choose the Laptop. It’s the better bet. Bang for buck isn’t Microsoft’s priority with these flagships, however, so value-seekers should cast a wider net. A comparison of the Surface Laptop against the Dell XPS 13 and HP Spectre x360 shows you some very competitive options.