We’re still waiting on Acer to release its show-stopping 4K HDR G-Sync monitor, the XB272-HDR, expected sometime before July. In the meantime, Acer just announced a new ultra-wide curved monitor, the Predator Z35P. The new display is available now for preorder on Amazon with an asking price of $1,100 and an expected ship date sometime in the next three weeks. 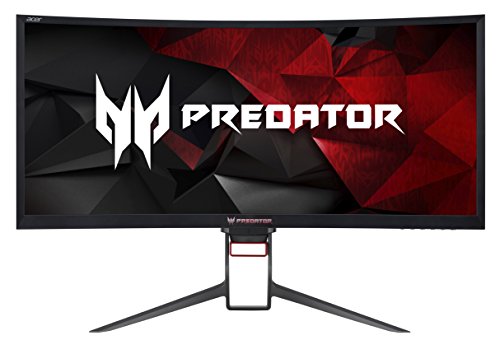 The Acer Predaor Z35P features a 35-inch vertical alignment panel with 3440×1440 resolution. The display has a 4ms response time, 300 nit brightness, and a 100Hz refresh rate.

For signal inputs, there’s one HDMI 1.4 port and one DisplayPort 1.2. On the back it’s got four USB 3.0 ports for peripherals like a keyboard, mouse, and headset. It also has two built-in 9 watt speakers, and a stand that allows for tilt between -4 to 35 degrees.

As this is a monitor built for gaming, the centerpiece, besides the immersive 1800R curvature, are the extra Nvidia goodies built in. The monitor comes with G-Sync, meaning refresh rates can be synced between a compatible GeForce GTX card and the monitor.

TFT Central reports that the monitor has a boost feature buried in the on-screen menu that lets you up the refresh rate to 120Hz. It’s not clear if that’s the case, but its predecessor, the Z35 (a 2560×1080 monitor), could be overclocked to 200Hz so it makes sense for the Z35P to have something similar.

Why this matters: As AnandTech points out, this is a display with few rivals. The only two that truly match it are the Agon AG352UCG and an HP Omen X display. There may not be many people willing to shell out the cash for a UW-QHD curved monitor, but for those who are, Acer’s Z35P adds one more option to the market.

UPDATE: In late May, Acer incorrectly announced that this monitor would have Ultra Low Motion Blur technology. After speaking with the company, this article was updated on July 10, 2017 at 2:41 AM Pacific to correct the error.