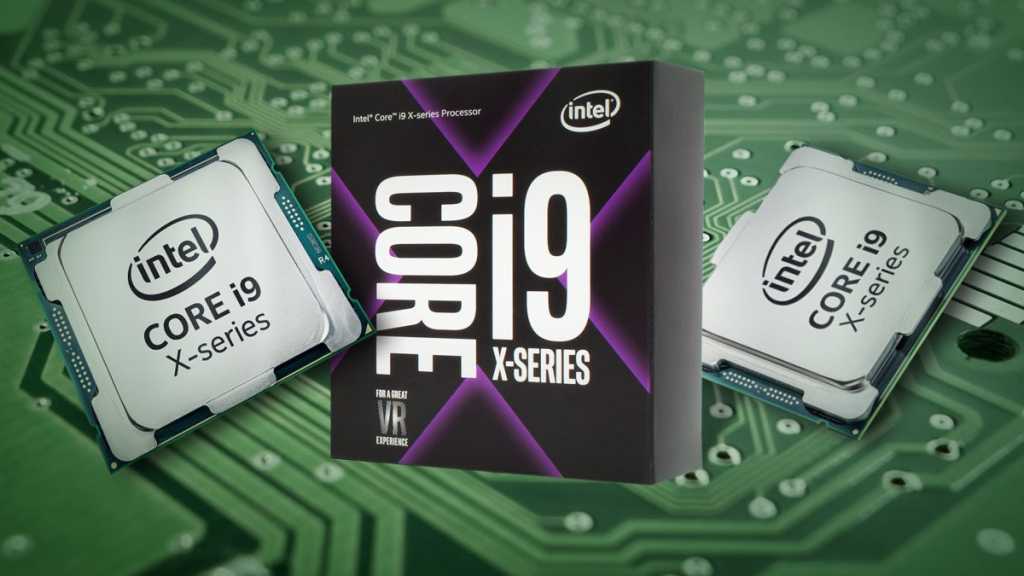 Intel’s Core i9 processor is what happens when Intel begins to worry that it might not have the baddest chip on the block. If you’re desperate to know how it performs against AMD’s Threadripper, you’re in luck—as of Sept. 25, we’ve tested the 18-core Core i9-7980X and the 16-core Core i9-7960XE!

Read on for the speeds, feeds, prices, and reviews of the new Core i9 chips, as well as all the details we have on the underlying technologies. In addition to the new Core i9 specs, we now know how the Core i9 performs as part of our review, and the price and availability of X299 motherboards. We’ll update this post with new information and testing as we receive it.

One point the review emphasized is to consider to what purpose you’re putting these chips. The Core i9’s massive core count makes it ideal for “multitasking” ( such as playing, recording, and streaming a game) or content creation. Otherwise, Threadripper offers a much more competitive solution.

And, if you haven’t guessed it already, that rounds out the Core i9 product family; all are now currently shipping. That includes the Core i9-7920X, which was slightly delayed. Now, however, you can buy the Core i9-7920X at Amazon for $1304.96—about $200 or so over the shipping price.

The processor specs that matter most concern performance. The raw clock speed determines how fast any one thread can be acted upon, while the core and thread counts control how many threads or tasks can be calculated in parallel. The Core i9 series excels in these metrics. But you’ll pay a hefty premium for that talent.

The new chips will consume 112W or 140W (depending on the chip), requiring a liquid-cooling solution. Intel has said there will be a 165W chip, too, but waited until early August to reveal it—or them, as it turns out. Intel will have three 165-watt chips: the i9-7980XE, the i9-7960X, and the i9-7940X. We tested the Core i9’s power consumption deep within our Core i9 review, and found that it consumes more power than the Threadripper, incidentally.

More importantly, all of the Core i9 chps use a new Socket R4, a 2,066-pin LGA socket that will require a brand-new motherboard. Intel’s Core i9 family is not backward-compatible with existing Skylake or Kaby Lake motherboards.

On May 30 at Computex, Intel formally announced the Core i9 high-end chips for PC enthusiasts. At the high end, it’s quite simple: The Core i9 family consists of what’s known as the Skylake-X architecture, with processors that include 10, 12, 14, and 16 cores.

From there, it becomes a bit complicated. For some reason, Intel decided that the 8-core and 6-core Skylake-X chips aren’t worthy enough, so they carry the Core i7 name. They share some common architectural features with the “true” Core i9 chips, though, so we’ve included them. The same goes for a second family of chips, known as Kaby Lake-X—basically the same seventh-generation CPUs you’ve seen on laptops and desktops for more than a year, but that also connect to the same X299 chipset as the Skylake-X chips do. The two Kaby Lake-X chips will be quad-core only parts.

Colloquially, you may also see these chips referred to as the Skylake-X family, the X-series of chips, or by their code name, “Basin Falls.”

Who should buy Core i9?

As you might guess from the prices, these chips aren’t for everyone. You don’t remotely need 18 cores and 36 threads unless you’re doing resource-intensive multitasking, such as video or gaming, or content creation.

How much will Core i9 cost?

What sort of integrated graphics does the Core i9 have?

None. Zippo. Zilch. We’ve been told the chips physically have no integrated graphics on on the die at all.

Where does Core i9 fit into the Intel Core family?

Core i9 is Intel’s fifth PC processor family, starting with the Core m and moving up through the traditional Core i3, i5, and i7 chips to Core i9. As the numerical sequencing suggests, Core i9 represents Intel’s most prestigious chip family, offering the best performance at the highest price.

It’s not exactly clear what makes a chip a Core i9. The lowest-end Core i9-7900X, for example, shares the same amount of cores as the previous 10-core Core i7-6950X. Still, if you are looking to buy or build today and want the fastest Intel has to offer, Core i9 is probably the easiest way to tell.

How does Core i9 relate to Broadwell-E?

Will I need a new motherboard for Core i9?

Yes. All Core i9 CPUs will use a new Socket R4, a 2,066-pin LGA socket that will require a brand-new motherboard. Intel’s Core i9 family is not backward-compatible with existing Skylake or Kaby Lake motherboards. Right now, there is only one chipset that supports the Core i9: the X299 chipset and associated motherboards.

The Core i9 is finally here and it’s a doozy. You can read all about it with our review of the Core i9-7980X and the 16-core Core i9-7960X. In short, this is basically Intel’s fastest consumer CPU to date.

The Full Nerd team discusses what the Core i9 could mean for you, especially with Threadripper also coming down the pike:

You can get a taste of Core i9’s innovations in this video.

New features: Why you’ll want to buy a Core i9

In addition to just the raw performance, the Core i9 family includes something new.

In its earlier Broadwell-E chips, Intel included something called Turbo Boost Max Technology 3.0, which identified one “best core” among all of the available cores on a chip. If and when the chip needed to be boosted, that best core would be the one selected to be dynamically overclocked. The new feature within most of the Core i9 chips is what Intel calls an updated Intel Turbo Boost Max Technology 3.0,  where the chip identifies not just one, but two cores as the best cores.

While the Core i9 can turn this feature on when needed, it will be used to best advantage when playing games with multiple threads, or performing simultaneous tasks like game streaming and music playback. This feature is not available in the lower-end Core i9 chips, though—only from the Core i7 7820X (8 cores, 16 threads), on up through the 7900X, 7920X, 7940X, 7960X, and 7980XE.

Not everything new about Core i9 is found within the chip itself. The related X299 chipset provides up to 24 PCI Express 3.0 lanes vs. the 8 PCIe lanes of Broadwell-E’s X99 chipset—important if you want to power your Core i9 system with multiple graphics cards. Additional PCIe lanes for high-speed PCIe NVMe drives can also be plumbed directly into the PCIe coming from the CPU itself. On CPUs with 10 cores and up, a full 44 lanes of PCIe 3.0 lanes are available for use.

Incidentally, if you buy and socket a Core i9-7900X, the motherboard will turn on 44 PCIe Gen 3 lanes and quad-channel memory support. Drop in a Core i7-7740K, and the motherboard will drop down to dual-channel memory support. From what we understand, there’s no technical reason for it, just “market segmentation,” which is a business school way of saying, “so we can charge you more.”

All this enables a range of options: Do you want to run four x8 graphics cards in a single Intel-powered PC? If so, you’ll want a Core i9 system.

The X299 chipset supports up to eight SATA 3.0 ports and 10 USB 3.0 ports. Finally, owning a Core i9 with an X299 motherboard means you’ll have access to Optane, Intel’s caching drive technology that can accelerate frequently used data.

There’s one more wrinkle: Intel’s VROC, or Virtual RAID on CPU. If it’s on, it allows a user to add up to 20 NVMe PCIe drives into a single bootable partition. The problem? It may not be free. The word is that Intel may charge up to $299 for the feature, unlockable with a special dongle. Worse still, it won’t work with Kaby Lake-X. This is still up in the air, so expect more details in the future.

Intel’s Core i9 is tailor-made for overclocking, as the entire family comes unlocked. Intel doesn’t recommend that you cool a Core i9 chip with air alone, though, so a straight fan-based solution is out. Instead, Intel recommends its own TS13X liquid-cooling solution, which will be sold separately. You can also buy your own third-party cooling solutions, as long as it’s rated for the TS13X.

Intel will also offer what it calls its “performance tuning protection plan,” a sort of insurance policy for overclockers. It’s a one-strike policy: The company will let you fry your chip once, just once, and send you a replacement.

Right now, there’s but a single chipset to accompany the Core i9: the X299. As mentioned above, the new chipset uses Socket R4, a 2,066-pin LGA socket that will require a brand-new motherboard. Intel’s Core i9 family is not backward-compatible with existing Skylake or Kaby Lake motherboards.

With the exception of the two Kaby Lake-based quad-core chips, the X299 chipset also provides the following features:

Some of Intel’s cheaper chips can only take advantage of a subset of these, though. The Core i7-7800X (6 cores, 12 threads) and Core i7-7820X (8 cores, 16 threads) rest on an intermediary rung where only 28 PCIe lanes total are available.

All of the various X299 chipset implementations support up to eight SATA 3.0 ports and 10 USB 3.0 ports.

There are two other under-the-hood improvements. By moving to Intel’s latest DMI 3.0 interface between the Core i9 and the X299, bandwidth is essentially doubled, allowing for the extra ports and PCIe lanes. Intel also moved to a different cache scheme that puts a smaller amount of cache closer to each individual core. You probably won’t see any overt signs of either in your day-to-day compute tasks, but those upgrades may show up in the benchmarks.

We have some details on the Core i9 motherboards that have been announced, from Asus, MSI, Gigabyte, ASRock, and EVGA. It appears that prices range from $300 to $400 or so. Intel said in August that more than 200 X200 motherboards are sitting on store shelves.

Some of the brands and families include:

For much of the last decade, Intel dominated high-end PC computing, and rival AMD struggled to keep up. That’s changing. AMD debuted its Ryzen processor to global acclaim, though the company’s performance claims came under some scrutiny. More recently, the company came out with its own version of the Core i9: Threadripper.

Right now, Threadripper lags slightly behind Core i9 in core count: 16 cores, 32 threads, compared to the Core i9-7980XL’s 18 cores and 36 threads. AMD’s traditional lever, though, is price. While Intel is asking enthusiasts to pay through the nose for Core i9 chips, AMD’s Threadripper comes at an enormous discount. That’s an enormous consideration when buying a chip like the Core i9: What’s its value proposition, and is it better than the competition?

We’ll keep you updated as more Core i9 news comes out.