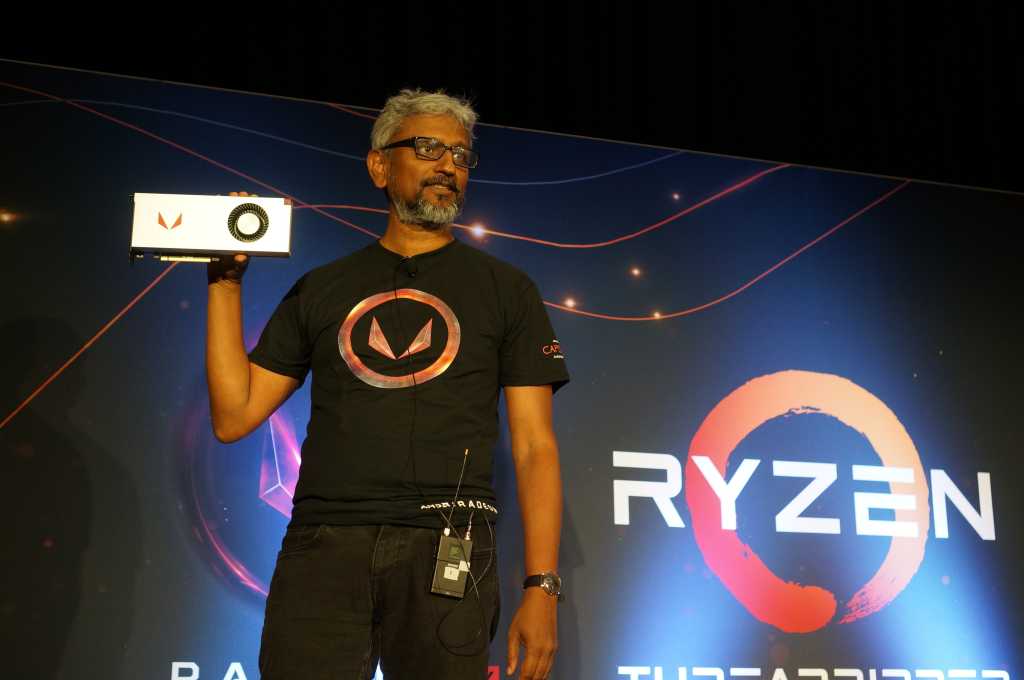 After months of anticipation, AMD on Sunday finally unveiled its Vega gaming GPU lineup that it expects will put the company back into the high-end graphics card game. Here are the details on Radeon RX Vega 64 and Radeon RX Vega 56.

All of the cards feature a DIP switch setup on the back similar to that of the Radeon Pro Frontier Edition, letting you vary the LED color. All four iterations will offer three DisplayPort 1.4 ports, and a full-size HDMI 2.0 port, as well. The cards should be available August 14.

Responding to the scarcity of Radeon GPUs due to the coin-mining craze, AMD graphics chief Raja Koduri said he often hears complaints.

To help ensure cards get into gamer’s hands, AMD has come up with the “Radeon Pack” concept, which gives gamers discounts when the GPUs are purchased with other hardware. For example:

The hardware discounts will be awarded when a gamer adds a graphics card to his or her cart at an online store. Once that happens, the discounts for the Samsung CF971 FreeSync monitor, Ryzen 7 and an X370 motherboard will be made available. Those discounted purchases, however, must be made immediately at check out, and won’t be available again.

So how does this help gamers? That’s the tricky part. AMD hopes that miners will gravitate toward the cards that don’t ship with the game pack or optional hardware discounts. This could, in theory, give gamers a better chance at snagging a Vega card, even if there’s a cost premium.

AMD’s graphics cards haven’t typically been power-efficient, and it doesn’t look like Vega will change the status quo. AMD said the total board power for the base Radeon RX Vega 56 is 210 watts, while the air-cooled Radeon RX Vega 64 (including the aluminum LE version) is 290 watts. The liquid-cooled version pushes 350 watts under heavy load.

All three Radeon RX Vega 64 variants we saw had a pair of 8-pin power plugs. It wasn’t clear what the Radeon RX Vega 56 required, but since it’s based on the same reference board, it’s likely to also have connectors for two 8-pin connectors as well. As a 210-watt GPU though, it’s unlikely to ever come close to taxing those connectors.

AMD didn’t provide full performance benchmarks of the Vega series, but some tests the company revealed before its launch event on Monday implied that the Radeon RX Vega 64 can mostly go toe-to-toe with Nvidia’s GeForce GTX 1080.

Playing several games on an ultra-wide-angle 3440×1440 monitor, AMD said the Radeon RX Vega 64 hit between 53fps and 76fps. AMD’s numbers showed that while the GeForce GTX 1080 could push 78fps on the top-end, the minimum frame rate of the GeForce GTX 1080 dipped a little lower to 45fps.

The higher minimum frame rate of the RX Vega 64, AMD officials said, can be credited to its use of the high-bandwidth cache controller and HBM2 memory.

AMD also said that in more than 100 games playing at 4K resolution, the Radeon RX Vega 64 can push more than 60fps.

When asked if AMD is concerned that it’s now just coming out with a card that can compete with an Nvidia GPU that arrived some 14 months ago, AMD officials said they see upsides: Currently they have zero percent of the high-end GPU market, but now have a fighting chance for 95 percent of that hardcore enthusiast market.

Although no performance numbers were shared on the lower-priced Radeon RX, officials hinted it would give the GeForce GTX 1070 a good run for the money.