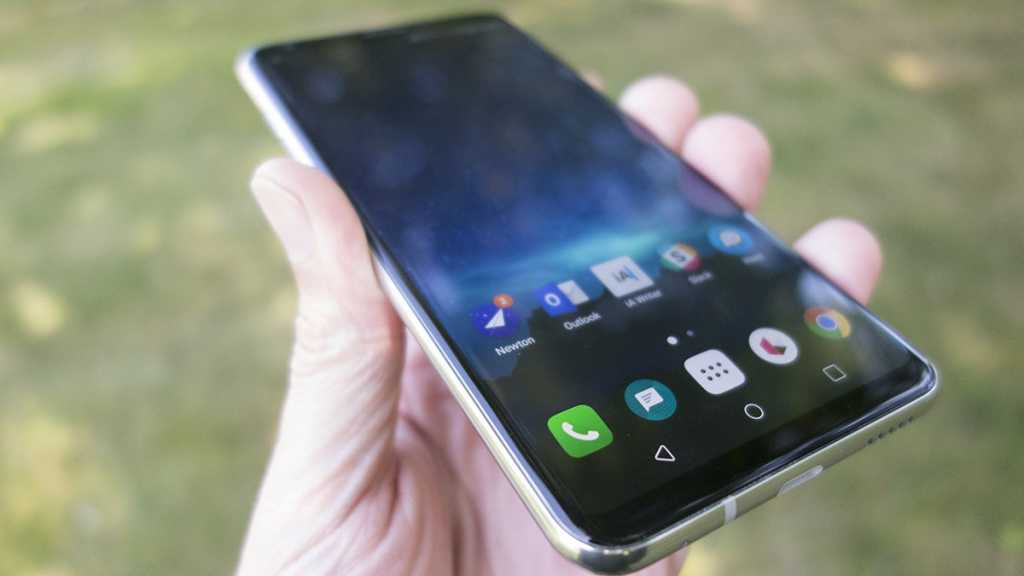 The V30 isn’t the typical fall flagship from LG. While the V20 was a bountiful bag of tricks for hardcore Android nerds, the V30 is more subtle and refined—LG’s bid to make a premium Android phone that appeals to a wider audience.

The philosophy shift starts with ditching two novel features that were unique to the previous V phones: the removable battery and the second screen. While their usefulness was debatable, they definitely gave the earlier V phones some identity, and there will certainly be a faction of LG fans who rage-tweet about the loss.

But for everyone else, the V30 could be the best phone of the year. The competition is fierce with the Note 8 and Pixel 2, not to mention the iPhone 8 if we’re talking about the entire phone universe. But LG has built a compelling phone that looks good, runs fast, and still manages to deliver features you won’t find on any other smartphone.

To look at it, you wouldn’t know the V30 is a follow-up to the V20. It takes most of its design cues from the G6, with thin bezels all around, and rounded corners on the display. Its chin is so thin, in fact, LG had to put its logo on the back for the first time (not that I’m complaining).

At 6 inches, its screen is bigger than the 5.7-inch screens on both the V20 and G6, but it’s not just the size that’s changed. The 1440×2880, 18:9 display that LG pioneered with the G6 makes its way over to the V30, and for the first time, LG is using its P-OLED tech in a major smartphone. Put the V30 side by side with the G6, and the difference is unmistakable. The V30 delivers deeper blacks and better contrast than the LEDs phones that came before, as well as a nice design touch with 2.5D curved edges on the glass.

Around the back, LG’s rear power button/fingerprint sensor remains, as does the dual camera, though the camera assembly is much smaller and the bump on the V30 is far less pronounced than on the V20. And while the V30 doesn’t have a removable panel to swap out the battery, the consolation prizes of IP68 water resistance and wireless charging are acceptable trade-offs.

The inside of the V30 is just as impressive as the outside. There’s a top-of-the-line Snapdragon 835 chip, 4GB of RAM, 64GB or 128GB of storage, and a 3,300mAh battery. Like the V20, you also get 32-bit quad DAC for true hi-fi streaming, along with a pair of high-performance microphones. The upgraded DAC is more customizable with four sound presets, and if you subscribe to a service that streams master quality authenticated (MQA) sound files, the V30 will actually be able to play them.

And then there are the cameras. LG’s V phones have always delivered excellent camera features—the V10 had optical image stabilization (OIS) and dual lenses long before other major manufacturers jumped on the bandwagon—and the V30 continues this tradition. The main camera clocks in with 16 megapixels and an f/1.6 aperture (the fastest ever on a smartphone), and boasts a “crystal clear” glass lens rather than a traditional plastic lens. The wide-angle camera, meanwhile, gives you 13 megapixels and an f/1.9 aperture.

There’s also a new photo service called Graphy that lets you see how stellar images are shot, and then borrow their settings for your own photos. For example, if you’re trying to photograph a sunset, you can select one in the Graphy gallery right in the camera app, and it will automatically import the same ISO, white balance, and exposure settings into your camera.

The V30 really ups its game when it comes to video, too. Along with OIS and a wide-angle lens with 30 percent less distortion, LG is introducing a series of “cine effects” that apply preset color grades while shooting. The effects are subtle and artistic—and much more appealing than some of the messy, one-hue-fits-all filters you’ll find in other camera apps.

And the video tricks don’t end there. With Point Zoom, you can lock in on a subject, and the video camera will stay focused and steady on the subject as you zoom in on it. Once you’re done shooting, you can stay right on your phone to finish your project. LG’s new Quick Video Editor brings the ease of Apple’s iMovie to Android, letting you combine photos and videos, trim clips, apply themes, and add text and music to your project right on the V30.

The pre-production unit I got to play with was running Android 7.1.2. It’s the latest version of Nougat and is newer than the 7.0 version that’s still on the G6. However, last year’s V20 was the first Nougat phone in the wild (it arrived even before the Pixel), so it’s a bummer that the V30 won’t be running Oreo out of the box.

UX 6.0+ has undergone quite a few visual changes—some good and some bad, but I’ll reserve judgement until LG issues the final V30 build. But the most interesting tweak is a floating bar on the screen that aims to replicate the physical second screen on the V10 and V20.

V series enthusiasts may see the floating bar as a cheap imitation, but it does well to deliver the same functionality—app shortcuts, music controls, favorite contacts—in a less-obtrusive way. Like Samsung’s Edge Panel, it hangs out on the side of the screen, and you can easily move it where you’d like or disable it all together.

There are also new biometric methods for unlocking the phone: vocal and facial recognition (though LG actually warns about their security in the settings). Vocal recognition is a cool concept, and is unique to V30: Much like with Google Assistant, you train the phone to recognize a personal wake word that will trigger the unlock.

But should you ever utter your wake word in public? What’s to stop you from unlocking someone else’s V30 by playing a simple audio recording of their wake word from another phone? So unless LG is preparing some serious security enhancements for the final release, it could be more gimmicky than legit.

Elsewhere, LG has enhanced its always-on display to show color images. And once again, the company has teamed up with Google to offer a few exclusive Assistant commands. You can ask it to record a video or open the camera in manual mode, and there are even a couple of V30-specific prompts, like recording a Cine video. They’re nifty features and work well, but the last time LG had Assistant exclusivity, it didn’t take long for Google to open it up to everyone.

LG is entering an extremely crowded market with the V30, what with the Galaxy Note 8, Essential Phone, Pixel 2, and iPhone 8 all arriving around the same time. But the V30 still checks off all the right boxes: big screen, small body, speedy chip, and loaded camera.

If anything, the V30’s success may depend on two things we don’t know: price and availability. If the price is right—and rumors say it will start at a palatable $700—it could pose a formidable challenge to the Note 8 and the Pixel 2.