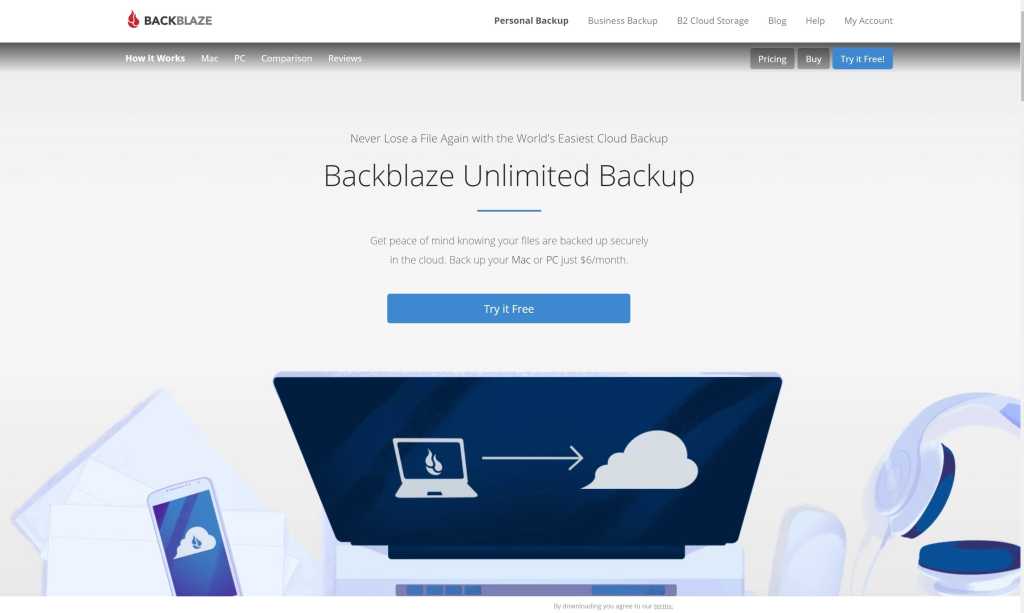 It simply doesn’t get any easier than Backblaze, which defaults to backing up everything on your PC—yes, everything. The fact that it’s cheap and offers unlimited storage doesn’t hurt, either. Other services may be more elegant or feature-laden, but Backblaze is an astonishingly good deal.

If you’re not sure what you want to back up, where it is on your device, or just want to avoid the pressure of trying to figure it all out—Backblaze is the online backup service you want. It offers unlimited storage, and backs up everything important automatically, plus everything else if you want it to. Given the unlimited storage, it’s inexpensive compared to the competition—check out all our reviews in our online backup roundup.

There’s not a whole lot to the Backblaze interface, at least if you don’t want there to be.

Because Backblaze starts at square one by backing up pretty much everything except known temporary and program files, you don’t have to fuss with it unless you want to adopt a more selective or comprehensive approach. Then you can pick and choose what you want to back up in detail. If you know what you’re doing, you might actually want to exercise the custom option to save time by not dealing with unnecessary files during backup and restore.

If and when it’s time to restore, you can of course do so via the web interface. You can restore in bulk or pick and choose only those files you need. If that’s too slow or impractical, Backblaze will also send you your data on a 256GB USB stick for $99, or an 8TB hard drive for $189. That’s twice the capacity that was provided during our last look at Backblaze four years ago. You can keep the media (those aren’t bad prices), or return the drive and get your money back if you don’t want to use it as an archive.

In the spirit of its keep-it-simple-stupid philosophy, Backblaze’s pricing is also uncomplicated: $5 a month, $60 (formerly $50) a year, or $110 (formerly $95) for two years for unlimited storage per PC. That’s not as cheap as it was during our last review four years ago, but what is? It’s still very affordable considering the lack of data restriction.

Given the amazing pricing and unlimited storage, we’re not sure how Backblaze makes money. But the company assured us it does so by using a rather unique and inexpensive “pod” storage system of its own design. Not having toured the facility, we’ll take the company at its word. But if that were to become untenable, you’ll undoubtedly have a long grace period to retrieve your data and move on.

Keep in mind that while sharing and online access to your files are provided, Backblaze is really for backup. Older versions of files are kept for 30 days, then the company assumes you’re done with them and deletes them.

Historically speaking, the easier backup is, the better chance it’ll actually get done. We know of no simpler, more foolproof online backup service than Backblaze. The fact that it’s darned cheap doesn’t hurt, either. Download it, install it, forget about it. Until you need it, at any rate. Recommended.