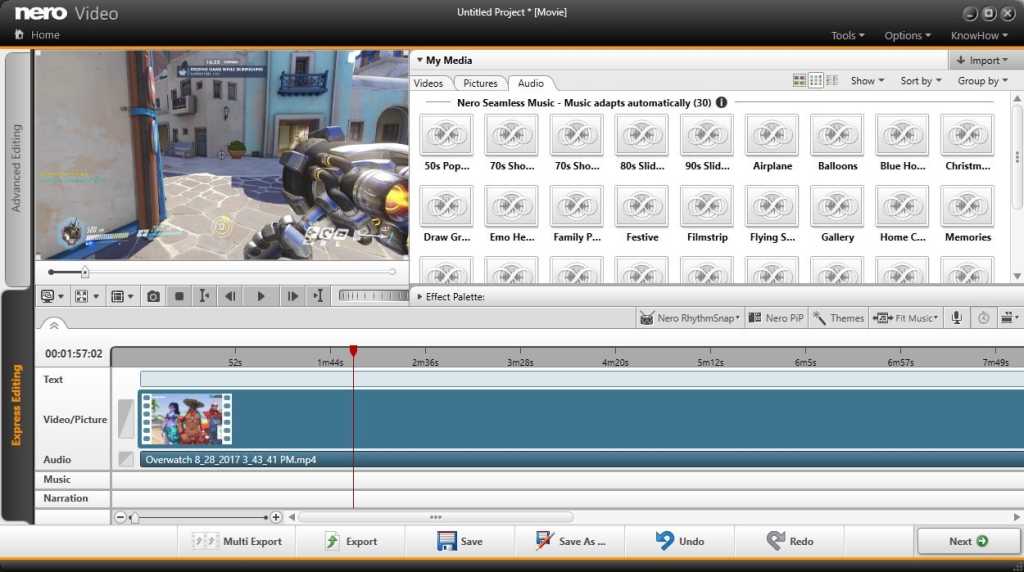 Samuel Axon/IDG
At a Glance

Nero’s video editor is as good as it gets for ripping, copying, and repackaging existing works. But if you’re more concerned with original content creation, there may be better fits out there.

Nero Video Editor may not be as well known as Nero’s DVD burning and copying software, but its video editing program walks the same path. It’s an affordable and reliable consumer video editor with a heavy emphasis on creating videos that you will export to physical media.

That means support for things like the Ultra HD standard for Blu-ray, and robust tools for building out DVD menus and functionality in addition to your standard video editing tools.

In terms of features, the editing process is quite standard. Nero Video 2017 has plenty of effects and transitions, and we were pleased to find that many of them support 4K. But the timeline-based editing doesn’t offer anything unusual over other applications. In fact, the user interface feels simultaneously simplistic and counter-intuitive. Buttons are large and clearly labeled, and most features are hidden behind a few menu clicks in both the advanced and express editing modes. However, that means you have to do some digging to learn how to do things, whereas some other apps do a better job of putting the most critical things up front.

But if you can learn its quirks, Nero offers some surprising features for such a low price. In addition to strong 4K support, you’ll find support for the H.265 HVEC video format, which is a relatively new video compression standard.

Unfortunately, Nero doesn’t offer much in the way of social publishing. It’s so specialized on physical media or high-end formats that it skimps on what most consumers would use most—Facebook video exporting. Yes, YouTube is supported, but it would be nice to see more here.

This review is part of our roundup of best video editing software. Go there for details on competing products and buying advice.

On the other hand, Nero Video 2017’s drag-and-drop importing is one of the easiest processes we’ve seen for video editors, making up for the difficulties with exporting for the web. And while Nero isn’t the only editor to do this, it’s great to see two distinct editing experiences—Express and Advanced—for different situations. They both have their applications.

Given the great media features, you might be surprised to learn that Nero doesn’t support multi-camera editing. But this just further illustrates the point that Nero’s video editor seems specialized for ripping, copying, and repackaging existing works. There’s even a tool that essentially strips commercials out of TV recordings. If that’s your main focus, Nero’s as good as it gets. But if you’re more concerned with original content creation, there may be better fits out there.