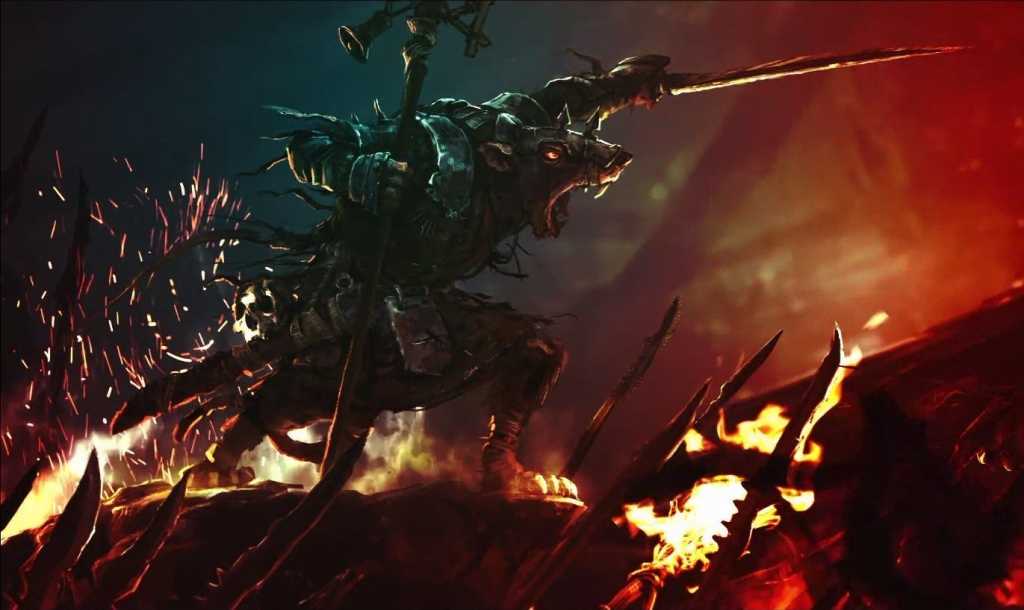 Total War: Warhammer II is a more daring take on fantasy than its predecessor, adding Lizardmen (dinosaurs) and Skaven (rat-men) to the mix—but it’s not necessarily a more daring Total War game.

“Kill the warmbloods!” The cry resounds over the battlefield, no doubt instilling fear in the hordes of rats who face me. Still they march on, pouring out of desolate ruins towards my scaly soldiers. To the left, a division of spear-wielding chameleons. To the right, a massive tyrannosaurus rex waits with opening jaws. And behind? Well, that’s where my cavalry await—dinosaurs riding other dinosaurs.

Skaven is a place on Earth

It’s been approximately a year and a half since the release of Total War: Warhammer—the first Total War game to abandon history for more fantastical fields of glory. Do I wish we’d gotten another history-centric Total War by now? Sure. But we didn’t, and instead Creative Assembly has released the second part of a planned trilogy, which for convenience sake I’m going to call Total Warhammer II from here on out.

And at the heart of Ulthuan? The Great Vortex, a magical tornado that drains magical energy from the world.

This supernatural cyclone is also the heart of Total Warhammer II. Where the previous game focused on ancient enmities—between Dwarves and Greenskins, Empire and Vampires, and so on—Warhammer II is much more focused, more immediate in its concerns. All four factions want control of the Great Vortex, whether to save the world or to corrupt it.

The Lizardmen, ancient stewards of the world, are afraid of lesser races derailing the “Great Plan” foreseen by their ancestors. They seek to protect the Vortex from warmblood interference. The High Elves fear their Dark Elf counterparts will corrupt the Vortex and bring Chaos back to the world—a plan the Dark Elves have indeed put into motion. And the ratlike Skaven? They plan to tear open the void itself.

Before I get into what I dislike, I’d like to praise the factions themselves. The first Total Warhammer was a huge departure for Total War, but not much of a departure for video games in general. Dwarves, Humans, Orcs, Vampires—the latter faction was the most interesting, but none are exactly unexplored territory. The same goes for Elves this time around—that’s well-trod territory.

Rat-men and dinosaurs, though? Fantastic. I played through the opening hours of all four factions during this review, but carried the Lizardmen campaign all the way to completion because, come on—it’s dinosaurs. In all my years of strategy games, watching a T-Rex battle against a horde of plague-spreading rats is a definite highlight.

The original Total Warhammer was tried-and-true fantasy. The sequel is much more unique, and it’s the utter strangeness of this conceit that’s made Total Warhammer II so satisfying despite the fact I think it’s the weaker of the two games.

The problem? Although the sequel’s factions are weirder, you’d never know it from the campaign itself—all four campaigns are structured the same, with only surface-level differences.

Let’s use the Lizardmen for an example. The Lizardmen start out in Lustria, a lush jungle continent. Dinosaur land. Led by Mage-Priest Mazdamundi, the Lizardmen hope to collect enough “Ancient Tablets” to fill a meter at the top of the screen. The meter is split into five sections, with each milestone triggering a Ritual—a ten-turn process where you need to defend three cities from both rival armies and the forces of Chaos who leak into the world. The fifth ritual lasts 20 turns, requires 5,000 of these Tablets, and completing it triggers the Final Battle and (if you win) the end of the game. With me so far?

My point is: Playing each campaign feels fundamentally the same. The win conditions are identical, save for faction-specific lore.

I found myself missing the first Total Warhammer, where each faction had unique (and thus interesting) win conditions. The Dwarves, for instance, were mostly in it just to take back their lands from the Greenskins. There was a story there, a history that felt important and lent the campaign weight.

Total Warhammer II’s factions still play differently. My favorite mechanic is unique to the Skaven actually. All of their cities appear to be uninhabited ruins until you try to colonize them, at which point an entire Skaven army can pop out of the ground. It adds an element of danger I really enjoyed.

As far as win conditions, though, sure, they all have different reasons for coveting the Vortex, but…well, not that different.

The Great Vortex MacGuffin-rush also changes how the campaign progresses. I praised Total Warhammer for restricting factions to certain parts of the world. You didn’t just rampage across the map, declaring war on whoever you wanted. Vampires only had designs on Empire territory, for example. This had dual effects: It grounded the conflict, made each city you captured feel important, and it also artificially limited how many cities the player had to manage.

In Total Warhammer II, generating Tablets/Scrolls/Fragments/Warpstone is mostly a factor of how many cities you own. Every city you control contributes to your total, and by the end of my Lizardmen campaign I owned something like 65 settlements, gained through some combination of military conquest and unifying other Lizardmen factions under my own banner—a necessity, because other Lizardmen factions won’t contribute to your own Ancient Tablet goals, even though you’re all sort of “on the same side.” No city is off-limits, either. Some are in an “unsuitable” climate, which carries various negative effects, but that’s it.

Once you’re past even 20 or 30 settlements, that’s a lot of micromanagement. 65 is awful. Every turn, there were a dozen or more cities demanding attention, asking me to weigh the benefits of another barracks here, another quarry there, and so on. But I needed those cities to generate Tablets as fast as my rivals. It wasn’t like I could abstain from conquest.

There’s also an odd dynamic that occurs by featuring four different continents, two of which are completely isolated by oceans. In the first game, it often felt like Dwarves could finish out a game and barely interact with the Empire/Humans—but that’s because your win conditions had next-to-nothing to do with them!

Here, you could go the entire Lizardmen campaign without ever encountering the High Elves at all, even though you’re directly embroiled in this global conflict with them. That’s a problem when those same High Elves end up being your closest rivals, in large part because their empire’s grown unchecked on the other side of the world.

Your only recourse is a bit of a cheat. Each time a Ritual is started by an enemy faction you can pay to send an “Intervention” army to opposing cities—a means of getting around your innate isolation. But you don’t even control the mercenary army you bought, nor the makeup of said army aside from a Weak/Average/Strong dynamic based on how much you paid. Thus it often feels like you’re in a vacuum, struggling to raise Tablets/Scrolls/whatever faster than an enemy you can’t even see, and then trusting the AI to throw a wrench into the enemy’s plans for you.

What, you’d rather send your own army? Crossing an ocean can take upwards of eight turns, and—even weirder—any naval battles are fought as if the two land armies were facing off against each other, and can only be auto-resolved. No tactics allowed, and no dedicated naval/ship-to-ship combat.

It feels under-baked. This grand conflict, these far-flung continents—it fits the Warhammer lore, sure, but it doesn’t hang together quite as well as a game. The threat is too abstract, mostly represented by a bar creeping ever rightward on the top of the screen, and going back to play the other campaigns doesn’t feel as satisfying when the core loop is basically the same each time. Combine that with some mechanical missteps (mostly the aforementioned focus on micromanagement and the tacked-on naval combat), and it’s just a bit disappointing. 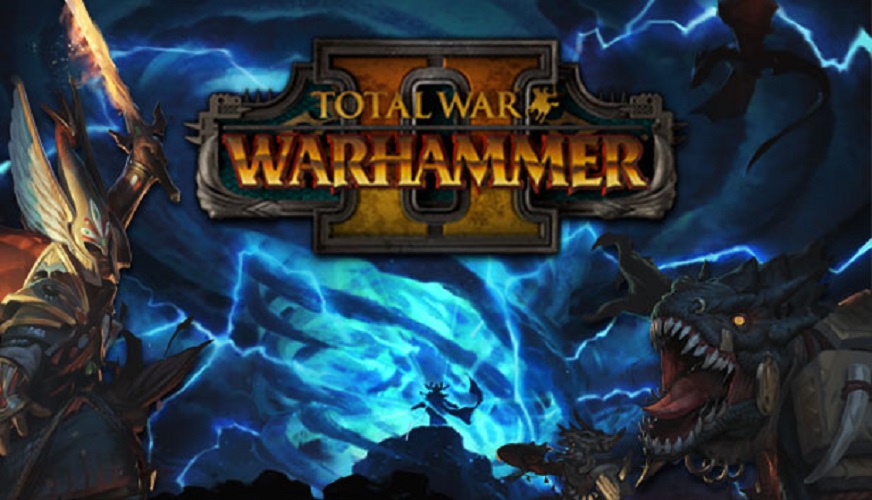 That being said: It’s disappointment in relation to the first game, which was stellar. I don’t think Total Warhammer II is bad, per se, and definitely enjoyed the presence of the Lizardmen and Skaven factions. Give me more of that in the inevitable Warhammer III actually, by which I mean get weirder. Unbound by the chains of human history, Creative Assembly can finally be truly creative. I love it. I’m also curious to see what new factions add to the conflict—whether they too are embroiled in conflict over the Great Vortex and how it changes the dynamic.

I’d like to see more of what worked in the first Total Warhammer, though. Less world-spanning disaster, more localized enmities and backroom politicking. I don’t just want factions to play differently in pursuit of the same goal—I want them to be different. That’s undoubtedly a hard trick to pull off, especially when it comes to balancing strengths and weaknesses, but I think it made Total Warhammer a much stronger game than this more traditional sequel.