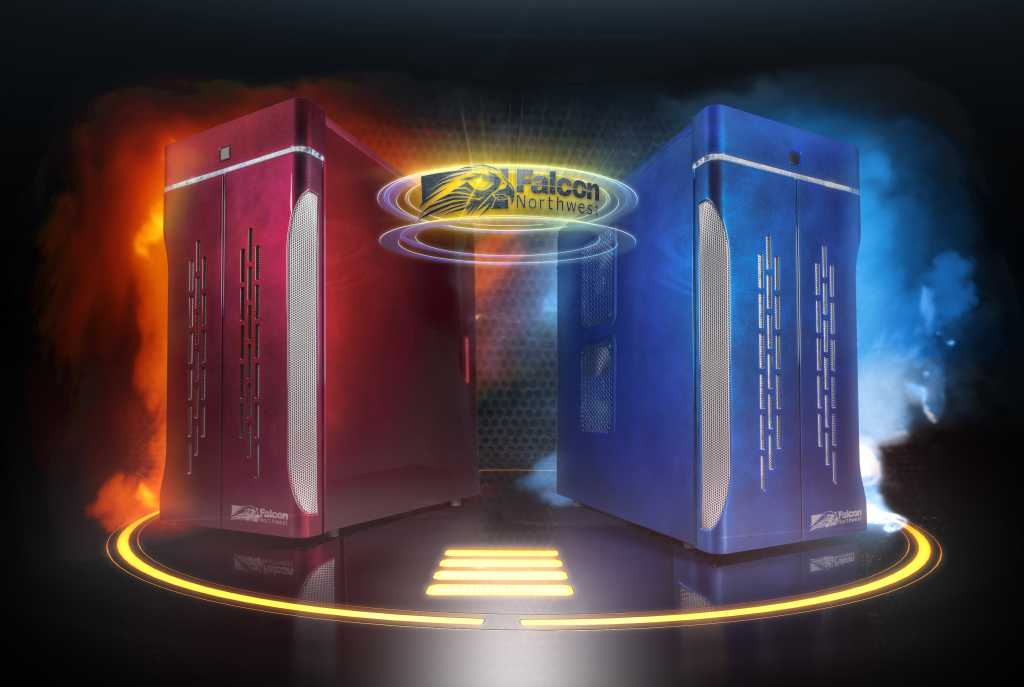 Who makes the best 16-core CPU? Now that AMD has its 16-core Ryzen Threadripper 1950X and Intel has its 16-core Core i9-7960X, we had a chance to find out when boutique custom PC builder Falcon Northwest built a pair of nearly-identical rigs that could truly go head to head.

As Falcon Northwest is famous for, both Talon systems are over-the-top in specs and chassis. Each came equipped with:

Both feature the same 1,000-watt EVGA Super Nova G3 PSU and the same custom closed-loop cooler system. The number and type of system fans are the same as well.

Although both have the same storage subsystem, there is a slight variance. The pair of Samsung 960 Pro NVMe SSDs in the Intel system are configured as PCIe devices in RAID 0, while the AMD box keeps both Samsung 960 Pro drives as separate drives.

We settled for this variance so as not to hobble the Intel box. After all, at the time we requested the machines in early September, RAID 0 using NVMe drives was available only on the Intel platform (not VROC, but using the X299 chipset) not on AMD’s X399. Since then, AMD has introduced support for NVMe RAID.

We matched carefully in most other areas.  Both CPUs are kept bone stock. At the time of our story, Falcon had qualified 128GB of RAM up to DDR4/3000 speeds for the Intel system, while the highest-clocked RAM on the Threadripper system when using 8 DIMMS was DDR4/2400. We decided to keep both machines at DDR4/2400 to match in price as well as capability.

First up is Maxon’s Cinebench R15 test. It’s a free benchmark based on the rendering engine Maxon uses in its professional Cinema4D app. It’s highly multi-threaded and almost entirely a CPU-focused test (though there is a graphics test, too).

The default mode is to test all of the cores at once. The Core i9 squeaks by the Threadripper box by a few percentage points.

Cinebench R15 also allows you to tweak the number of threads to test, so we ran it on only a single core. This is where Intel has had an advantage over Zen-based chips, and it shows with the Core i9’s 15-percent lead on single-threaded tasks. We’ll dive into just where Intel gets this advantage later, but anyone who thinks this isn’t a big win for the 16-core Core i9 is in denial.

The Persistence of Vision Raytracer is an app that literally goes back to the days of the Commodore Amiga. Obviously converted to run on modern hardware, the free ray tracer loves CPU cores and threads.  As we saw with Cinebench, the Core i9 has a slight edge in performance.

Blender is an open-source 3D modeler that sees a lot of use by independent movie makers for effects sequences. Even NASA uses Blender these days to produce 3D models.

Blender was also the benchmark of choice AMD used when it first unveiled its Zen CPU last year. So who leads the way here? In the chart below (showing Blender using the BMW benchmark), lower scores are better in rendering, and the Core i9 has a double-digit lead over the Threadripper part. Ouch.

Corona Renderer was first introduced with AMD’s Threadripper, and it was used to soundly trounce Intel’s 10-core Core i9-7900X chip because 16 > 10. When it’s 16-on-16, though, things go a little sideways. Where Cinebench and POV-Ray put the two CPUs fairly close, Corona Renderer 1.3 puts the Threadripper about 19 percent slower than the Core i9. Ouch again.

Benchmarks can be easily become political footballs, with one side’s fans claiming a test is cooked to favor the other. Let’s remind everyone that it was AMD who recommended the Corona Renderer test.

Moving on to a compression test, we use the popular and free 7-Zip to measure how fast each machine is at handling file compression. Using the internal benchmark, the Core i9 is about 9 percent faster.

7-Zip also features a single-threaded test, the results of which are no surprise: The Core i9 comes out about 21 percent faster than the Threadripper part. Again, this is likely due to the clock speed advantage of the Intel chip over its AMD counterpart.

For encoding, we ran our standard test, which tasks the free Handbrake encoder with converting a 30GB 1080p MKV file using the Android Tablet preset. Like most encoders, Handbrake favors having more cores, and we see the two chips in the same neighborhood at least. The Core i9 still comes out ahead by 8 percent, but at least it isn’t the blowout we saw in Corona or Blender.

Yes, yes, but how do they game? Keep reading to find out.

We don’t typically consider a 16-core Core i9 or 16-core Threadripper chip as CPUs for gamers, but in reality, a lot of people with high-end hardware play games. Given that both rigs are configured with a pair of Titan Xp cards, we simply have to test these machines in gaming.

Note that we ran the Threadripper using the latest version of Ryzen Master in Game Mode and in Creator Mode (which you can read about here in our original review of Threadripper.) The best score for each test was reported.

First up is Futuremark’s 3DMark Time Spy test. It’s the company’s latest DirectX12 benchmark. Because we care only about CPU performance, we’re reporting only the CPU subscore. Cleary, the test likes Core i9 more.

Futuremark has been hard at work creating an Extreme version of its new DirectX12 benchmark. Luckily, we had it in time to run on our pair of Falcon PCs.

The overall score itself was basically a tie, with the Core i9 box hitting 8,864 and the Threadripper box scoring 8,630. If you dig into the sub-score focusing on the CPU, though, the Core i9 again has a performance edge by about 20 percent. Why? That’s hard to say. It’s unlikely this is all a clock speed advantage.

The next step is to see how this translates into real games at real resolutions. We ran several off-the-shelf games on their highest visual quality settings at 4K resolution. There’s no 1920×1080 at Medium nonsense here: It’s all about playing with the pair of Titan Xp cards maxed out.

As we noted previously, we ran the tests in both Game Mode and Creator Mode on the Threadripper system, and we used the highest score obtained in either mode. For Middle-earth: Shadow of Mordor, though, it didn’t matter. Both of Threadripper’s modes produced the same performance. And yes, for the most part, even with a pair of Titan Xp cards in SLI, both Falcon machines are tied.

Our next test was Rise of the Tomb Raider. AMD made much hay of Rise of the Tomb Raider’s patch, which helped close Ryzen’s performance gap compared to Intel chips. The problem, AMD said, was old code that just didn’t know how to deal with Threadripper. For our tests, we ran at 4K resolution on the Very High preset and in DirectX 12 mode. Threadripper is a frame or so faster, but for most part—it’s a tie.

Deus Ex: Mankind Divided is another test that AMD really loved when Ryzen 7 first shipped because, well, it runs pretty well on AMD CPUs. For our test, we ran Mankind Divided on the Ultra setting and 4K resolution.

The result from a gaming perspective is disappointing, as both machines could barely reach 60 fps even with two Titan Xp GPUs and high-end CPUs. More importantly, the Core i9 has a slight edge in frame rate. The performance of Threadripper was the same between Game Mode and Creator Mode.

So far the balance in gaming has been a tie or in favor of Intel, but that flips once we get to Tom Clancy’s Rainbow Six Siege, which we ran at 4K resolution and on the Ultra quality setting. The Threadripper Talon system comes out on top by a very decent amount. Its score was achieved with it set to Game Mode, but when set to Creator Mode, it wasn’t that far off.

Ashes of the Singularity: Escalation performance

Our last  gaming test is Stardock’s Ashes of the Singularity: Escalation. We ran the test at 4K using the Crazy preset and the CPU Focused setting to test the CPU, rather than in the GPU Focused mode.

We usually shy away from power consumption comparisons because they can be blown out of proportion. In a desktop PC with multiple drives and a graphics card, the CPU isn’t the power hog, it’s the graphic card. The second reason is the difficulty measuring power consumption between different systems. But hey, here we are with nearly duplicate systems, so we plugged the Northwest Talon PCs into Watts Up Pro meters and measured the total power consumption under different CPU-only loads.

Using Cinebench R15 to push the systems from 1 thread to 32 threads, it was clear which CPU was the winner. What’s also interesting is to see how Threadripper’s power consumption levels off once it hits about a 16-thread load. Core i9 just continues to ramp up power consumption as you increase the load. And mind you—this is stock clocked. Vendors have told us they’ve seen Core i9 consume more than 500 watts under heavy overclocking.

One question many people have asked is just where Core i9 gets all of its performance. For the most part, Core i9 is a modified Skylake core, which means that in Instructions Per Cycle, it’s not that far ahead of the cores in the Threadripper chip. The main difference is likely its clock advantage. We again took Cinebench R15 and varied the workload from 1 thread to 32 threads, recording the clock speeds using the respective Intel or AMD utilities (XTU and Ryzen Master).

The chart below shows the Core i9 with a minimum of 200MHz clock speed advantage on loads up to 13 threads or so. Beyond that, Threadripper actually has the advantage by about 100MHz.

To see how that clock speed advantage plays out, we again use Cinebench R15 to vary the workload from 1T to 32T and record the final score. Core i9 leads the way the entire time.

The bang for buck stops here

The chart below shows the performance advantage the 10-core Core i9-7900X has at the low end, but once you cross over to about 10 threads, Threadripper’s 16 cores takes over and you’re looking at up to a 31-percent performance deficit for that Core i9 chip.

One last thing to consider is that the price of just the CPU isn’t everything. When it’s watered down by the total cost of the system, it may indeed be worth it for some. For example, the Falcon Northwest Talon systems that we used were both dream configurations with $2,400 in GPUs, maybe $1,800 in RAM and $1,200 in SSDs. That doesn’t count the motherboard, hard drive, cooling, case, power supply or custom hand-paint jobs. When you’re building a box in this range, the price difference in the CPU isn’t that much. Of course, not everyone buys loaded machines like the Falcons. If your machine budget is closer to $3,500, then the $700 you save on a Threadripper represents a much larger part of the budget.

Looked at in a core-vs.-core battle without considering price, Intel’s Core i9-7960X leads the way. It gives you great performance at light-duty applications and generally can’t be touched by the Threadripper 1950X in heavy-duty applications, either. In a lot of the tests we ran, we were actually surprised Core i9 ran away from Threadripper so easily.

That said, it’s pretty hard to ignore price when you’re spending your own money on a build. Our opinion hasn’t changed for Threadripper: It is absolutely the best $1,000 CPU you can get, a spectacular deal. But price aside, in a 16-vs.-16 battle, Core i9 is the winner.