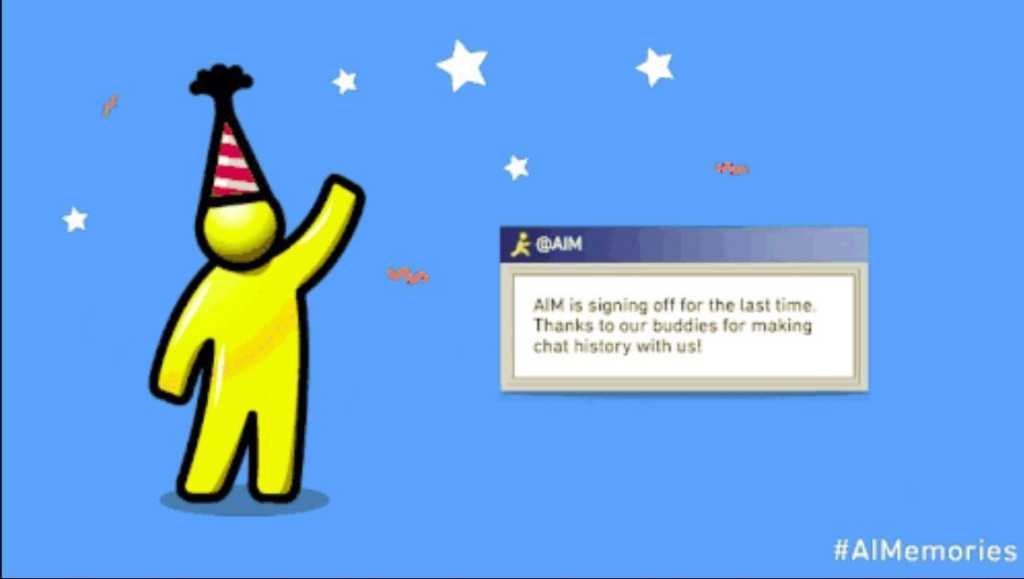 It’s the end of an era that realistically ended a decade ago. On Friday, AOL shut down AOL Instant Messenger (AIM) permanently. Plans for its death were first announced in October.

When I heard the news, my mind flashed back to the boxes full of America Online CDs in every store, to the dubstep-like beeps and boops of a 28.8K modem connecting to the Internet, and AIM chat rooms providing a real-time connection with people around the world long before social networks accomplished the same task.

But the rise of social networks like Facebook and Whatsapp were the final nail in AIM’s coffin. The company acknowledges that the times aren’t just a-changing now that we’re in the smartphone era—they’ve already been altered forever. “AIM tapped into new digital technologies and ignited a cultural shift, but the way in which we communicate with each other has profoundly changed,” wrote Michael Albers, VP of communications at Oath (the Verizon brand that gobbled up AOL).

[ Further reading: Best Android phones 2017: What should you buy? ]

AOL discontinued active AIM development in 2012, and cut off third-party apps (like Adium, Trillian, and Pidgin) earlier this year. And AOL Instant Messenger isn’t the only turn of the century vanguard to fall on hard times; Microsoft shut down MSN Messenger in 2014, while Yahoo Messenger closed up shop last year.

An AOL help page says you’ll continue to have access to your @aim.com email address, but there was no way to save or export your AIM buddy list for posterity. That era is really, truly dead.

So pour one out for AIM. Who could’ve guessed that AOL’s dial-up Internet business would outlast the one-time chat giant? If you’re looking for an all-encompassing AIM alternative, this handy Chrome extension lets you access Whatsapp, Facebook Messenger, Skype, Slack, Google Hangouts, Discord, Steam chat and more from a single window.

Editor’s note: This article was originally published on October 6, 2017 when the shutdown was announced, and updated when it actually happened.