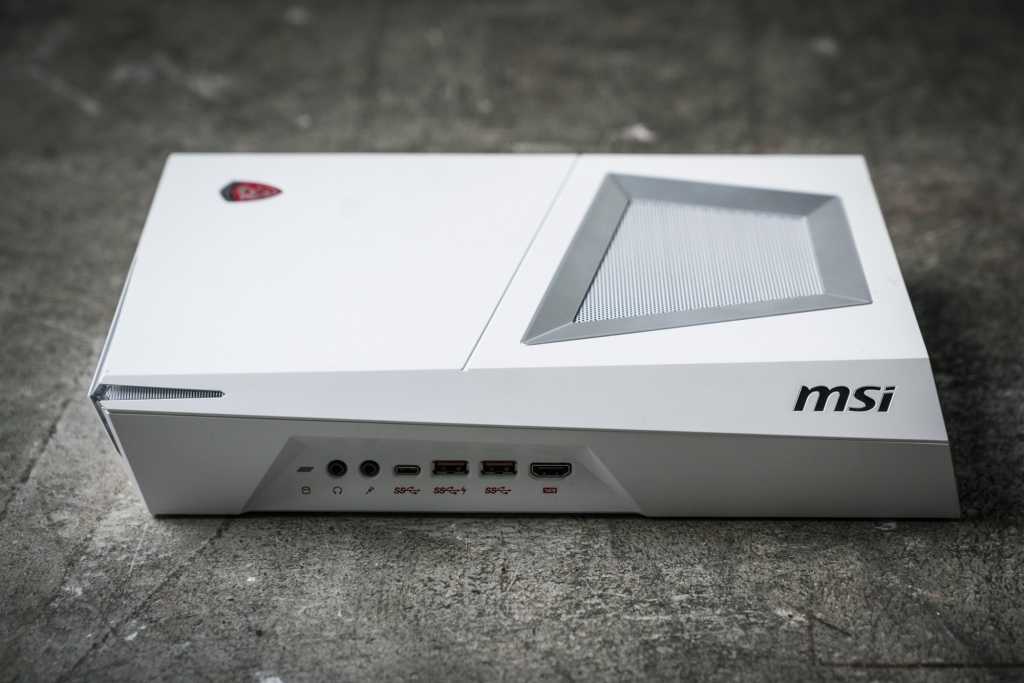 The MSI Trident V3 is quiet, easily upgraded, and packs a GTX 1070 inside a chassis the size of the Xbox One X. Pretty incredible.

Smaller form-factor PCs typically go one of two ways: First, you can prioritize the small part of the equation. This leaves you with something beautifully tiny, but at the cost of future upgrades—space-saving comes with the caveat of proprietary and non-replaceable parts. (See: Alienware Alpha.) Or you can prioritize future upgrades, which typically means a larger and less aesthetically pleasing machine.

The MSI Trident 3 is the rare machine that can do both—at least to some extent.

It really is tiny. Scale can be tough to judge in photographs, but at 13.6 by 9.2 by 2.8 inches, the Trident is so small it’s hard to believe there’s a full-size PC inside. It’s smaller than my launch-version Xbox One for instance, and quite nearly smaller than the new Xbox One X. (It’s smaller depth, but the Trident is about an inch longer and maybe half an inch taller.) The Trident sits comfortably in “console-sized” territory, in any case.

And it seems even smaller than it is. The Xbox One’s blunt VCR-like chassis looks every inch its size. The Trident’s canted angles are needlessly flashy perhaps, but also slimming.

Speaking of flashy: I could do without the RGB lighting. That’s the one aspect I think detracts from the design, if only because it’s distracting. Given the small size of the Trident I assume most people will place it on something, be it a media center shelf, a desk, whatever. Having an RGB-lit “Y” shape on the front panel ensures the Trident won’t simply blend into the background, instead blink-blink-blinking away at you all night long.

It won’t bother everyone, and it’s also customizable—you can hop into MSI’s settings panel and turn the lighting off, “solving” the problem. There’s just not much point to it being there at all on a machine seemingly so suited for living room use, though.

I love the choice of white for the chassis, though. Most of MSI’s Trident models come in the company’s standard black-and-red color scheme—as “generic gaming machine” as you can get. The model we looked at comes in “Arctic White” though, with a red MSI badge and red labels on the front ports. It’s slick. I tend to prefer black boxes—I feel they hold up better over time—but there’s no denying that fresh out of the box the white Trident is an eye-catcher. Bonus: Less noticeable dust.

The front panel is laden with ports, which also behooves living room use. Most noteworthy is a front-facing HDMI port, which MSI intends for easy VR usage. I haven’t had much reason to use my HTC Vive with the Trident, but I appreciate the gesture. At the moment, plugging in a VR headset means crawling behind my tower PC. Front-facing I/O is certainly more convenient.

You’ll also find 3.5mm headphone and microphone ports on the front, plus one USB-C and two USB 3.1 jacks. And despite the machine’s small size, the rear also features a surprising number of ports—two more HDMI ports on the motherboard itself, five USB ports, gigabit Ethernet, power, Line-In, Line-Out/headphones, and microphone. Then there’s the graphics card, which features an additional two HDMI ports (for a total of five on the machine), two DisplayPorts, and one DVI.

Wrapping up the design, I’ll note that the Trident also comes with a stand, allowing you to run the machine vertically. This is the weakest part of the package though, with the stand apparently more concerned with aesthetics than keeping your PC intact. The stand neither snaps onto the machine nor screws into it, relying instead on the Trident’s weight and four tiny rubber pads to keep it upright. If you plan to toss the Trident onto a shelf? It might be enough. But if you have an unstable desk, pets, children, or are maybe just clumsy? I wouldn’t recommend running it vertical. Even a moderate nudge could send it teetering and (if you’re unlucky) toppling over.

Okay, so it’s console-sized. Now how does it stack up? And the answer: Pretty damn good. Actually, the Trident we looked at was loaded, for a machine this small.

Most Trident setups run with an Nvidia GeForce GTX 1060, which is a perfectly serviceable card. (Actually, that puts it about on par with the Xbox One X.) The $1,450 model we looked at though takes the next step, somehow packing an 8GB GTX 1070, plus an Intel Core i7-7700 clocked at 3.6 GHz, 16GB of DDR4 RAM, and both a 256GB SSD and a 1TB hard drive. Again, that’s into a machine smaller than the original Xbox One.

It’s incredible. Sure, you’re not going to get the same performance as a full tower with a GTX 1080 Ti inside, but in a machine this size? Wow. As I said, even the Xbox One X tops out at GTX 1060 levels of power, which makes the Trident V3 more powerful than even the most powerful console on the market today. We ran the Trident through our usual battery of benchmarks, with impressive results—impressive if only because something this small put up scores similar to full-sized towers.

The Trident 3 even holds its own in lengthier benchmarks. That’s impressive. In-game benchmarks are usually only a few minutes long at best, so you don’t really see thermal throttling because the hardware doesn’t heat up enough for it to matter. But in one of 3DMark’s lengthier tests or our CPU-centric Handbrake encode you sometimes see heat dispersion problems you might’ve otherwise overlooked.

Not here. In 3DMark’s FireStrike Extreme test the Trident put up a score of 7828, which compares favorably to the Gigabyte machine’s 8313. And in our Handbrake test, where we transcode a 30GB MKV file down to the Android Tablet preset, the Trident 3 did it in about 38 minutes and 46 seconds—only 16 seconds longer than the Gigabyte. All evidence points to there being no significant thermal issues. The machine gets hot for sure, but as far as I can tell it’s not significantly affecting performance.

“Okay, so then noise is an issue right? If it’s moving that much heat, obviously the fans must be distracting.” Nope! Surprisingly it’s both relatively cool and quiet. Not whisper-silent, to be sure, but at even moderate volumes my sound system drowned out the Trident’s fans—and that was with it on my desk. If you placed it across the room, you’d probably never hear it. It’s certainly quieter than 2013’s Xbox One model, and about on par with the new Xbox One X.

But the most important aspect of the Trident 3: It’s not only small, but upgradeable. Properly upgradeable, mostly thanks to the aforementioned GTX 1070. See, most Trident models ship with a GTX 1060—a low-power card. As such, they get away with running on a 230 watt power brick.

That’s fine, as long as you only ever plan to replace the 1060 with an equivalent card, but even upgrading to a 1070 would likely cause problems under load with that diminutive a power supply.

Since our model ships with a 1070 though, it also packs a 330 watt supply. That’s not much more than the baseline Trident, and it still comes in ugly power brick form so you’ll have to find some extra room to stash it, but you might have a bit of headroom for overclocking if you’re careful. The GPU is also easily accessed, and can be swapped out for any other small form-factor card as long as you keep the power restrictions in mind. Three or four years down the line you should be able to plop in a GTX 1470 or whatever and be good to go.

The GPU isn’t the only part that’s upgradeable though. Two screws gets you into the case, which is enough to replace the RAM immediately. The CPU would take more doing, but you can dismantle the cooling system and swap it out if desired. That would only be in the event of complete failure though—the motherboard is proprietary, and given Intel’s fondness for switching CPU sockets lately you’re probably not going to be able to drop in a new-generation processor later.

I only have a couple complaints. Accessing the hard drives is a royal pain, requiring you to flip the machine over and remove the entire bottom panel. It’d be easier to just use an external drive I guess, but it’s annoying given the Trident’s 1TB drive. First thing I’d want to do is upgrade that, and it’s harder than it needs to be. More annoyingly, you void your warranty by tinkering. That’s not too uncommon with prebuilts, but there is indeed a sticker over one of the screws as you head inside.

If you want to really tinker? Sure, get a full tower or build your own. Still, if you want a small machine that remains a decent investment three or four years down the line? The Trident 3 gives you enough runway to upgrade the most important components a few times, and replace the most likely points of failure too. That’s better than a lot of machines its size (not to mention gaming consoles).

The MSI Trident 3 Arctic offers the power of an upper-mid tier PC in a chassis the size of the new Xbox One X—and with the ability to upgrade it even further in a few years with a hypothetical GTX 1470 or whatever. It’s attractive, it’s small, it’s (mostly) discreet, and it’s also surprisingly inexpensive. The 1070-equipped model we looked at retails for a mere $1,450 on Amazon. Doing some rough back-of-napkin math, I estimate you’d only save maybe $200 or $300 on a bare bones Mini-ITX build of your own, and while you’d gain some additional room for upgrades later it definitely wouldn’t turn out this sleek, nor manage heat this efficiently.

Whether you’re looking for a living room machine, a dorm-room PC, or something convenient to take to those LAN parties you and your friends are still (in 2017!) having, the Trident 3 is definitely worth a look—specifically this GTX 1070 model. The 1060 units? Eh, I’d probably give those a pass. But this is one hell of a deal.