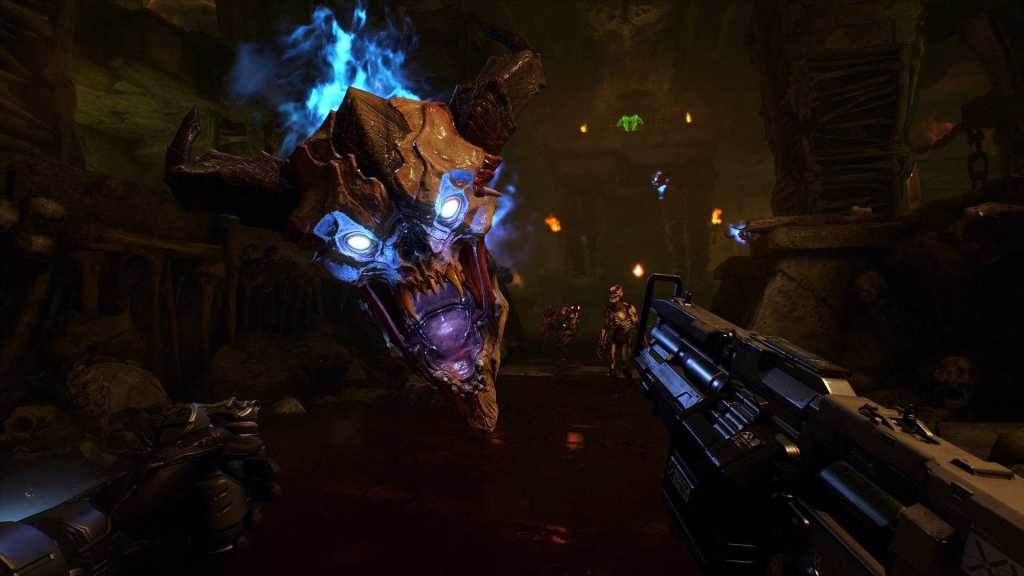 The core of Doom VFR—the fast-paced movement, the shooting, the teleport-inside-a-demon-so-it-explodes—can be fun, but it’s missing the small details that make VR interesting.

It’s been a sleepy fall for virtual reality, but we were promised one hell of a capstone: Not one but three Bethesda titles, reworked for the HTC Vive. First Doom VFR, then Fallout 4 VR, and then Skyrim VR sometime in 2018. (That last one is also available for PlayStation VR right this moment.)

Of the three, Doom VFR was the one that excited me most. Fallout 4 is…well, just okay. Skyrim is better, but also six years old and exists on seemingly every platform ever made.

But Doom? Doom was one of 2016’s best shooters, an incredible rework of the classic shooter. Bethesda squandered Doom’s post-launch support on multiplayer nonsense nobody wanted, and it was a shame because I would’ve paid quite a bit for some more singleplayer action—and here it was. In virtual reality.

So I was pretty excited as I launched Doom VFR this weekend. I’d played a short demo at a Bethesda event a few months ago, and while I found it all a bit confusing at the time I figured an hour or two with the game would get me better acquainted.

I was immediately taken aback by the fact that my character speaks though. Constantly. Given the in media res opening of Doom’s 2016 flat-screen version, and the merciful silence of the player character, it was more than a bit distracting to hear the world’s blandest everyman voice come out of my “mouth” here.

That in mind, your character here isn’t given much to work with. “The last actuator is embedded in that Cyberdemon” is almost word-for-word a line from Doom VFR, uttered with almost zero sense of irony or wink-wink-hey-we-know-this-is-dumb to the audience. I quickly found myself just tuning this player-narrator out, because none of what he had to say was very interesting. It was basically just set-up for whatever arena came next, many of which are tied to locations reused from the original game (like Samuel’s office).

He’s all you get though. Doom VFR is weirdly empty apart from his ramblings. I came across a few computers that seemed like they had supplemental text files and audio logs I should be able to listen to, but if that is possible I couldn’t figure out how to activate them.

Which I guess brings us to the most important part of this review: Controls. Doom VFR uses a pretty unique system that I actually kind-of enjoyed. Given that it’s a fast-paced (the fastest paced) shooter, pure teleportation would feel sluggish. The Vive wands don’t have analog sticks though, and thus aren’t well-equipped for smooth movement either.

Doom VFR ’s hybrid system then combines the two. Hold down the center of the left-hand pad, you’ll teleport wherever you aim, be it up, down, or on the same level. Tap one of the edges and you’ll do a short dash in any direction.

The system’s not perfect—for instance, holding down an edge still results in a dash, not the teleport you’d expect. You’d better get good at thumb placement. But it’s a decent solution for Doom VFR’s speed. Plus, it allows for the return of Doom 2016’s Glory Kill system. There, a weakened enemy could be punched to death to increase ammo and health drops. Here, you simply teleport inside an enemy (id calls it “telefragging”), exploding them in a pile of gibs. It’s badass.

Feeling around in the dark

That said, there are so many other missteps that sandbag Doom VFR. Guns are a big one, for multiple reasons. Weapons lack the punch you’d expect from Doom, with even the famed shotgun feeling anemic. There’s also a fun power fantasy here, with you wielding assault rifles and rocket launchers and so on one-handed, but the result is an awkward firing angle where it’s almost impossible to look down the sights or aim in any meaningful way.

Not that it would matter if you could—apparently to compensate for the lack of recoil, the devs at id put a random spread pattern on most fast-firing guns. Get ready to aim directly at an imp’s head, pull the trigger six times, and see rounds fire six different angles. Oh, and there’s no collision on guns that I can tell, so many times I whipped out my shotgun in close quarters situations only to fire through an enemy, both barrels unloading harmlessly behind its head and into a wall or whatever. That’s a make-or-break problem on occasion, and resulted in more than a few unfair deaths.

Other oddities: You can’t grab (or punch) any object directly. Game asks you to pick up a keycard? You aim your laser-pointer index finger at it and it teleports into your hand. Need to interact with a computer? Laser pointer finger. Grab a gun out of the corner? You’ve got it—magic laser pointer finger.

I imagine this was a compromise we can lay at the feet of PlayStation VR. Apparently that version has three different control schemes to cover the Move, Aim, and DualShock controllers. It never ceased to baffle me though. I kept reaching out to touch things to no avail.

Note: Many people are reporting crashes on Steam. I didn’t run into that issue, but Doom VFR is incredibly demanding even on my GeForce GTX 980 Ti, and frequently dropped frames while loading in assets (resulting in Steam being visible for a brief period as the Vive tried to mitigate any discomfort). I also had some flickering texture issues. Hopefully the optimization end can be smoothed out in the coming weeks.

There’s also a bizarre lack of physics objects, given that most VR devs cram them into every corner like Half-Life 2 on steroids. A notable example: In the second or third mission you’ll pass a desk with a Newton’s cradle conspicuously on top. I reached out to touch it and set the balls swinging back and forth and…nothing. As far as I could tell it’s just a static prop, entirely decorative.

Why? Why would you put a Newton’s cradle, literally an object that exists purely to show off physics, into your game and then not let players mess with it?

It’s funny—everyone wanted bigger publishers to get involved with VR. And I suspect Fallout 4 VR and Skyrim VR will be somewhat more impressive, if only because the scope is so much larger than anything we currently have on the platform. Two 60-plus hour RPGs? VR might not be the optimal way to play those, but it’s certainly an impressive showpiece.

But when it comes to Doom VFR, it’s hard not to look at this and think “Okay, well smaller developers have done this, and better.” Not the speed, maybe—that really is Doom VFR’s most interesting quality, dashing around arenas at superhuman speed, hitting a cacodemon in the face with a shotgun blast, pivoting to telefrag a staggered imp, tossing a grenade and then teleporting back out to a safe distance. It’s fast.

It feels like other games have solved a lot of Doom VFR’s problems though. Other games have better guns, better environments and environment-based storytelling, more creative arenas, better controls. Even Doom’s menus feel weird—I’ve never ever seen a game map “Accept” to the right trigger and “Back” to the left trigger. Ever. On any platform. Ever.

We’re nearly two years into VR as a consumer product and while many aspects still feel like ongoing experiments, developers have nailed down some of the fundamentals as far as building an interactive and believable world. I poke fun at physics objects above, but that’s a big part of it—the point is removing barriers between player and game so they forget they’re in VR, that it’s all fake, even if only for a second.

And part of that is when you reach out and touch something, it reacts the way you expect.

It sounds small, but it’s those minor details (or lack thereof) that leave Doom VFR feeling lackluster even though the core of it—the shooting, the speed, the teleport-inside-a-demon-and-it-explodes—is pretty decent.

Why? Because those small details are what make VR worthwhile. Nobody’s like “I want to wear this stupid headset to play a shooter I could play on a normal monitor.” People do it because for some small amount of time they feel like they’ve entered another world entirely. They forget they’re wearing the stupid helmet, forget they’re standing in their living room waving their arms about like one of those floppy noodle-creatures outside the car dealership. Those moments are rare. They’re also incredible, and the hallmark of a great VR experience.

Doom VFR doesn’t get there. Kudos to Bethesda for retooling Doom for VR from the ground up instead of doing a lazy one-to-one port like certain other developers, but it doesn’t feel like it takes advantage of the new platform like you’d hope. Certainly not as well as other shooters like Arizona Sunshine and Robo Recall.

Though it did give me a new appreciation for how damned huge Cacodemons actually are. Really huge.