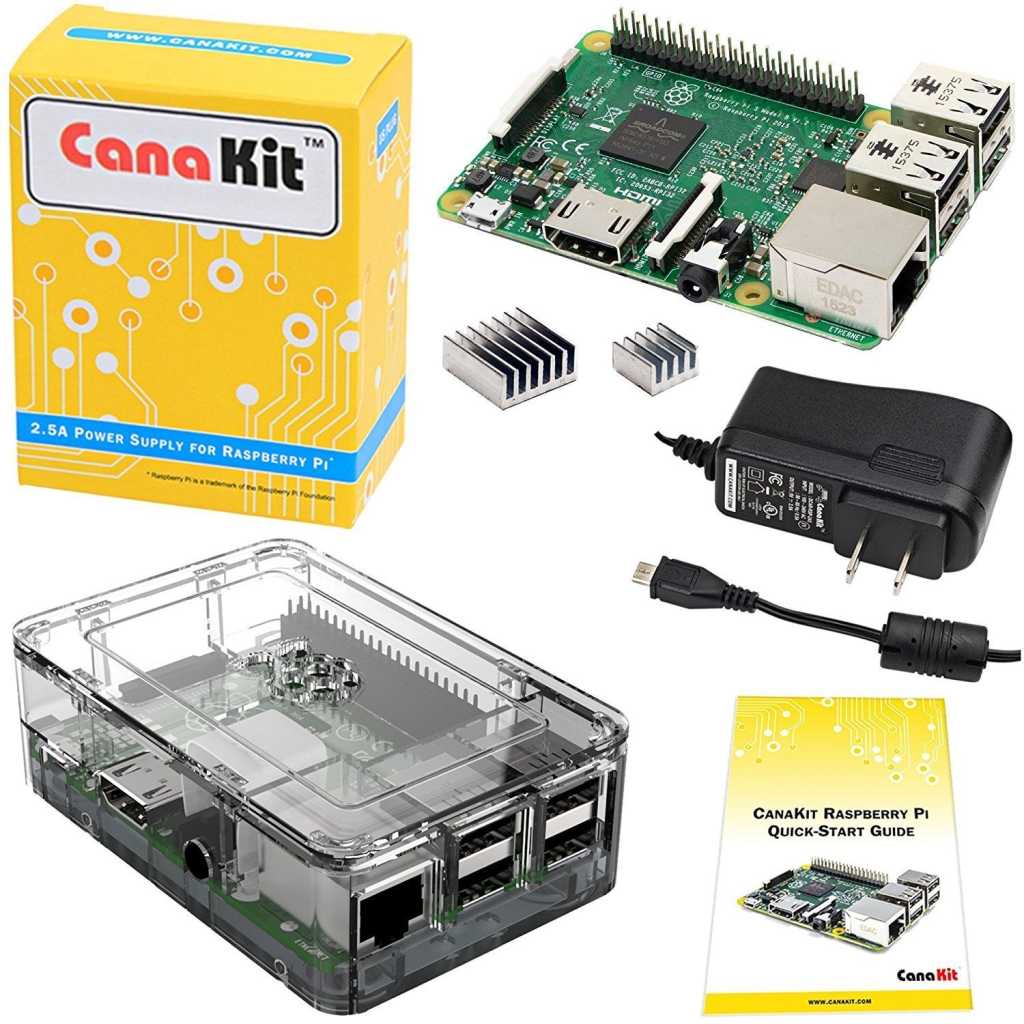 The Raspberry Pi is an incredibly flexible little computer. These days even more so thanks to the introduction of the Raspberry Pi 4 with its multiple RAM options. You can use this miniature PC for a wide range of projects, from the pragmatic to the innovative to the nostalgic—the same hardware can power a retro gaming setup as readily as an ad-blocking server. But if you’ve never handled a circuit board in your life, getting started with a Raspberry Pi may seem intimidating.

We’ve sifted through the options to find the best Raspberry Pi kits on the market. Our top picks include something for everyone, whether you want to build a simple secondary PC or dive right into advanced maker-style projects.

If you want to create a sweet little desktop PC in your first foray with the Raspberry Pi take a look at the Starter Max bundle from CanaKitRemove non-product link. This kit has a Raspberry Pi 4 with 4GB of RAM, a USB-C power supply, a high gloss white Pi 4 case, three aluminum heat sinks, a cooling fan, two micro HDMI to HDMI cables for dual-display support, a 64GB microSD card pre-loaded with the NOOBS operating system installer, the PiSwitch to turn the RPi on and off at the touch of a button, and a quick-start guide.

The Pi 3 bundle has a charger, case, PiSwitch, and two heat sinks.

To get up and running, you’ll need to add a microSD card, keyboard, and mouse.

CanaKit’s Complete Starter Kit is a healthy step up from the basic starter pack, but a downgrade from the Max kit we listed above. The Pi 4 versionRemove non-product link has the Raspbery Pi 4 with 2GB of RAM, a 32GB microSD with NOOBS, a case, power adapter, three heat sinks, PiSwitch, and HDMI cable. The Pi 3 versionRemove non-product link has a Pi 3 Model B, and the rest of the bundle is the same as the Pi 4 version minus one heat sink.

One of our favorite uses for the Raspberry Pi is as a classic gaming console. If you don’t want to scour Amazon and other retailers for the materials you need, this gaming kit from Pi HutRemove non-product link puts it all together for you in one place.

In addition to the Raspberry Pi 4 with 4GB of RAM and accompanying case, you get two Super NES-like game pads, a blank microSD card, power supply, and a micro HDMI to HDMI cable.

The retailer can’t supply the operating system or video game ROMs, so you’ll have to download all of that stuff on your own. If you aren’t sure how to get started, we’ve got a handy tutorial on how to build your own Pi-based retro gaming console.

The Raspberry Pi Kit for DummiesRemove non-product link is great for anyone who wants to get into the hardware hacking craze. It includes a Raspberry Pi for Dummies booklet, which serves as a primer for working with the Raspberry Pi and starting your own projects.

Similar to Intel’s Windows-based NUC kits, the Pi DesktopRemove non-product link is a big square box that comes with an add-on board that connects to the Raspberry Pi via its GPIO pins. There’s also a variety of PC-like innards including an mSATA interface, power controller, system clock, and heat sink.

All you need to bring is a Raspberry Pi 3 board (it doesn’t work with the Raspberry Pi 4), an SSD up to 1TB capacity, and a DIY can-do attitude. In no time you’ll be up and running with your own snazzy-looking Raspberry Pi desktop PC.

Retailer: Adafruit Price: $300 Board included: No

If you find yourself wishing your Raspberry Pi 3 could be a laptop, this kit from AdafruitRemove non-product link is for you. You’ll have to bring your own Raspberry Pi board, but it has everything else you’ll need: a 14-inch 1080p screen, easy access to the Pi as well as any other cables or USB devices, an 8GB SD card with Pi-Top OS, various cables and screws, and charger. This second-generation PiTop Kit is compatible with multiple Raspberry Pi boards such as the Raspberry Pi 3 Model B+.

Get into the world of artificial intelligence with Google’s AIY Vision KitRemove non-product link. It comes with an included Raspberry Pi Zero WH board and pre-loaded SD card. This kit helps DIYers create an intelligent camera that can “recognize objects, detect faces, and emotions.”

The other key components are the Raspberry Pi Camera Board, Vision Bonnet Board, push button, button harness, privacy LED, and buzzer.

Retailer: Amazon Price: $40 Board included: No

Some Raspberry Pi kits include the board and everything you need to get started. Others, like the Freenove RFID Starter KitRemove non-product link, don’t bundle in the actual Raspberry Pi but instead give you a whole lot of tools for hardware hackery.

This kit focuses on projects that include radio frequency identification (RFID) with components such as a keypad, breadboard, stepping motor, and (of course) an RFID module. Freenove offers 53 projects with the kit that involve three programming languages: C, Python, and Java.

Retailer: Amazon Price: $50 Board included: No

This particular Freenove kit comes with practically everything you need to start hardware projects: the Ultimate Starter KitRemove non-product link includes more than 200 trimmings for 57 projects. The only thing missing is the Raspberry Pi itself.

Now this is an interesting project kit for air travel fans. It lets you transform your Raspberry Pi 4 or Pi 3 into an ADS-B (automatic dependent surveillance-broadcast) ground station—you’ll receive real-time data from airplanes within range of the included FlightAware antenna.

Currently, the Pi Hut is sold out of this kit, but we’re hopeful it will be back in stock soon. The kit includes a Raspberry Pi case, microSD card with PiAware software installed, power supply, video cable, ethernet cable, heat sink, FlightAware Pro Stick or Pro Stick Plus, USB cable, 1090MHz antenna, and a 1090MHz band-pass SMA filter.

This kit is customizable, so make sure you go through the various choices ModMyPi offers before paying.