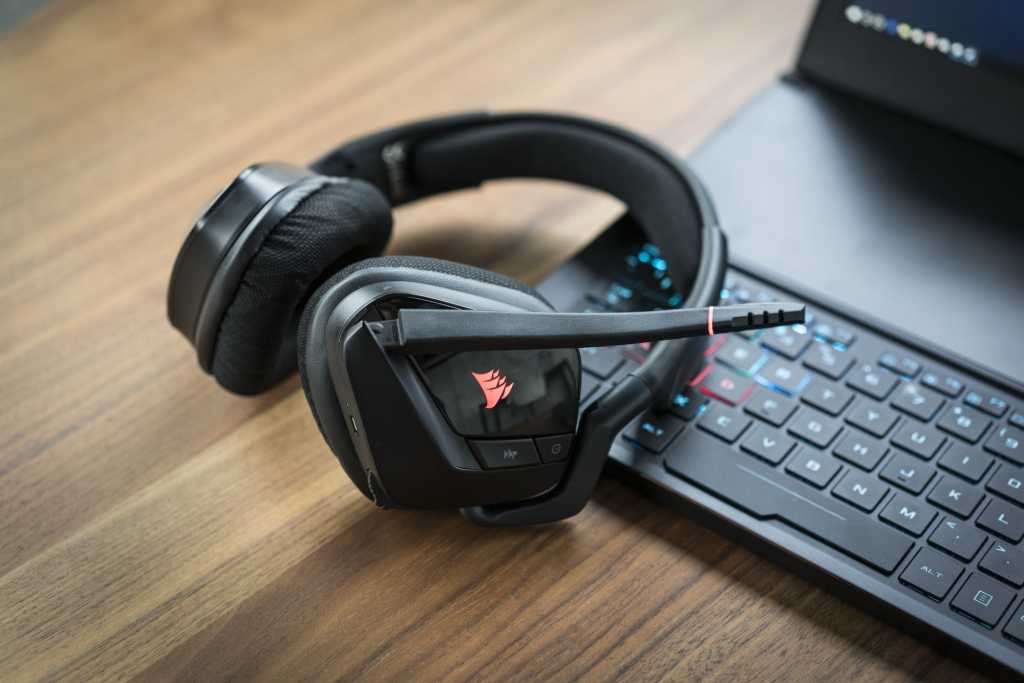 With an improved microphone, Corsair’s wireless Void Pro is now an even better deal for its inexpensive $100 price tag—though this new iteration carries over many of its predecessor’s flaws.

Corsair’s carved itself out a nice niche. Wireless headsets have come down in price a lot over the last five years, but still average around $150 list price—a category that includes Logitech’s G533 and G933, HyperX’s new Cloud Flight, the SteelSeries Arctis 7, Razer’s Man O’ War, and more.

And yet somehow Corsair continues to put out its flagship wireless headset for $100. The latest iteration is the Void Pro, which improves upon its predecessor’s microphone while keeping the same low price. Not a huge upgrade, but is it enough to earn our recommendation? Read on to find out.

I’ll admit: I was hoping for a more extensive design overhaul with the Void Pro. That’s not the case. Corsair’s Void Pro is essentially identical to the previous Void model. If you loved the original Void, you’ll love the Pro. If you, like me, found the Void competent but flawed in numerous small ways? Well, all those flaws have been carried over too.

Chief among them, for me, is the size of the Void Pro. Even on the lower settings, the Void Pro has a tendency to feel loose. This can be beneficial. While some headsets clamp down on your head/jaw and gradually become painful, the Void Pro’s light touch allows for longer-term comfort. However, the Void Pro is so loose it actually slips around when I look up or down, or even lean back in my chair.

This, combined with the Void Pro’s oversized kite-shaped ears and slick mesh padding, contributes to weirdly precarious feeling—as if the headset might fall off at any moment. You eventually get used to it, but other headsets (like the HyperX Cloud Alpha) manage to feel both comfortable and secure. I wish Corsair could find a similar compromise, because it’s the main issue I have with the Void line.

The Void Pro is otherwise pretty solid though. While sporting a bit more plastic than some of its competitors, the reinforced metal headband gives it a decent heft. The headband also slants forward a bit, which balances its weight better than some other headsets.

Corsair’s RGB lighting remains still top-notch, and easily controlled through software. Battery life is also decent, with around 12 hours of battery when lit up and 16-ish when dark. Either way, it’s usually enough to get through the day without needing a charge—though when I did need the charging cable mid-day I was annoyed at how short it is. On the other hand that’s easily rectified by buying (or just scrounging up) a longer microUSB cable.

Corsair was also kind enough to send over the blacked out version of the Void Pro this time, rather than the bumblebee colorway we’ve dealt with the last few times. No surprise: The jet-black version is a lot easier on the eyes. Less unique maybe, but better than what I referred to last time as “Stab Me In The Eyes Yellow.”

One weird caveat: Even the black (or “Carbon” as Corsair calls it) version of the Void Pro comes with a yellow-accented charging cable and USB dongle. For…reasons. The USB dongle could also stand to be shrunk down a bit. It’s still a full two-inch thumb drive size, which is a bit annoying whether plugged into the front or rear of the PC.

As I said, the Void Pro mimics the original Void, flaws and all. Those flaws don’t detract too much from the Void Pro considering it’s only $100, but I hope the next refresh is more extensive and solves at least a few of these longstanding design issues.

Can you hear me now?

But let’s talk about how it sounds, since that’s where Corsair’s concentrated its efforts—particularly the microphone.

It really does make a huge difference. Ostensibly the reason you’re buying a gaming headset and not a comparably priced (and probably better sounding) pair of headphones is because you want the convenience of a built-in microphone. If that microphone sucks, then why bother?

“Corsair’s problem is twofold. First, the range is pretty narrow and it sounds like you’re talking through a cell-phone mic. Second, it has a bad habit of picking up any and all plosives.”

The Void Pro is better on both counts, though it’s the fidelity that counts most. As I said, the original Void’s microphone sounded like you were talking through a cell phone or a walkie talkie. A headset microphone just needs to be “good enough,” considering most users are only using it for in-game voice chat, but Corsair barely met even that low bar before. The new Void Pro mic is more natural-sounding, more in line with what I’d expect from a headset in 2018. It’s better on the plosives front too, picking up fewer secondary noises—good for anyone who doesn’t use push-to-talk.

As for playback, not much has changed. Again, it’s a bit of a “flaws and all” situation. First and foremost, the ears still leak a lot of sound—not great if you’re in a shared living space situation. Even at low volumes, whatever you’re listening to can be clearly heard in a quiet space.

Aside from that minor mechanical issue, the Void Pro is brighter-sounding than your average gaming headset, with a default sound profile that’s light on the bass. Audio can also sound muffled at times, especially music where there are lots of complicated tracks layered on top of each other. It lacks the roominess of something like the HyperX Cloud or Logitech’s G933.

The mid-range is clear though, and that’s a solid foundation for the user to then EQ upon. Like the original Void, Corsair’s CUE software is flexible enough to give the Void Pro a decent bass presence and sharpen the muffled high-end. I typically prefer a headset that sounds good by default, not one where I have to muck around in the EQ, but well, it’s $100.

And that’s the catch, right? Like I said with the original Void, you can easily get better audio—both from cheaper wired headsets and more expensive wireless ones. But for $100 and wireless, the Void Pro is more than good enough for the average person. Even more so, now that the microphone is up to par.

It’s not the first headset I’d reach for, and I’d personally recommend the extra $50 for Logitech’s G533, but if you want wireless capabilities and don’t want to spend more than $100, then the Void Pro is a worthwhile option. Your only option, really.

Again, Corsair’s carved out a nice niche for itself here.