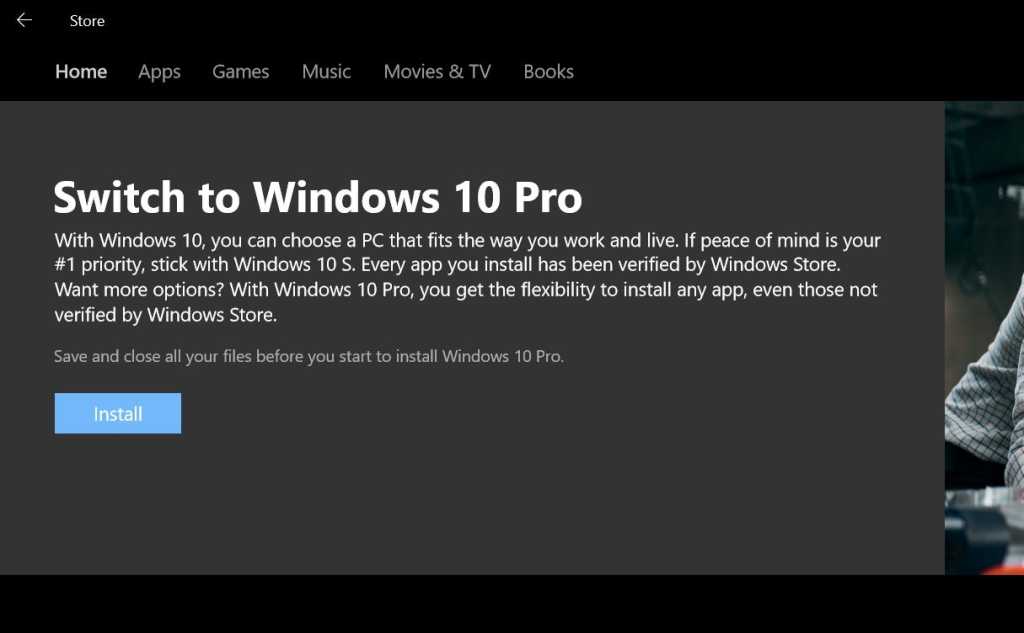 For many people, the future of Windows 10 could begin with Windows 10 S.

Windows 10 S only allows UWP apps to be loaded from the Windows Store, locking out traditional Win32 .EXE files. (Thurrott.com noted, however, that these versions of Windows 10 S will apparently support third-party antivirus software, which traditionally runs as legacy .EXE versions.)

This doesn’t mean Windows 10 Home and Windows 10 Pro will go away, or that PC makers won’t be able to switch the operating system mode themselves. Most users will have the opportunity to switch to full Windows 10 for free. Consumers who wish to upgrade from Windows 10 S Pro to Windows 10 Pro will be charged $49, Thurrott.com reported. However, the leaked document suggests that a majority of users won’t bother switching, creating an ever-larger customer base for the UWP apps in Microsoft’s store online.

Microsoft declined to comment directly on the report. “Windows 10 S provides a streamlined, secure and battery-efficient experience that we believe is a great choice for many customers,” the company said in a statement. “We’ll share more about what’s next for Windows 10 S when we’re ready.”

The leaked document also offered an intriguing view into how Microsoft prices Windows 10 for different tiers of device. The document defines a hierarchy of device configurations—Entry, Value, Core, Core+, and Advanced—each with their own hardware specifications and Windows pricing. Microsoft defines “Core+” PC, for example, as a desktop machine with less than 8GB of RAM and up to 2TB of storage. For such PCs, Microsoft charges $86.66 for Windows 10. For an “Advanced” PC with hardware like a Core i7 plus 16GB of memory, Microsoft charges $101 for Windows 10. The price changes go into effect April 2, with the exception of Windows 10 Home for the Advanced tier, which launches May 1, Thurrott.com reported.

While this pricing is invisible to end users, it surely affects the final cost of any Windows device. An open question, though is whether the different tiers will also include different feature sets in Windows 10. For that, we’ll probably have to wait until April.

What this means to you: The leaked document adds some intrigue to future versions of Windows. It’s one thing to buy a product like the Surface Laptop with Windows 10 S as part of the package. If Windows 10 S is what you get unless you take the trouble to switch, that could annoy or confuse users who are accustomed to the greater freedom of full-fledged Windows 10. On the other hand, it sounds like a great way to drive more people to the Microsoft app store.

This story was updated at 12:11 PM with a comment from Microsoft.