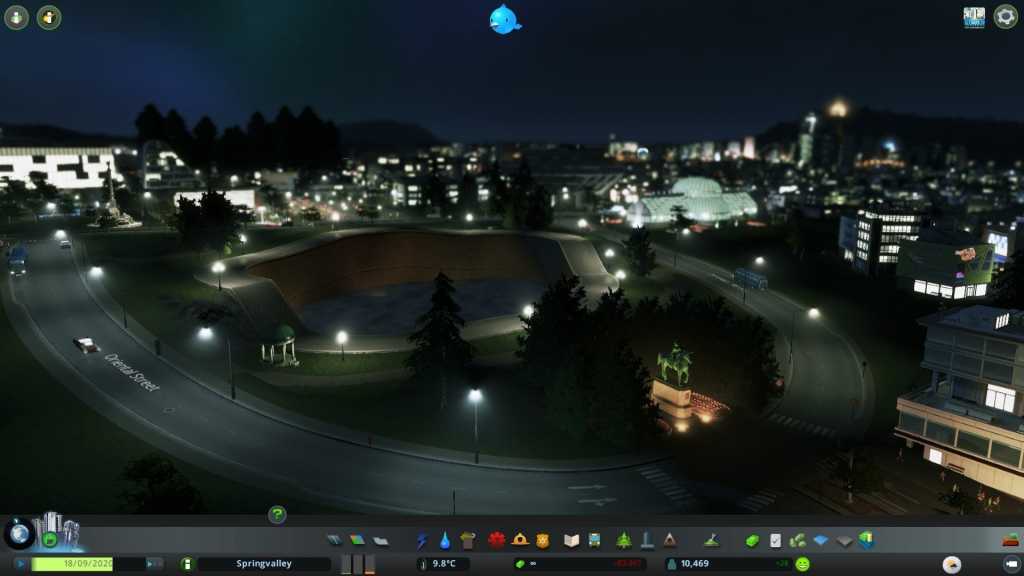 I’ve never really thought about parking lots, and that’s a problem. I mean, who does? I’m sure it’s someone’s job to design parking lots—to optimize the space to fit as many cars as possible, to pick out those tiny saplings that one day will shade the lucky few who get to park underneath, to decide whether the spaces will run parallel or diagonal. It’s not my job though, and now I’m at a loss. I’ve spent the last half-hour in Cities: Skylines trying to plan out a parking lot for a combination PetSmart-Trader Joes-Office Max-Wells Fargo, and it’s not going great.

I’m fascinated though. By suburbs.

That’s the latest evolution in my love affair with Cities: Skylines. Suburbs are so boring, so sterile, but that in itself is a challenge. Trying to recreate those generic strips of American big-box retail, the dumpsters and shopping carts and the inevitable fast food restaurant out front, requires an entirely different set of skills from the flashy bright-lights-big-city layouts I’m used to attempting.

The fact I’m still tinkering with Cities: Skylines ($30 on Steam) nearly three years on from release is testament to its quality though. At release, it was the best city builder. In 2018, it’s even better—the result of smart development choices by Colossal Order and one of the most active modding communities I’ve ever seen.

Paradox’s DLC strategy is controversial, to say the least. In many ways, Paradox predicted the current “Games as a Service” trend—a near-constant stream of post-release DLC, with certain smaller features given away to players for free. That model permeates most of Paradox’s published titles, from Crusader Kings II to Europa Universalis IV to Stellaris and so on.

Some players love it, some don’t. Paradox is a microcosm for the industry-wide “Games as a Service” debate, with some happy to have a reason to keep playing the games they already bought and love. Others lament the trend, reminiscing about a mythical time when games didn’t want to squeeze as much money out of players as possible. And I can sympathize. Even as someone that doesn’t mind Paradox’s setup, I’ll admit it’s intimidating when you go to purchase a game and realize there are 40-plus different add-ons to sift through too, trying to discern what’s important to buy and what’s not.

There are two ways to monetize a city builder: You can release expansions with new buildings or release new features. The former path would seem to be easier, and indeed it’s the model EA followed with 2013’s disastrous SimCity reboot. EA clearly made SimCity expecting to sell people new buildings, both down the line and at launch. British landmarks, French landmarks, and more were available early in SimCity’s lifespan.

When all your building add-ons come from a centralized repository, you only get the most obvious buildings though. That limitation’s apparent in those SimCity add-ons. You want Big Ben? The Eiffel Tower? You’ve got it. They’re world-famous landmarks for a reason.

But it’s the death of creativity. There are only so many world-famous landmarks, and only so many buildings a development team can be expected to add to a city-builder (even if the game doesn’t crash and burn right out the gate).

Cities: Skylines let modders take care of new buildings. And modders added those world-famous landmarks, of course. Big Ben’s available, as is the Eiffel Tower. So are the smaller landmarks, though. That’s what makes Cities: Skylines such a treasure. The people creating content for Cities: Skylines are located all over the world. They love their cities, their landmarks.

The mundane is there, too. Starbucks, In-n-Out, McDonald’s, Taco Bell, CostCo, Target, PetSmart, Trader Joe’s, Office Max, KFC—all the generic establishments that litter American towns and cities across the nation. People have built those, too.

That category’s especially interesting because it’s almost entirely up to modders. It’s doubtful those buildings would officially make it into a city builder. Not only are they “boring,” the licensing mess probably isn’t worth it. But in the legal gray area in which mods exist? Yeah, go ahead, place your Taco Bell.

And boring is exactly what makes them important, in this case. They’re such a part of the American landscape, it’s weird to see a suburb without a McDonald’s or a Taco Bell or a Target. “Boring” is what makes it feel real, stitches together a hodgepodge of landmarks into a city.

Even roads are represented. Here’s a highway merge from Myrtle Beach, South Carolina.

Modders have done a hell of a job, in other words. And it doesn’t stop with unique buildings. I’ve especially enjoyed using the More Beautification mod to place props everywhere. It’s especially fun designing parks (and parking lots).

Credit to the developers at Colossal Order for staying out of the way too, though. As I said: Selling buildings is the most obvious (and presumably easiest) path towards making money on post-release content. With that need mostly obviated by mods, Colossal Order’s focused on adding features instead. 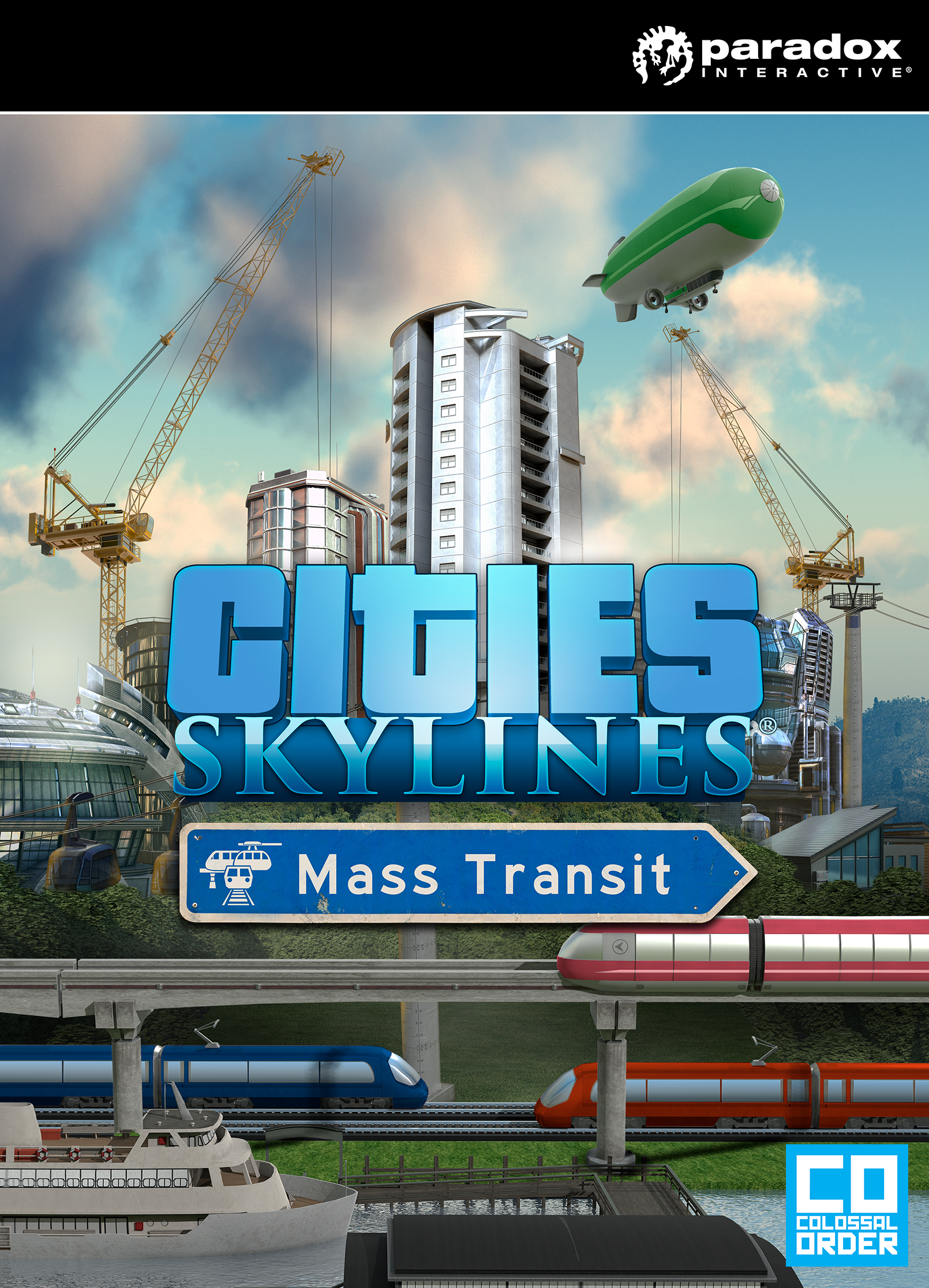 After Dark added a day/night cycle, Mass Transit added new public transportation options, Natural Disasters should be obvious. These expansions added depth to Cities: Skylines’ already-robust simulation, and the game is better for it.

There are cosmetics too. You can grab the “High Tech Buildings” pack for instance, and the recent Green Cities expansion is skewed a bit heavily towards buildings instead of features. These are skippable, considering the wealth of options in the Steam Workshop.

As I said, it’s like Cities: Skylines is its own sequel at this point. That, to me, is the best praise I could give a “Games as a Service” game—one where I barely feel the need for a proper follow-up because the developers and community have managed to keep the original alive for so long. And, in this case, done it without feeling predatory, without introducing loot boxes, and while giving away some of the best features (like the aforementioned day/night cycle) for free.