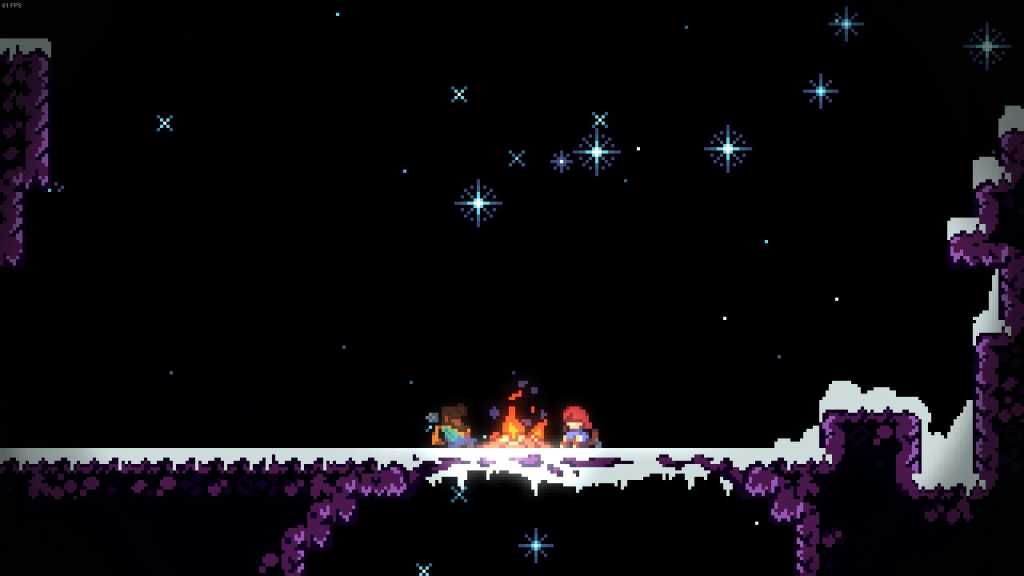 Celeste is the best precision platformer in years, but it’s also a game about the figurative mountains we all struggle with, and that’s what makes it truly special.

“Be proud of your death count! The more you die, the more you’re learning. Keep going!”

Keep going. Funny how two words can mean so much. In Celeste, “Keep going” is an ethos, a mantra that runs through your mind after every failed jump, every mistimed obstacle, every headlong fall into a spike pit. Celeste is a game that believes in you, and it’s that belief, that optimism, that elevates it to something special.

Everyone has their own mountain to climb. In Celeste, that mountain is both figurative and literal. You play as Madeline, determined to reach the summit of the titular Celeste Mountain, a labyrinth of spike pits and crumbling hotels and unsettling monuments and one very spooky temple.

Actually, and I feel almost guilty admitting this, but I almost passed over Celeste. Oh it looked charming enough, but I felt like the whole “ultra-difficult platformer” trend was a bit played out. It’s been eight years of everyone basically making their own subpar Super Meat Boy clones, aping or even upping the difficulty but never really capturing the same feeling, and definitely not advancing the genre in any meaningful way.

So to say Celeste is mechanically perfect is the least of my compliments. And it is mechanically perfect, or near enough that its flaws are insignificant. Simplicity gives way to depth. As the player, you only have access to four real actions: Run, jump, a double-jump/dash that lets you change direction in midair, and the ability to climb walls for a short period of time.

Celeste mixes and remixes these simple actions in dozens of ways. It’s one of the tightest sets of levels I’ve ever played, with each level introducing environmental hazard and each screen a unique challenge. For instance, one early area is full of strange starlit goo that lets you dash through it and carry momentum to the other side—as long as there is another side. If the goo rests against a wall, instead of popping safely out the other side you’ll instead be trapped inside. Chalk up one more death.

Another area is plagued by shifting winds, alternately blowing you across massive gaps and then halting your forward momentum. A third is shrouded in darkness, hazards only illuminated once you’re mid-jump. If there’s any downside, it’s that these areas don’t always tie together smoothly, and indeed the mountain’s “backstory” is a muddle of contradictions and half-thoughts.

It makes for fantastic levels though. Celeste isn’t exaggerating when it says “The more you die, the more you’re learning.” Like the best precision platformers, it often feels more like a puzzle than a test of a reflexes. It’s consistently teaching you new things, constantly introducing new ideas and unique challenges up through its final moments. It’s a triumph.

Think about how amazing that attitude is though, too. “Keep going!” “You’re learning!” This is the other side of Celeste, and the one I think resonates most, elevates it from A Good Platformer to A Great One. A must-play, even.

The precision platformer genre—indeed, most games—are predicated on an adversarial relationship. It’s in the language we use, even. We don’t “complete” games, we “beat” them. It’s a contest, human versus machine as if we’re all John Henry battling against the steam drill. And the precision platformer has often leaned into this, consciously or not. Super Meat Boy was very much a game to be beaten.

Celeste is more ephemeral. There’s the mountain, sure, but Celeste is just as interested in the barriers we erect for ourselves. Madeline is climbing a mountain. She’s also battling depression, loneliness, anxiety—the little voices that make the mountain seem so insurmountable. This aspect is personified, given form as an “evil” version of her, literally named “Part of Me.” She shows up, chases Madeline, ruins her relationships. She’s the pessimist, the voice that says “You don’t know how to climb mountains. You’ll never make it.” It’s a voice I think many (all?) of us are familiar with.

Keep going, though. That’s Celeste’s counterpoint. That’s where it differs from so many of its predecessors, because Celeste recognizes Madeline in the player, and it urges you on too. You can get there. You can make it to the top of the mountain. It’s hard, but keep trying. You’re not alone.

Need help? Celeste also has a set of assist tools. Slow down time, get an extra jump—no judgment, just keep going. Climb the mountain on your own terms, no matter what it takes. Some of us might need help, and that’s nothing to be ashamed of. We all can get there.

It’s an immensely gratifying message. Our culture often shies away from honest and heartfelt expression. Too much positivity is fake, or cloying, or—heaven forbid—cheesy. We live in the era of the gritty reboot, of prestige TV and hard-hitting realism.

Celeste’s optimism is refreshing, especially since it comes from within. It’s a call-and-response, a game that says “Keep going!” and waits for your next button press as confirmation, “I will!” “You’re learning!” and with every death, every obstacle stumbled against and overcome, you say “I am!” It’s a marriage of theme and mechanics so pure, so confident.

And one hell of a platformer, too.

Everyone has their mountain to climb. Some days I sit down to write and no words come out. Sometimes it’s hard for me to get out of bed. I get anxious in crowds. I get lonely, and often. I’m a lifelong hypochondriac. I know my mountain pretty well by now.

Which is to say, I identify strongly with Celeste, and with Madeline. For eight hours or so, Madeline’s mountain encapsulated my own, resonated with my experience. And then Celeste also became the cheerleader at my back, urging me on. Keep going. And I did. I died a lot, I learned a lot, and I eventually reached the top of that damn mountain.

May we all be so lucky in real life.