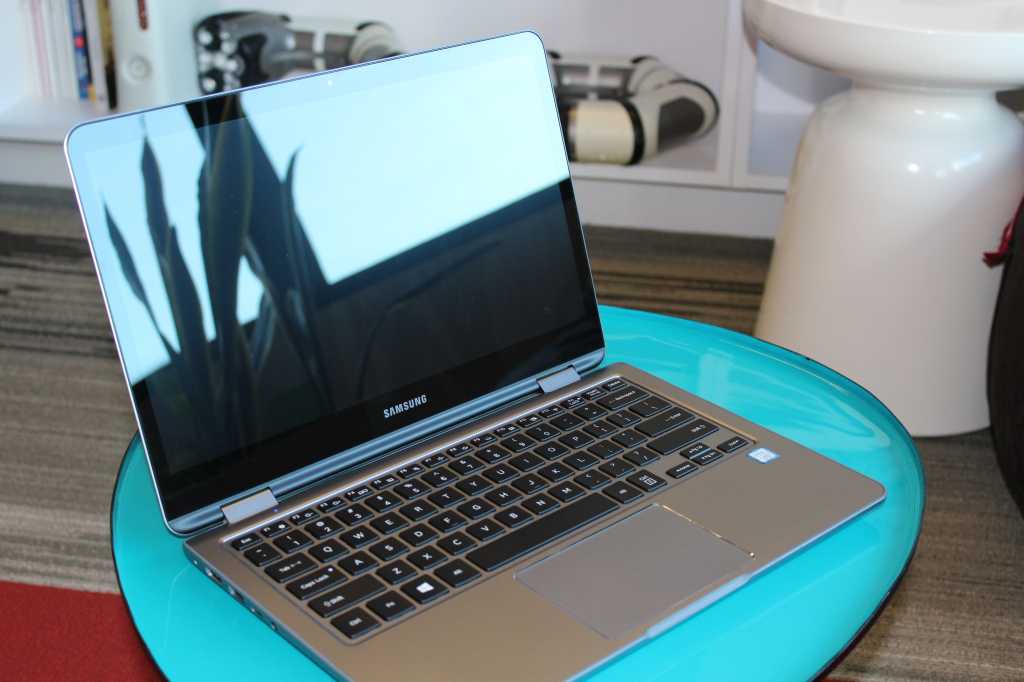 While the Samsung Notebook 7 Spin isn’t the fastest 2-in-1 convertible on the block, it boasts an enticing combination of solid quad-core performance and impressive battery life, all in a reasonably small and affordable package.

The latest version of the Notebook 7 Spin is—at launch, anyway—a one-size-fits-all affair. For a list price of $900, you get a 13.3-inch, 2-in-1 convertible with an 8th-generation quad-core Intel Core i5-8250U processor, a 256GB solid-state drive, and 8GB of DDR3 RAM. (Samsung says a version of the Spin with 16GB of memory might eventually be in the offing.) If you want to upgrade the Spin yourself, get your pry tools ready, because there are no screws or user-accessible panels in the shell.

Tipping the scales at 3.2 pounds and measuring a reasonable 12.4 x 8.5 x 0.7 inches, the new Notebook 7 Spin is a tad lighter than its earlier incarnation, and it’s also slightly trimmer and lighter than the Dell Inspiron 13 5000, a competing (and cheaper) 2-in-1 convertible with the same 8th-generation CPU and similar specs.

Now that we’ve got the numbers out of the way, how does the Notebook 7 Spin feel in hand? A tad heavy, if you ask me, but that’ll be the case for just about any 13-inch laptop that weighs more than three pounds. If you want something lighter, expect to pay a few hundred dollars more.

The Spin’s metal “stealth silver” shell looks solid and professional, if not exactly head-turning. That said, the Spin may get some admiring looks when you tent it on a tabletop or swivel its display all the way around in tablet mode.

While the Notebook 7 Spin’s shell is a bit dull, the same can’t be said of its vibrant 13.3-inch FHD touch display. Indeed, the Spin’s PLS (Samsung’s in-house version of IPS) display is bright (think 300 nits, or candelas), sharp, and gorgeous. Enable the Notebook 7’s HDR mode (an HDR toggle shares space with the F10 key), and images becomes even more eye-popping, with inky blacks and bright, vivid colors.

The Spin’s display performs well even at wide viewing angles, and the touch-sensitive screen responded perfectly to my swipes and taps. While the Spin does boast Active Pen support (a feature that’s notably lacking in the Dell Inspiron 13 5000), you’ll have to supply your own pen.

The Notebook 7 Spin’s snappy, backlit keyboard boasts slightly concave keys, along with hotkeys that juggle your external monitors and toggle the trackpad, speakers and Wi-Fi on and off. You also get the aforementioned HDR key, along with a hotkey that flips the screen image into a 180-degree “consulting” mode. Disappointingly (if not surprisingly), the Settings hotkey opens the Samsung settings page, rather than the main Windows settings screen you might expect.

Laptop speakers are generally nothing to get excited about, but the Spin’s twin speakers are decent. Cranking “Live and Let Die” by Paul McCartney & Wings and then taking a sharp left turn into Mozart’s Symphony No. 27, the built-in speakers (which, per usual, sit on the underside of the laptop’s shell) sounded reasonably crisp and roomy. I could even detect the tiniest hint of bass.

I was also impressed with the Notebook 7 Spin’s “far-field” microphone, which managed to pick up my voice even when I was standing several yards away. Indeed, I was able to summon Cortana while standing a good 20 feet back from the Spin, speaking in a normal voice. Standing in the same position and again speaking in an even voice, I captured a clear if quiet recording of myself using Samsung’s Voice Notes app.

Raining on the Spin’s parade is its disappointing VGA webcam, with blotchy, grainy and blurry images that are barely passable for video chat.

The selection of ports on the Notebook 7 Spin is good, not great. On the left edge, you get a full HDMI port, USB 3.0 Type A, USB 3.1 Gen 1 Type (up to 5Gbps, passing 4K video with an adapter), and a headphone jack.

On the right edge, you get a single USB 2.0 port, along with a power button that doubles as an awkwardly placed fingerprint reader.

While the lack of Thunderbolt ports on a sub-$1,000 machine like the Spin is understandable, we’re disappointed that Samsung decided to skip on an SD card reader.

Thanks to its 8th-generation Intel Kaby Lake Refresh processor, the Samsung Notebook 7 Spin manages to cram quad-core power into its slim shell, a near-impossible feat just a year ago. As expected, we found the Spin to be peppy and light on its feet, but with a tendency to fade a bit in the final stretch compared to its 8th-generation competitors. That said, leaving a little power in reserve pays off for the Spin in other ways, as you’ll soon see.

A quad-core laptop like the Notebook 7 Spin shouldn’t have any trouble with PCMark 8 Work 2.0 Conventional, a benchmark that simulates day-to-day PC tasks like editing word documents and browsing the web.

With its score of 3,220, the Spin doesn’t disappoint, but it also proves (yet again) that a quad-core CPU won’t necessarily double the everyday desktop performance of a dual-core system (like, say, the Asus VivoBook 5). If you’re a laptop shopper who’s only interested in running Office and browsing on Edge of Chrome, a pricey quad-core system is probably overkill.

Things get more interesting when it comes to our HandBrake benchmark, which tests how a laptop handles the punishing task of encoding video.

The Notebook 7 Spin’s HandBrake score of 4,475 (the average time it took, in seconds, to encode a 30GB MKV file into a smaller MP4 file) is a tad slower than what we’ve seen from other recent 8th-generation quad-core laptops, like the Inspiron 13, and it even lags a bit behind the score of its dual-core cousin, the Notebook 9 Pro.

Given that the Spin is smaller than both the Dell and the Notebook 9, it’s likely Samsung choose to sacrifice speed to keep the Notebook 7 Spin’s cramped innards as cool as possible. That said, keep in mind that while the Spin’s HandBrake result is a few steps behind those of its 8th-gen competitors, it’s still in the mix.

We see pretty much the same picture when it comes to Cinebench, a benchmark that pushes a laptop’s CPU to the limit as it renders a 3D image. While it handily beats the dual-core Notebook 9 Pro and ASUS VivoBook 5 in our multi-thread Cinebench test (the longer set of bars below), the Spin struggles versus its 8th-gen quad-core competitors, including the cheaper (if slightly larger) quad-core Dell Inspiron 13.

With its integrated Intel UHD Graphics 620 core, the Notebook 7 Spin shouldn’t be expected to crank out the kind of graphics performance you’d see in a system with a discrete graphics chip—and indeed, it doesn’t.

The Spin’s test results tell the tale, essentially running even with other quad-core systems with integrated graphics, and only moderately outpacing the dual-core VivoBook 5. Blowing all those systems out of the water are the (considerably bigger and pricier) Lenovo Yoga 720 and Samsung Notebook 9 Pro, which boast discrete GeForce and Radeon cores, respectively.

The Notebook 7 Spin’s benchmark results may not be quite as fast as its 8th-gen quad-core competitors, but it can certainly outlast them.

We test laptop batteries by looping a 4K video with the display brightness set to about 250 nits and the volume on halfway. The Spin’s 43WHr battery lasted (on average) 468 minutes, or about 7.8 hours, a figure that outstrips the peppier Inspiron 13 5000’s time by more than two hours. Sound like we’ve got a case of the tortoise and the hare (although calling the Notebook 7 Spin a tortoise isn’t exactly fair).

Incidentally, the two laptops in our comparison that beat the Spin’s battery life score benefit from their roomier shells and battery capacity.

Like we said before, speed isn’t everything, and indeed, a wicked-fast ultrabook with a dead battery won’t do you any good at all. So while the Samsung Notebook 7 Spin isn’t the fastest 2-in-1 convertible on the block, it boasts an enticing combination of solid quad-core performance and impressive battery life, all in a reasonably small and affordable package.