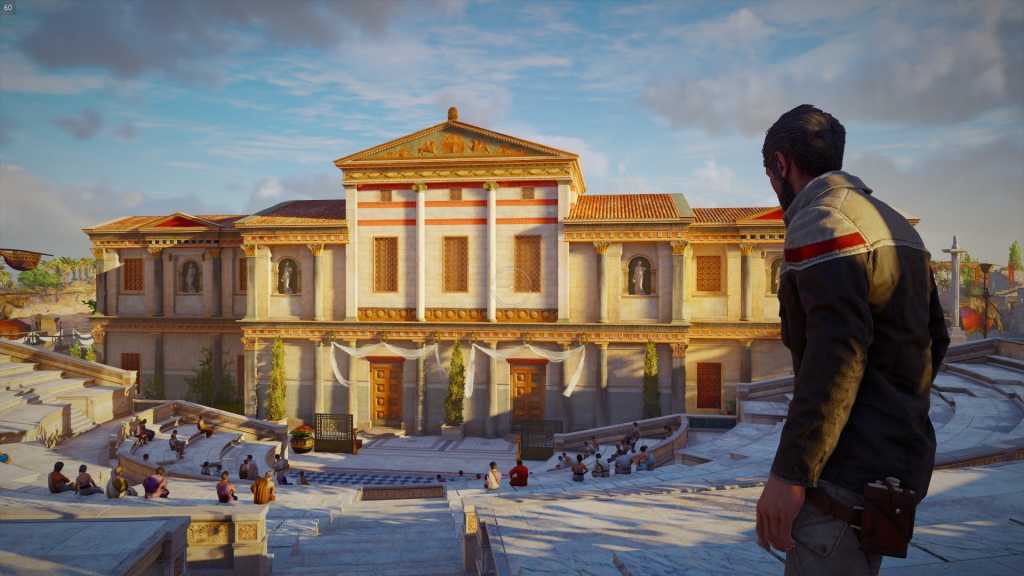 Do you know what a “Hippodamian Grid Plan” is? I didn’t until I played Assassin’s Creed: Origins’s new Discovery Tour mode.

Turns out Hippodamus of Miletus is known as “the father of European urban planning,” a Greek born in 498 B.C.E. who argued that cities should be built rationally (a.k.a. on grids) instead of devolving into haphazard labyrinths. Most important: His ideas were adopted by Deinokrates, principle planner for the city of Alexandria.

And the rest, as they say, is history.

I’ve been waiting for Assassin’s Creed: Origins’s “Discovery Tour” mode ever since Ubisoft showed it off to us last year. The gist: Ubisoft took the world from Origins, the sprawling recreation of Ptolemaic Egypt that played host to Bayek’s adventures last year, and stripped most of the “game” elements out of it. There are no missions here, no throats to slit, no Phylakes to fend off.

The rest is intact, though. The meticulous (albeit scaled down) version of Alexandria, with its famed lighthouse towering overhead. The crocodile-infested waters of the Nile River. The gleaming white natron mines. The pyramids, both Great and small. And the people, too. Everywhere you look, people. Some are selling wares, hawking linens and jewelry and weapons. Others are riding chariots, or guiding boats through the canals at Memphis, or praying at the Temple of Sekhmet.

It’s a vast and intricate world, created to play host to Origins and its tale of revenge. As I’ve been saying for years though, Assassin’s Creed is often more impressive from a technical standpoint than as a game. These worlds are so detailed, such loving recreations of a time and a place people may never experience, it seems almost a waste to use them as backdrops for a decent action-adventure and then throw them in the trash.

Discovery Tour is a natural fit, then. The new mode scatters 75 “Guided Tours” across the map, themed around aspects of Egyptian history. The “Tutorial” tour, for instance, is titled “Alexandria: Planning of the City,” and consists of eight stations detailing everything from Alexander’s choice of site, the creation of its walls and gate, the advantages of the grid layout for moving military troops, and so on.

A bright golden line leads you from station to station, usually plopping you near an in-world object that’s related to the lesson at hand—looking out over the island of Pharos, for instance, when discussing how Alexander the Great heard about Pharos from Homer’s Odyssey. “There is, in front of Egypt, in the sea with many swells, an island called Pharos,” is the line in question.

But it’s been the niche tours I’ve enjoyed most so far. I dressed up as Cleopatra for a bit and then learned about Egyptian fashion trends. I also learned that camels aren’t actually native to Egypt—apparently they only came over around 500 B.C.E., when the Persians invaded. That was a surprise. Also, the Lighthouse of Alexandria survived a lot longer than I thought, with the last traces of its structure only being demolished in 1480, or just over 500 years ago.

It’s not that I couldn’t have learned these things off Wikipedia—and indeed, I’ve already supplemented some of Discovery Tour’s subjects with outside reading. Hippodamus is a throwaway reference in Discovery Tour, but I was so intrigued by someone being the originator of gridded cities that I immediately went and looked him up.

And that’s why Discovery Tour is valuable.

I could keep going. It was the golden age of “edutainment,” the educational video game… and then it all sort of disappeared. Not that games aren’t popular in the classroom. They are, and Minecraft has seemed ubiquitous in recent years. Others, like Kerbal Space Program, have clear educational uses. But when Broderbund died in the late ‘90s, the “blockbuster” educational game mostly died with it. A lot’s been written on why this happened, and I don’t want to rehash it here. This isn’t a story about why educational games are or are not a dead end.

Discovery Tour is an excellent compromise though. Assassin’s Creed: Origins was built by hundreds of people, spanning multiple continents. It took four years. The virtual world all those artists and programmers and sound designers and animators and so on created is inconceivably complicated, the type of world you only get with an enormous budget from a game expected to sell blockbuster numbers.

No education-first game could accomplish what Origins accomplishes. Nobody could afford it, not even in the heyday of edutainment.

Piggybacking education on the back of a massive project like Origins though? All those artists and programmers and et cetera already did 95 percent of the work. This exhaustive recreation of Ptolemaic Egypt is going to exist regardless. That’s the genius of Discovery Tour. It’s one of the most ambitious educational games I’ve ever played, certainly the most expensive and polished, and it’s an afterthought. It’s the side attraction, as if Steven Spielberg made Jaws and then David Attenborough walked onscreen to tell you about shark physiology.

It’s an example I hope other publishers follow. Discovery Tour has flaws for sure—Rock, Paper, Shotgun pointed out this week that all the nude statues have had their marble-hewn naughty bits covered with seashells, because undoubtedly some executive was worried it wouldn’t be allowed in schools otherwise. That’s an unfortunate misstep. Tours also vary in quality, with some diving fairly deep into their subjects and others providing an all-too-brief glimpse.

And I don’t think every game needs or would even make sense to include a Discovery Tour-type option. Did Wolfenstein II need something similar? Or NieR: Automata? Prey? Yooka-Laylee? Probably not.

Still, some unlikely candidates emerge. A bit of imagination and you could see how Call of Duty: WWII or Battlefield 1 could integrate more history. Modern settings would be interesting too. I think a guided tour option in Watch Dogs’s Chicago could’ve been just as interesting as touring Ptolemaic Egypt, given enough time and effort on Ubisoft’s part. And there’s always the Kingdom Come: Deliverance approach, though its encyclopedic codex entries are a bit less engaging than Origins and its interactive elements.

It’s worth looking into, at least. Discovery Tour has made me consider Assassin’s Creed: Origins in a new light. I stop to look at the people milling around, admire the different items that shops are selling. Elements that were a chore in video game terms, like large empty regions in between points of interest, seem realistic and important when education is the primary goal.

I’ve learned a bit, too—maybe not as much as I’d learn from picking up a book on the subject, but…well, Assassin’s Creed is more fun. And there’s enough dangled that when I do find a lesson I’m interested in, like Hippodamus, it’s easy to find further material to supplement.

It makes me a bit sad Discovery Tour wouldn’t exist without Assassin’s Creed: Origins, that we as a society don’t fund massive digital recreations of ancient history without tying them to a blockbuster franchise. Yeah, that’s a shame. Imagine what you could do with 100 of these tours, or 500. Imagine if Discovery Tour received as much post-release support as your average big-budget game.

But it’s a start, and a damned decent one. Hopefully it’s more than a one-off experiment.