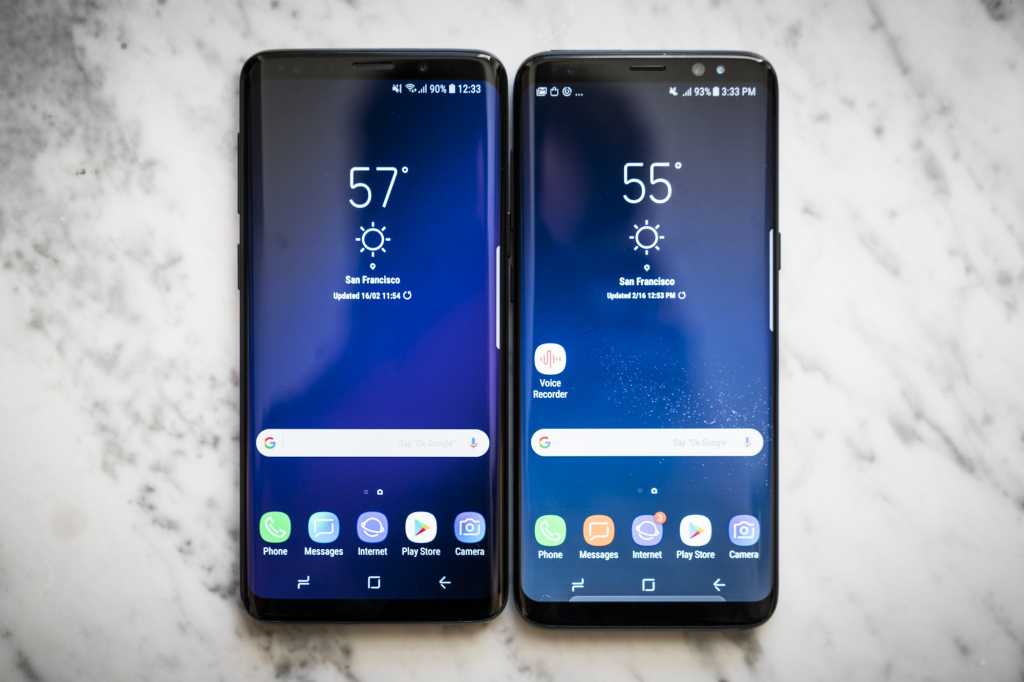 No, Samsung hasn’t run out of ideas. The Galaxy S9 may be visually indistinguishable from the Galaxy S8, but there’s no reason to think the company has lost its innovation edge. Like Apple, Samsung has been known to stick with the same phone design for at least two generations, and the Galaxy S8 was so far ahead of the field, the S9 will still look and feel very much like a fresh 2018 handset even after all the other flagships make their appearance.

If anything, Samsung is paying the price for being too innovative with the S8. People may forget that Samsung used the same overall look for the S6 and S7 (Edge models aside) before blowing us away with the S8, and we all know Apple recycled the general design of the iPhone 6 for the 7 and 8 until the X flipped the script. Changing the design of a phone simply for the sake of doing so is a pointless battle. After all, less than a year ago we were all oohing and aahing over the S8, the phone that launched a thousand competitors.

What’s most curious about the S9 is that there really isn’t a gotta-have-it feature on which to hang its hat. But then again, the same was true of the S7. While that model brought back the expandable storage and water resistance that Samsung inexplicably removed from the S6, nothing about the S7 screamed, “BUY ME!” But that’s only because Samsung was hiding its cards while it crafted the S8. And the same can be said about the S9. Plenty of people who wanted an S8 but were holding out for a refresh will buy this, as will millions of S6 and S7 users. It’s a good, probably even great phone. But it’s just a placeholder before Samsung changes the game again.

Taken at face value, the Galaxy S9 is easily one of the best phones I’ve ever seen. The Infinity Display is just as stunning as it ever was, and the Snapdragon 845 chip, Dual Aperture camera, and AKG-tuned stereo speakers are all top-notch additions to an already near-perfect handset. And it corrected the S8’s biggest failing: the location of the fingerprint sensor.

But in an era of annual one-upmanship, the biggest criticism of the S9 is an apt one: It’s missing a wow factor. The newest features—the Dual Aperture camera, AR Emoji, and Live Portraits on the larger model—aren’t revolutionary or even all that new. Samsung debuted its Dual Aperture camera on the W208 flip phone let year, it introduced the dual-camera on the Note 8, and AR Emoji is equal parts Bitmoji and Animoji.

Still, all of these features together make for a great 2018 phone, and the Galaxy S9 will no doubt rank among the top handsets of the year. If anything, the S9’s meh factor speaks to how good Samsung’s Galaxy phones have gotten: It’s hard to criticize anything about the design or feature set; it just doesn’t feel new and exciting. Like the iPhone 7, the S9 is a safe, iterative release that serves to refine the existing system and build expectation for the release of something innovative and revolutionary.

If the Galaxy S9 has a philosophy, it’s about making a Samsung phone that’s as versatile and frictionless as possible. There’s the Dual Aperture camera for better low-light shots, the new DeX dock that eliminates the need for extra accessories, and Intelligent Scan that makes unlocking quicker and more reliable—all features that work to enhance the experience.

Simply put, the Galaxy S design isn’t the whole story anymore. Samsung was among the first to make large-screen phones that were comfortable to hold, and in many ways, the S8 is the culmination of Samsung’s design innovations: the AMOLED screen, the curved glass, the immersive viewing, the clever software shortcuts. With the S9, the innovations are more with the software and the system at large. It might not change the game, but it definitely keeps it moving in the right direction.

There was a time when Samsung would have rushed a new design to market just to keep pace with the iPhone X. It didn’t take long for the rest of the premium smartphones to catch up to the S8, and as such, the S9 looks more like a a me-too phone rather than a revolutionary new handset from one of the biggest smartphone innovators on the planet. But the S9 is still a standout handset even in a sea of 18:9 phones, and this time next year it’ll still be.

Whether the S9 is the best phone Samsung could make right now isn’t the point. There’s little doubt that there are all sorts of Galaxy S10 (or, gasp SX) phones under development, with foldable screens, in-display fingerprint sensors, edge-to-edge glass all around, wraparound screens, you name it. Maybe one of these prototypes will debut later this year as the Note 9. Maybe they’ll be next year’s big reveal at MWC. But whenever they land, they’ll make us forget all about how pedestrian the S9 is.

But Samsung is playing a long game here. Much like Apple slowly brought features and design tweaks to the iPhone 6 right up to the moment the iPhone X dropped, the S9 is the calm before Samsung’s next big thing. After nearly 10 years of Galaxy phones, the S9 is at once a culmination and an anticlimax, as Samsung prepares for the inevitable shift beyond rectangular slab phones with top-and-bottom bezels.

There are plenty of reasons to buy a Galaxy S9 if you need a new smartphone this year, but if you’re willing to wait, there’s a Galaxy phone in the wings that will bring sexy, wow, and wonder back. It just might take a generation or two to get there.