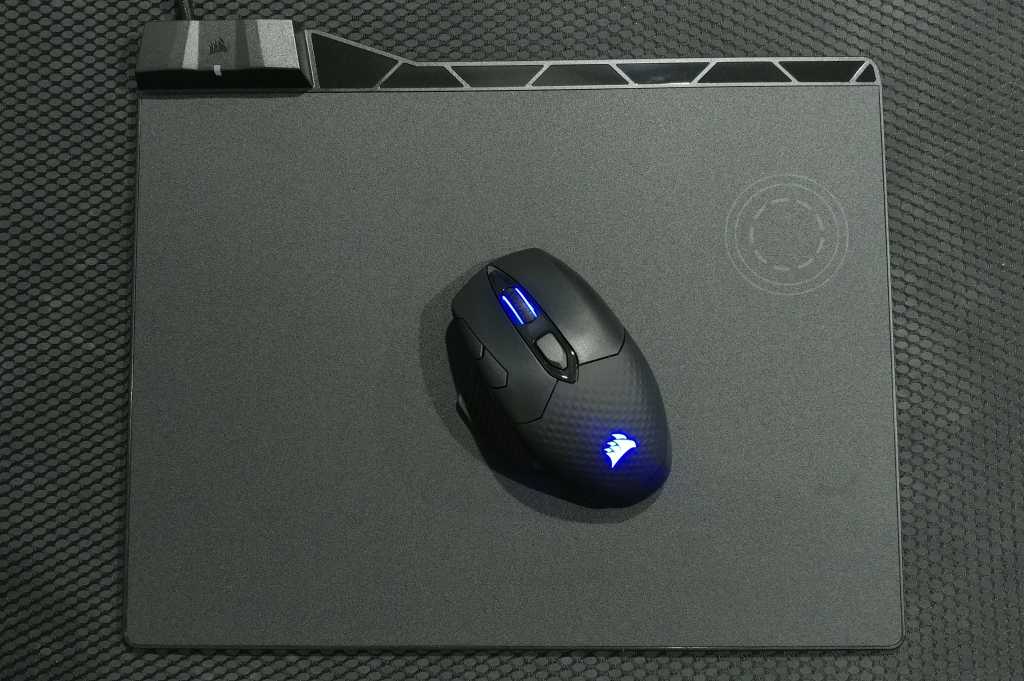 Corsair’s MM1000 is a decent mousepad, but not exactly the same revolution in wireless charging that Logitech’s Powerplay mousepad achieved last summer. Blame the Qi standard.

The day is finally here, and the challengers to Logitech’s revolutionary Powerplay wireless charging mousepad system have arrived. First up is Corsair’s MM1000 (currently $80 on Amazon), which actually was announced before Logitech showed off Powerplay last year. However, Logitech released its wireless charging mousepad suite last summer, while Corsair’s MM1000 took until 2018.

I’ve spent the last few weeks using both the MM1000 and Corsair’s Dark Core mouse—the only one currently designed to work with the new mousepad. We’ve reviewed the Dark Core mouse as well, but for now let’s dive in and take a look at the MM1000.

Not even one RGB light

I’m surprised it’s not RGB. That was my first thought. Logitech refrained from putting RGB ribbon lighting on its Powerplay mousepad last summer, but then again, Logitech never released an RGB mousepad.

But no. The MM1000 is actually even more restrained than Logitech’s Powerplay mousepad (about $100 on Amazon) which had an RGB logo in the top right corner. The only light on the MM1000 is a single green indicator in the top left that flashes if the mouse is charging. It’s more functional than decorative, meaning the only ornamentation to speak of is a black-on-black pattern in the plastic along the top edge. It’s probably the most minimalist design Corsair’s put out in years, and a huge contrast with the flashy K95 RGB Platinum keyboard we reviewed recently.

It’s a great mousepad though, as far as mousepads go. I’m historically pretty ambivalent about mousepads, but the MM1000 is pleasantly solid. It has a surprising weight to it, and feels like it’s built to be thrown around, chucked into a closet and pulled back out a year later, subjected to a thousand daily abuses. I’m happy about that, given that the Razer Firefly always felt like it could snap in half, and Logitech’s Powerplay mousepad felt similarly fragile. The MM1000 is a tank in comparison.

The only downside is there’s only one surface option: A slightly textured hard plastic, similar to the original MM800 and other mid-tier Corsair models. That means fans of cloth mousepads are out of luck, at least for now. The MM800 had a cloth version, so maybe a cloth MM1000 will eventually emerge—or maybe it’s a restriction of Corsair’s charging method, and cloth isn’t feasible.

In any case, the MM1000 is basically a black rectangle, like every other mousepad in existence. Not much to be said for aesthetics.

And that’s fine, because you’re buying the MM1000 for other reasons. Namely: It promises wireless charging without the need for wires. Does it deliver? Yes, absolutely—but with quite a few more caveats than Logitech’s Powerplay setup.

What you need to know first is that, despite doing essentially the same thing, the MM1000 and Powerplay are entirely different systems.

Powerplay is the name of a proprietary charging system devised by Logitech. Powerplay projects a charging field across the entire 13 x 14-inch mousepad, so no matter where you place the mouse it’s always powered—and not just powered, but trickle-charging too. When the mouse isn’t in use, Powerplay charges at a rate of 7 or 8 percent per hour, but even while moving around you’ll still accrue 1 to 2 percent per hour. As long as the mouse is on the mousepad, it should never dip below 85 percent ever.

It’s seamless, and in the nearly six months I’ve been using Powerplay now I’ve never once had to think about charging my G903. Powerplay completely changed how I think about wireless mice.

Corsair’s MM1000 is…not quite as refined. Sure, you’ll never need to worry about plugging a cord into the Corsair Dark Core mouse—but you’ll still need to think about charging it every night or two, and therein lies the difference.

See, Corsair uses the open-source Qi charging standard. You might’ve come into contact with Qi if, for instance, you’ve ever wirelessly charged your phone. It’s the same technology. The problem: Qi has a very limited range. That part should also be familiar to anyone who’s wirelessly charged their phone before. It’s not going to cover an entire mousepad, or even half a mousepad.

Instead, Qi covers a tiny zone in the top-right corner of the MM1000. Corsair’s helpfully highlighted this zone with a circle. That’s the only place where your mouse charges, and it only charges as long as it’s sitting still.

That means whenever you’re using the mouse, it’s discharging as normal. To its credit, the Dark Core mouse lasts 20 or more hours on battery, which is more than enough for even all-day use.

At the end of the day you need to consciously think about charging though—taking the mouse, putting it in the top-right corner, aligning it properly, and checking to make sure the green indicator light is flashing. Qi is so slow that it basically requires an overnight charge. If you don’t remember to start it then the Dark Core mouse is liable to die on you the next day.

And if you do run out of battery? Well, your Dark Core mouse is back to the dark ages. Time to grab the included MicroUSB cable and plug the mouse into your computer, the same way you would’ve done with any number of wireless mice before. So much for your fancy mousepad.

There is one interesting side effect from the use of the Qi standard, which is of course that you can charge your phone from the same hotspot. Corsair also includes an adapter, so phones without built-in wireless charging can still plug in and charge that way. That’s cool I guess, if you want to leave your phone trickle-charging wirelessly while using your mouse.

“You can charge your phone too!” isn’t a big enough draw to offset the MM1000’s downsides, and to be honest the whole proposition is a bit perplexing. Given that the MM1000 just uses a built-in Qi charger, I’m hard-pressed to explain why you couldn’t go on Amazon, buy a standalone Qi pad from any number of retailers for $15-$30, and then charge the Dark Core mouse off that instead. Sure, you’d lose out on the mousepad, but you’d recoup $50 in the process—and achieve almost the same exact effect. Put some of that $50 in savings toward the mousepad of your choice, and you’re golden. Hell, you could buy Corsair’s own RGB-festooned MM800, a standalone Qi charger, and the Dark Core mouse and only be out an extra $20 or so.

It’s a bit frustrating. On paper, the MM1000 and Logitech’s Powerplay system sound identical. In practice though the two are anything but. Powerplay is a completely new way to think about wireless mice. The MM1000 is just a new way to charge one.