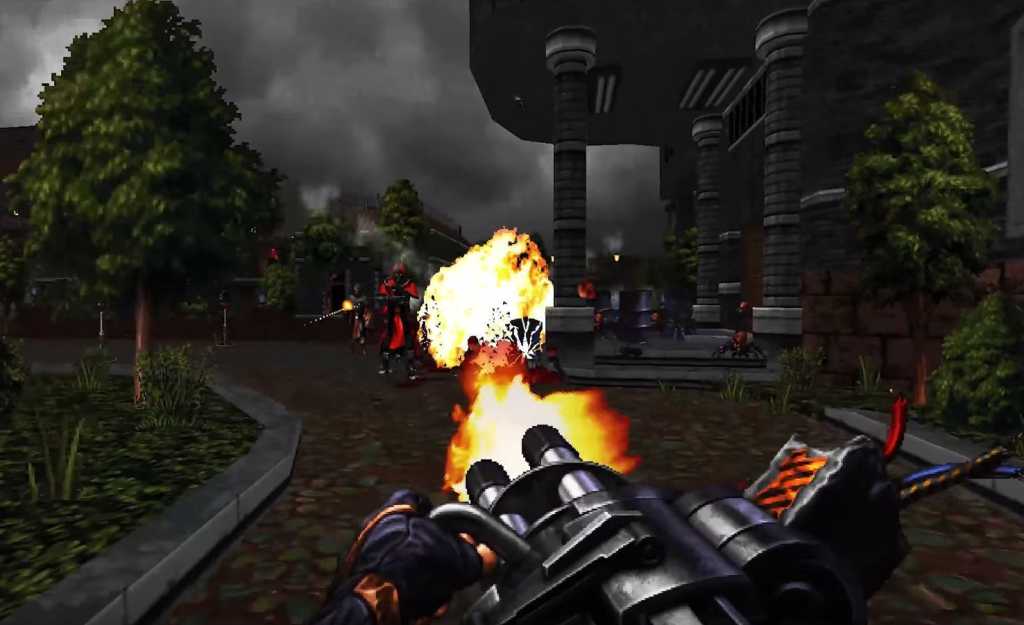 3D Realms is making a new game in the Duke 3D engine the same week Washington D.C. starts complaining about video game violence? It’s like 1997 all over again up in here.

That news, plus rumors Battlefield will head back to World War II this year, David Lynch teaches you typing, the ESRB takes less-than-zero action on loot boxes, and a bevy of trailers for Battletech, Heaven’s Vault, Vermintide II, and more. This is gaming news for February 26 to March 2.

Growing up I remember taking typing classes in school, and then continuing that learning at home with Mario Teaches Typing. I don’t think either helped much, and it wasn’t until the onset of AIM (rest in peace) that I started hitting my current 100-plus words per minute. Still, I’ve got a soft spot for those old educational typing tools, which means David Lynch Teaches Typing is the perfect blend of weird and nostalgia. The “Trial Version” is available for free on itch.io. I recommend checking it out.

The last game 3D Realms put out was Bombshell, and it was terrible. So terrible, that when I first heard 3D Realms was back with another game I was…skeptical, to say the least. And yet I’ve played a bit of Ion Maiden, released into Early Access this week, and it’s surprisingly great.

Feels like I’ve been waiting a long time for Battletech, the mech-tactics game from Harebrained Schemes. I think I first saw it back in 2016? It’s set to release in April though, which means it’s also time for the inevitable marketing run-up to launch.

The first in a new series of trailers went live this week, showing off its turn-based combat—something probably familiar to those who’ve played the ongoing backer beta, but cool for those who haven’t been involved in that process.

Warhammer: Vermintide II is also out soon, and with it come hordes of rats and other Warhammer nasties. Those who preordered are probably already playing the “beta” running this week, but those who have more self-control will need to content themselves with this new trailer. It’s pretty damn good.

Heaven’s Vault is one of my most anticipated games for 2018—an archaeology-centric adventure game from Inkle, the team behind Sorcery! and 80 Days. There hasn’t been much news since we saw the game at GDC last year though, so I was pleasantly surprised to spot a new trailer this week. There are glimpses of the game’s unique 2D/3D hybrid movement, plus the rich dialogue Inkle’s known for, and even a glimpse of the language translation system the game centers around.

None of these projects ever seem to finish, or even to amount to much of anything, but this one by the group Road to Liberty at least has a trailer. There’s even an appearance by Three Dog.

We’re early in 2018, but I’ve already got my favorite DLC picked out. Thimbleweed Park, the superb throwback SCUMM-style adventure game from last year, has a foul-mouthed clown known as Ransome the Clown. Like, really foul-mouthed—except it’s all bleeped out.

Now you can buy the $2 “Ransome Unbeeped” DLC though, unfettering the poor clown and letting the hard-F bombs fly. My favorite quote in this trailer is “You look your dad beeped a pizza,” except, you know, without the beep. Also I promise the line makes sense in context.

Everyone knows there’s a new Battlefield game coming in 2018. That part is certain, and it’s been confirmed by EA executives. Nobody seems to agree what form the new Battlefield will take though. The rumor as of a few months ago was that we were getting a Battlefield: Bad Company 3, set in Vietnam.

Now, a somewhat more plausible rumor says that, no, we’re not getting a Bad Company game at all. Instead, GamesBeat has sources saying Battlefield will return to its World War II roots this fall. Not too surprising, given the success of Call of Duty: WWII and the fact the last game was World War I-based.

But what might surprise you is the name. GamesBeat says EA has been debating both Battlefield 2 and Battlefield V internally, though it’s mostly settled on V. Here’s the thing: Neither of those names makes sense. We already had a Battlefield 2 back in 2005, and if we’re following the numeric values established by the one-two punch of Battlefield 3 and 4 then this would be Battlefield 6.

Those of you who only drop into Overwatch these days when there’s a new character to try out: It’s time. This week Blizzard added Brigitte to the PTR, a hybrid support and tank character who fights with an electronic flail. She also happens to be Reinhardt’s daughter, if you’re keeping up with the lore. Check out her initial trailer below:

Lastly, we come to the video game industry under siege, from all sides. There were major developments on two fronts this week, but let’s start with everyone’s favorite: Loot boxes.

Senator Maggie Hassan sent a sternly worded letter to the ESRB earlier this year saying essentially “Regulate yourselves or we’ll do it for you.” The ESRB finally responded this week with its solution. Or at least its worthless bandage.

Basically, the ESRB will begin adding a new badge to game cases, specifying that there are “In-Game Purchases.” That badge covers literally all in-game purchases, from costume DLC or optional soundtrack DLC all the way to the thing everyone actually hates, loot boxes, meaning it’s…yeah, essentially useless. Like, literally every game will probably have this In-Game Purchases symbol on it because it’s 2018, and literally every big-budget game has optional microtransactions. So yeah, thanks for nothing ESRB.

The specter of Jack Thompson

Loot boxes aren’t the only thing drawing Washington’s attention though. In the wake of the Parkland school shooting last month, the “Video Game Violence Causes Real Violence” argument is raging again, for the first time since probably 2006.

Time and time again research has proved that allegation false, and yet it’s gathered enough momentum this iteration to draw comment from President Donald Trump himself, who said “I’m hearing more and more people say the level of violence on video games is really shaping young people’s thoughts.” Then White House press secretary Sarah Huckabee Sanders claimed Trump would be meeting with “members of the video game industry” next week to discuss the issue—although according to Kotaku, the ESA then said nobody’s actually received an invitation to this hypothetical summit.

So uh…keep your fingers crossed. I thought we put this issue to rest when the Supreme Court gave video games First Amendment coverage, but apparently we have to go through the wringer on this at least one more time. Hopefully the final time.