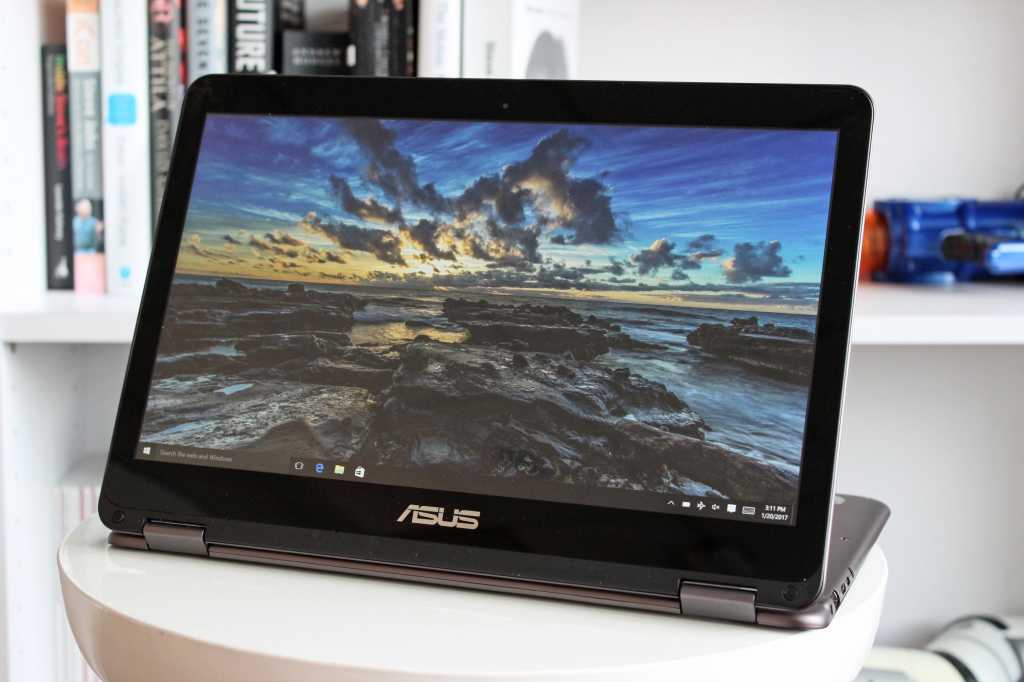 Image: Alaina Yee
At a Glance

The Asus ZenBook Flip might not be quite as elegant and powerful as its primary competition, but it costs a heck of a lot less and can still do the vast majority of the same workloads.

Not everyone needs a beefy laptop, which usually comes with a beefy price. For many folks, a capable, portable, flexible device like the Asus ZenBook Flip is just the ticket. At just $749, the 2-in-1 Flip doesn’t try to be the most powerful or most advanced option. Instead, it offers a slim and portable design that’s affordable and easy to use.

Really, this laptop reminds us a little of the netbooks that existed about 10 years ago. However, unlike those painfully underpowered systems, the Flip’s Core m processor can actually get work done. Storage is plentiful, too: Asus offers two versions of this 2-in-1, and they’re essentially the same aside from the SSD. The base model comes with a 256GB SSD for $699, and the second model comes with a 512GB SSD for $50 more. Our review unit sported the 512GB drive, but our critique applies to both models.

The ZenBook Flip’s most notable feature is its incredible slenderness. At 0.54 inches thick and 2.8 pounds, this convertible is thinner and lighter than rival 2-in-1 machines, and it’s effortless to carry around. The reason for its slim form is that Core m CPU, which sips just 4.5W of juice and thus doesn’t require a fan. Competitors like Lenovo’s Yoga 710 and 910 pack 15W processors.

Almost equally attention-grabbing is a 13.3-inch IPS panel with touch support. It looks semi-glossy to our eyes (even though Asus labels it as “anti-glare”), offers wide viewing angles, and has a sharp picture with great colors. Overall, it’s higher-quality than we expected from a laptop at this price.

The Asus ZenBook Flip has a brushed-aluminum lid, but plastic everywhere else. That said, its 360-degree hinge is sturdy, showing no signs of flex when opening and closing the device.

By contrast, the island-style keyboard does flex quite a bit. Typing on it feels like banging on a cheap piece of plastic, though we love the fact that the keyboard offers full-sized Shift, Enter, and Backspace keys as well as separated arrow keys. Aside from the keyboard’s flex, and the floaty sensation of the trackpad, the notebook feels well-made and more expensive than it actually is.

The ZenBook Flip has a terrific selection of ports, particularly given its diminutive size. You get two USB 3.0 Type-A ports (one of which allows charging even when the notebook is asleep), one USB-C 5Gbps port, a mini-HDMI port, an SD card reader, and a headphone jack. Asus also placed a rocker switch on the Flip’s left side for volume control, which is handy but can sometimes be awkward since it sits right next to the power button.

Two speakers underneath the Flip provide surprisingly good sound that’s just loud enough without going overboard. They’re sufficient for 99 percent of tasks, but folks who want a really loud notebook may still be disappointed when they need intense volume.

As mentioned above, inside you’ll find a Core m processor: a 6th-generation Core m3-6Y30 that runs on a very conservative 4.5W diet. Its lack of fans allows the Flip to run silently at all times, but that design does constrain performance.

The CPU comes paired with 8GB of LPDDR3/1866 RAM, a sufficient amount for the web browsing and office work this notebook was designed to handle. Storage comes in the form of either a 256GB or 512GB M.2 SATA 6Gbps drive, while an Intel dual-band chip provides 802.11ac and Bluetooth 4.1 support.

Nobody expects a notebook with a Core m processor to tear up the benchmark charts, but we were still quite curious to see how the Flip compared to its more expensive rivals. Let’s see how its ultra-low voltage CPU did when put to the test.

Most people use a laptop to do light office work, surf the web, and stream videos. To test how the Flip would survive in a cubicle farm, we fired up PCMark 8’s Work Conventional test. It simulates a typical workload for a desk jockey: spreadsheet editing, document creation, video chatting, and web browsing.

Unsurprisingly, the Flip’s 4.5W Core m CPU gets bested by the more powerful 15W chips in rival laptops, but it still turns in respectable performance. Anything that scores above 2,000 in this particular benchmark should handle daily office work without issue, and the Flip’s result of 2,485 sails over that bar.

For our next benchmark, we turned to Cinebench R15. It stresses a processor by feeding off of CPU cores and clock speeds while rendering a 3D scene. Most ultraportable laptops will finish the task within a few minutes, making the results a good gauge of a processor’s performance for short but heavy CPU loads.

Surprisingly, the Flip wasn’t at the bottom of the list. Among its Core m peers, its Core m3-6Y30 actually outperformed the Core m7-6Y75 in the HP Spectre x2, as well as the newer Kaby Lake Core i5-7Y54 in the Acer Swift 7. Our best guess for this outcome has to do with cooling and how much the Spectre x2 and Swift 7 throttle performance once their processors heat up.

Standing virtually side-by-side with the Flip is its non-touch, traditional-laptop sibling, the Asus ZenBook UX305. That’s not too surprising, since the two machines’ specs are nearly identical, but it’s nice to know you don’t lose anything if you want a convertible instead of a standard laptop.

The one thing these CPU performance charts don’t show is just how quiet and cool the Flip runs. Not directly, at least.

But that design does show its effect in our Handbrake benchmark. This real-world test involves converting a 30GB MKV file into a smaller MP4 using Handbrake’s Android Tablet preset, and it hammers hard on a CPU. For space-constrained notebooks, running Handbrake is a torture test, and shows which manufacturers are willing to turn up the fans and preserve performance and which prefer to throttle down the power in favor of running cool and quiet.

But, as we noted earlier, the Flip doesn’t have any fans. So while this convertible scooted out ahead of the faster-clocked processors in the Spectre x2 and Swift 7 during our Cinebench benchmark, it fell behind the pack when tasked with converting a 30GB MKV file to a smaller MP4 using Handbrake’s Android Tablet preset. Way behind.

The fastest laptop of the bunch, the Yoga 910, finished its task in about an hour and 44 minutes, while the Flip quietly grazed on the file for about three hours and 13 minutes (once again, roughly the same amount of time as the ZenBook UX305). The Spectre x2 and Swift 7, for their part, completed the benchmark in about two hours and 45 minutes.

Nobody will buy the Flip to smash skulls in the trenches of Battlefield 1, but you might want to play light games on this laptop from time to time. To see just what we could get out of the CPU’s integrated graphics, we fired up 3DMark’s Sky Diver benchmark, a synthetic test that simulates gaming at 1080p at roughly Medium settings.

Why Sky Diver, and not Cloud Gate, which tests at 720p? Well, mostly to show you just how much more the 15W parts can stretch their legs, even when also running integrated graphics. HP’s current Spectre X360, a convertible laptop sporting Intel’s latest dual-core i7 chip, manages to eke out a decent score. The rest of the notebooks in the chart are better off sticking to 720p and low-resolution graphics—and in lightweight games at that.

In theory, with its low TDP processor, the Flip should outlast the rest of its competition—but instead, it fell in the middle of the pack during our video rundown test. After queuing up a 4K-resolution movie in Windows 10’s native Movies & TV application and letting it run with the screen set between 250 and 260 nits and volume at 50 percent, the Flip lasted for 433 minutes.

Seven hours and 13 minutes of playback isn’t shabby, but both HP Spectre X360 models, which have roughly the same size batteries but more power-hungry CPUs, lasted even longer. The 2015 model got almost 9.5 hours of battery life, while the 2016 version lasted almost 11 hours. However, you do pay more for the Spectre X360. The ZenBook Flip also managed to last an extra half-hour over its traditional-laptop counterpart, the ZenBook UX305.

Despite falling in the middle or bottom of our benchmark comparisons, using the Flip is a really pleasant experience overall. It still feels snappy and can multitask well: When we had over a dozen tabs open in Chrome, including videos running on YouTube, we could still copy files to the SSD with no slowdowns.

Yes, it has shortcomings, but the’re very tolerable. The Flip feels cheaper in places and more plastic-y (because it is), but it’s also lightweight and thin, and boasts both a decent variety of ports as well as a cavernous amount of storage, plus a damned fine screen. For $749, it might not be quite as elegant and powerful as rivals like the Yoga 910 or HP Spectre X360, but it costs a heck of a lot less while still doing 99 percent of what the more expensive laptops can.