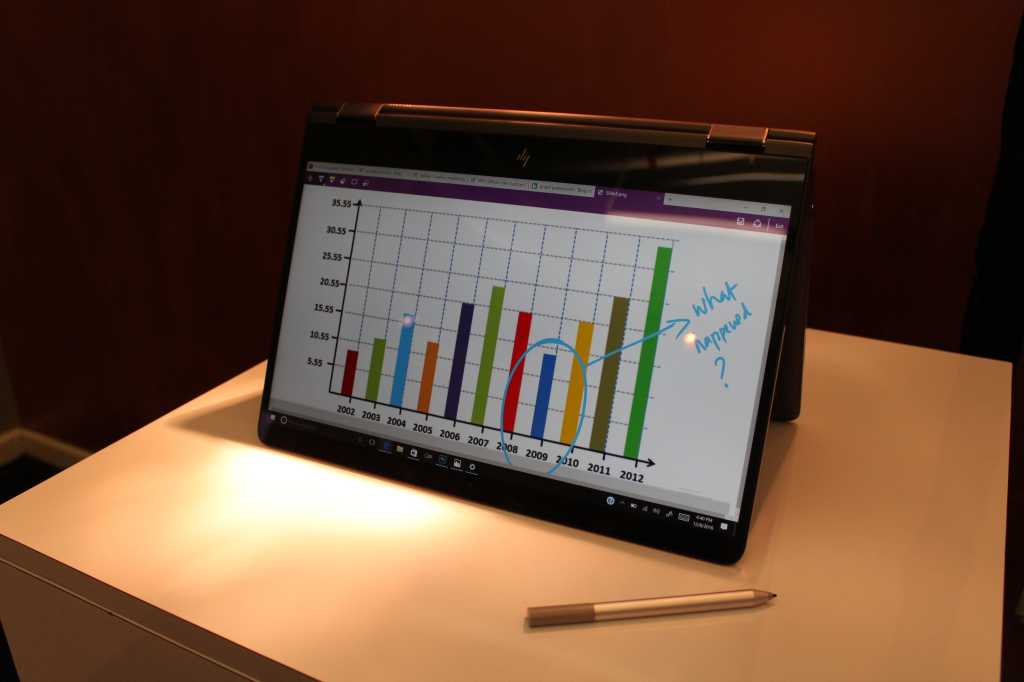 When HP launched the 15-inch version of its Spectre x360 convertible laptop last year, the company said it was for people who wanted a great laptop with a sizeable screen and solid performance—and it delivered on that. If you wanted to do light work on a reasonably thin and light laptop with a large display, the x360 15T provided that along with its flexible form factor: Thanks to its 360-degree hinge you could fold it into a traditional laptop, A-frame, or tablet.

Surprisingly, however, the company has made some unexpected changes to the 2017 Spectre x360 15, which was announced Tuesday at CES.

The biggest change is the lack of a full HD option—the 15-inch x360 will only come with a 4K UHD screen. Though HP says this decision is based on customer preferences, the corresponding increase in battery size whittles away at the x360’s strengths over competing 15-inch laptops. With the move to a larger 79 watt hour battery (versus our 2016 review unit’s 63 watt hour battery), the Spectre x360 jumps up several ounces in weight, despite its sleeker look. It’s actually now slightly heavier than rivals with beefier quad-core CPUs, like the Dell XPS 15.

Yes, you still get only a dual-core CPU in this refresh, though HP has upgraded the Spectre x360 to Intel’s new Kaby Lake processor. A more surprising update is the option of discrete graphics: You can configure the x360 15 with an Nvidia GeForce 940MX. The demo model we saw included a Core i7-7500U processor, 16GB DDR4 SDRAM, a 256GB PCIe NVMe M.2 SSD, and that 940MX with 2GB of GDDR5 memory. Combined with the 15.6-inch 4K UHD touch display, the hardware in the higher-end configurations may result in a shorter battery life than on the previous Skylake models, despite the 2017 x360 15’s larger battery.

One nice update comes in the form of a Thunderbolt 3 port that supports data transfer, power delivery, and DisplayPort 1.2. You do get one less USB port overall compared to the previous Spectre x360 15, though: This year’s model includes just one USB-C port that supports data transfer at USB 3.1 Gen 1 (5Gbps) speeds, power delivery, and DisplayPort 1.2, and a USB 3.1 Gen 1 Type A port. A lone HDMI port is the only dedicated video output, and there’s a single headphone-out/microphone-in combo jack. The SD card reader on last year’s model has also been removed.

Availability is expected to begin on February 26, 2017, with a starting price of $1,280—a $130 increase over last year. With likely still-lower performance than other comparable 15-inch laptops, the Spectre x360 15 may have rougher competition this year, especially since it’s all but inevitable rival laptop vendors will update their 15-inch ultrabooks, too.