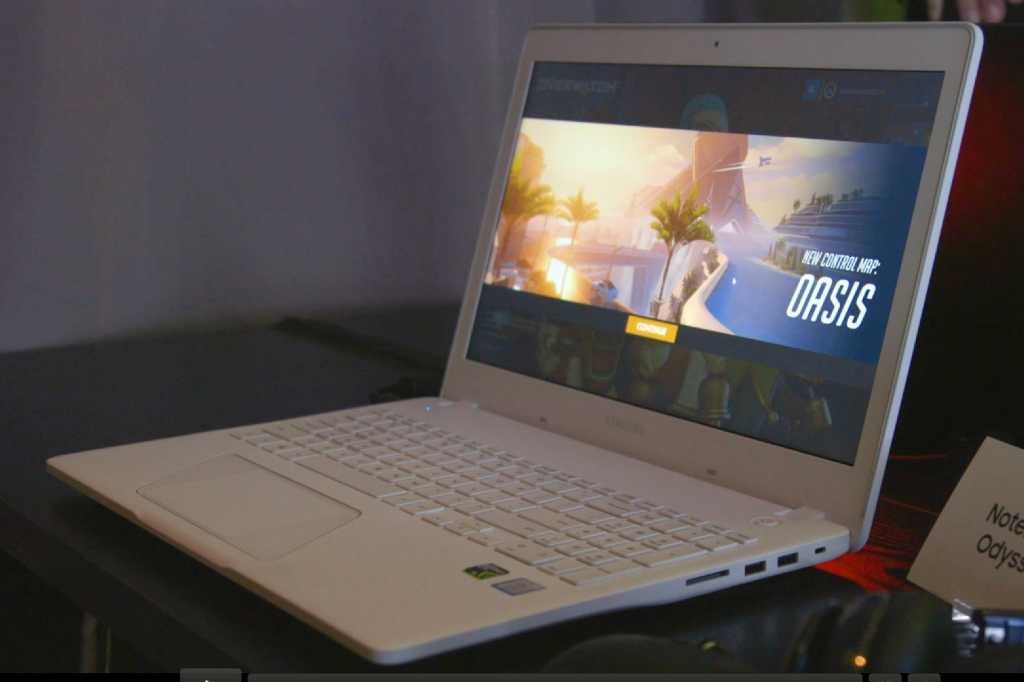 Samsung’s Notebook Odyssey is finally bringing the company into the gaming sphere. What probably happened is that Samsung looked around and realized all the other major computer vendors were already making gaming PCs, and it needed to catch up.

Its first offerings are two well-configured models for mainstream users. While the specs understandably will fall a little short of what hardcore enthusiasts would seek, they’ll suffice for the growing population of consumers drawn to gaming through e-sports or Twitch streaming.

To show it’s serious, Samsung is building upgradability into the laptops via removable panels, and offering one standout feature: An innovative ventilation system called HexaFlow Vent runs along most of the bottom of the laptops, in a visually arresting pattern Samsung calls “dragon scale.”

The 15.6-inch Notebook Odyssey is due to ship in February with a starting price of $1,199. A 17.3-inch model is due to ship later in the spring, price unannounced. They’ll come clad in black or white. Personally, when I see white I think of something else I have to clean, but I’m told that white is already popular internationally for gaming PCs.

The 15-inch Notebook Odyssey will come with up to a 7th-generation (Kaby Lake) quad-core Intel Core i7 desktop CPU, and up to 32GB of 2.4GHz DDR4 RAM. This model will offer two SODIMM slots (the 17-inch model will have four).

For storage you’ll have up to a 256GB PCIe SSD and a 1TB hard drive. You can arrange two SSDs in RAID 0 for faster performance.

The keyboard has LED backlighting and highlighted WASD keys. For individual-key backlighting you’ll have to wait for the 17-incher.

The 43Wh battery should last about eight hours by Samsung’s reckoning. The 17-inch model will have a larger 93Wh battery.

Samsung’s first gaming offerings are solid efforts for consumer-level gamers. Even if the company’s Noteook Odysseys capture just a small piece of the territory already occupied by HP’s Envy, Dell’s Alienware, or Lenovo’s Y and others, it’ll give Samsung a toehold in one of the few growth areas in PC sales.